Rock M Nation is taking a moment from its regularly scheduled cycle of self-promotion and blog whoring to bring you this special blog whoring announcement: 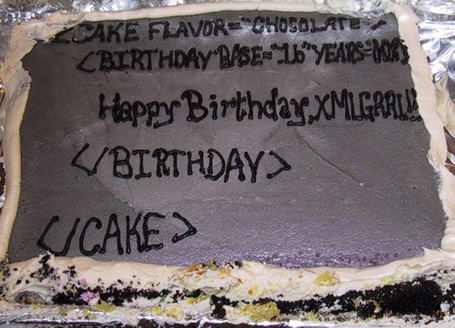 As much as I'd love to sit here and extol the virtues of The Boy, The Beef and myself, there is certainly much dap to be passed around. First of all, we've got to send a big shoutout to the 160,000 or so people who clicked their way onto RMN in its first year of existence. Your hits are the lifeblood that feed this beast.

Secondly, we've got to give some serious love to all our college counterparts at SB Nation. Not only were we welcomed with open arms one year ago, but the constant support and continuing "raising of the bar" by all of our colleagues continues to make Rock M, SB Nation, and sports blogging as a whole a much better place.

Thirdly, I'd be remiss if I didn't send a touchdown handshake and a shot of victory whiskey toward the men of Mizzourah. Here at RMN, we're good for a lot of things (creating statistics, for one), but you aren't going to find greatness like "Good, Bad, and Sleezy" and "Hot Chicks with k.u.chebags" here.

One year ago, Rock M launched with this post detailing our mission:

What I hope you'll see from this blog (and a lot of this depends on who else I can get to sign on here) is far-too-in-depth analysis of Mizzou sports (all Mizzou sports, including lots about wrestling, baseball, and volleyball), combined with a pretty strong look at the Big XII and a general look at college sports as a whole.

So kick back, join in on the discussion, and...screw Nebraska!

So, thanks again. We'll see you tonight in the Live Thread, and hopefully for Live Threads years into the future.