Here are your Monday media notes...

Lee Corso might be doing the Tigers’ defense a favor every Saturday morning. The wily ESPN “College Gameday” pundit picked Missouri to play for the national championship but continues to pick on the defense. He called the defense “lousy” during last week’s show in Nashville. Watching from their hotels in Nebraska, the Tigers were listening.

“Absolutely,” linebacker Brock Christopher said. “We sit in our hotel all day and listen about how good our offense is, which they are, and how we’re not good. We use it as motivation and kind of joke around with it. We take note of what they’re saying and put a chip on our shoulder.”

“Man, it always gets old, but we’ve been hearing that for a while now,” linebacker Sean Weatherspoon said. “Hopefully, he just gives us a little more motivation this week. I definitely make a point to bring it up. On our last walk-through, me, William Moore and Ziggy” Hood “talk about the nay-sayers and how we want to prove them wrong. I think that’s giving us an edge to go out there and dominate.”

More rankings, more love for Mizzou.  This time it's Rivals.com and another #2 spot  Meanwhile, plenty of ridiculous love for Mizzou in Heisman rankings too.  SI's Gene Menez has Chase Daniel still at #1, and Jeremy Maclin #5.  Four of the top 5 candidates are from the Big 12.  I mean, we knew the Big 12 was the best offensive conference, but this is historically good.

Brock Christopher: gaining respect.  If not for Tommy Chavis, I'd say Christopher's been the most underrated player on the team the last couple of years.

I missed this earlier, but the Post-Dispatch has a lovely photo gallery from Saturday's game.

Quick switch to basketball recruiting: Rivals has a nice, long story (with video!) on Michael Snaer and his future.

Finally, because we've gotten a ridiculous number of hits from google searches for this pic, I'll post it again...god bless Warren Buffett. 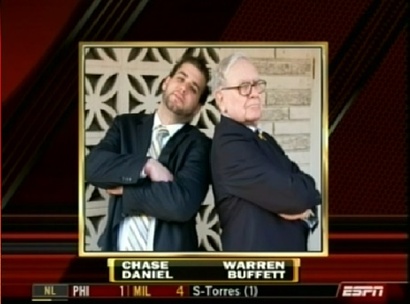