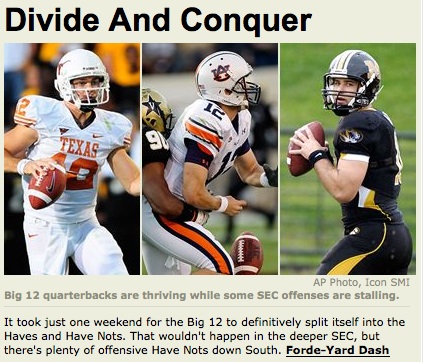 It's great that the Big 12 has four Top 10 teams and all, but as ESPN's Pat Forde points out...it's time for the Big 12's 'have's to start playing each other.

It's Cut to the Chase time!

On the time of possession stat …
“I just saw a stat that we were dead last in the NCAA, which is totally fine with us. We’re the second-leading scoring offense in the nation. I think time of possession is the least overlooked stat in America. I’m glad we’re 119 or 118th. That doesn’t mean anything for us. The only thing that means is our defense is out there a lot more.”

On the pro potential of his teammates …
“That’s a hard one to look at. I think everyone in their own right can play in the NFL. I was out at a camp with T.J. Houshmandzadeh, He was at the Elite 11 camp. He was no faster than Tommy Saunders and no bigger than Tommy Saunders. So, I think Tommy can play. Chase” Coffman “can play. Jared Perry can play. J-Mac. Colin Brown, Kurtis Gregory. It’s ridiculous the amount of people on our offense who can play. You look at Danario Alexander, and I’m sure I’m missing some. So, sorry, if your name gets overlooked. On our offense and our defense, there’s so many higher level players than in the past. And we’re doing a good job in college. That’s not my call for the next level; that’s the GMs around the nation.”

Looks like PowerMizzou's on the same page as our BTBS voters yesterday--Derrick Washington was the NU game's best player.  And the Trib has some good news: Washington's only getting started.

Not much to be argued with in regard to Stewart Mandel's latest SI power poll...

Finally, be sure to catch Mizzou Volleyball on Fox Sports at #16 Kansas State in Columbia and Kansas City tonight.  It probably won't be too pleasant an experience, but...hey, they'll be on TV.