Lake the Posts on Sutton's availability

Share All sharing options for: Lake the Posts on Sutton's availability

With Mizzou basketball hopping into the Top 25 and then proceeding to pummel Mizzou fans in the babymaker worse than a French skiing accident by laying an absolute egg against Illinois, you may have forgotten: We're very quickly approaching kickoff for the Alamo Bowl. 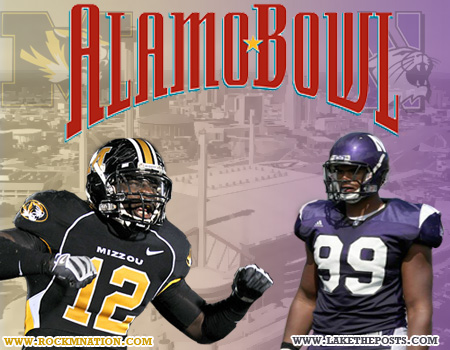 Obviously, the big news out of the Northwestern camp is the availability of halfback Tyrell Sutton, whose presence adds a separate dimension to the Wildcat offense. For a homer perspective of what this means to Northwestern, we turned once again to our friends from Lake The Posts:

"Tyrell Sutton in the lineup is the single most impactful change to our offense you could have. The poor kid has been plagued by injuries for most of his career. After capturing Big Ten Freshman of the Year honors in 2005 he has lost a step, but not his passion. Our O-line's run blocking is below average and thus, when he was in there it appeared as though he was having a down year. Not true. He has been lauded as the best receiving RB in the nation and it is this dual-threat that makes our offense really click. If you want to see the best example of this watch the Iowa highlights.

Sutton is amazing at catching the ball in the flat and making players miss. He is a warrior between the tackles and has a motor that never quits. In year's past he even had the breakaway speed that had him on track to shatter every NU rushing record. He won't since he missed a full season of games during his junior and senior seasons, but most NU fans have been willing him to return in hopes that our offense can get its old self back again, but also so he could have a chance to go out with the ultimate last game experience - a bowl win.

The true question is whether or not he will even resemble himself. His left wrist was reportedly a mess and considering I'm not a doctor I have no idea what impact it will have on his game. I get the sense he won't be 100%, but any NU fan will take a 75% Sutton over a 100% Simmons (no disrepect to Simmons)."

For those of you with soft spots for numbers (cough*The Boy*cough), here are Sutton's cold, hard stats: