Share All sharing options for: Mizzou 25: It's Ben Askren Day!

Over the next couple days, we're going to be taking a community look at the two finalists before the finals at the end of the week.  First up is the champion of the Joann Rutherford Region, Ben Askren.  To get to the finals, Askren defeated Renee Kelly (91%-8%), Christian Cantwell (88%-11%), Lindsey Hunter (80%-19%), and Anthony Peeler (61%-38%).

Share your Askren thoughts, stories, videos, and links in comments.  I'll add some to the post itself as the day progresses. 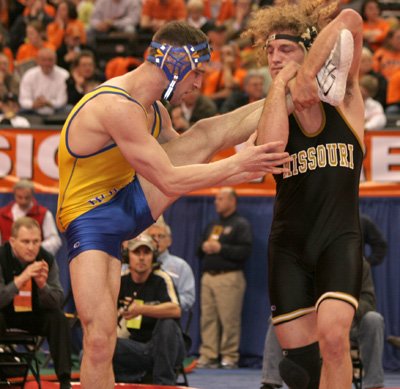 (Credit to the Columbia Tribune, Tech-Fall.com, and Daylife.com for the pics.)

"Ben is a leader in the community, at the University and in the wrestling room," Head Coach Brian Smith said. "Ben's goal for the season is not only to become Missouri's first two-time NCAA champion, but also to help the team to the program's first National title. Ben's commitment to the sport of wrestling is amazing and I consider myself fortunate to have worked with him over the past five seasons."

"There's nothing more frustrating to me than having an opponent stall. Especially when the ref refuses to call stalling just because I'm wining the match. I try to make all of my pinning combinations as painful as possible so they really don't want to be on the mat with me."

"We had just got done with practice and Ben came into the room and he was crying," Pell says. "I had never seen Ben cry. He looked awful, like something terrible happened. I was like, 'What's up, man? What's wrong?'

"He said, 'I'm not explosive enough. I'm not strong enough. I want to dominate my opponents and I don't have the natural ability. I don't have the fast-twitch muscles like good college wrestlers have.' I remember laying in bed thinking about it. I had never seen Ben doubt himself like that.

"I could tell that day is when he made a decision that if he's going to win a national title he's got to change his style. That's when he started developing this whole new style that he's got."

Q: Any other talents?

A: No, not really. Wrestling. Disc golf. I do all right in school.

Q: You've got the T-shirt with your picture that says "Funky," and I understand you've got a new one. Can you describe it?

A: It says, "Askren Labs," and it has me in a science coat. I'm holding a beaker that says, "Funk." On it, it says, "Doing to wrestling what BALCO did to baseball: making it interesting."

Q: How are the T-shirt sales going?

A: We sold quite a few in Detroit, but then my salesman got kicked out of the building. It would have went better had that not happened. He actually got kicked all the way out of the parking lot.

Mixed martial arts is becoming one of Askren's favorite hobbies and he is seriously considering making a career of it once he retires from wrestling.

"I think it's the most natural competition to man," said Askren, who is now training for the Olympic trials while serving as a volunteer assistant coach for the Tigers. "It's one man versus another man. There's no weapons, you go in there, mix it up and whoever's the best is the best."

Once he finishes his wrestling career, how likely is it that Askren will make the transition from the mats to the octagon?

"It's going to happen," Askren said. "Unless I get a (Division I) head coaching job in the next year and a half, which the likelihood of that is close to zero."