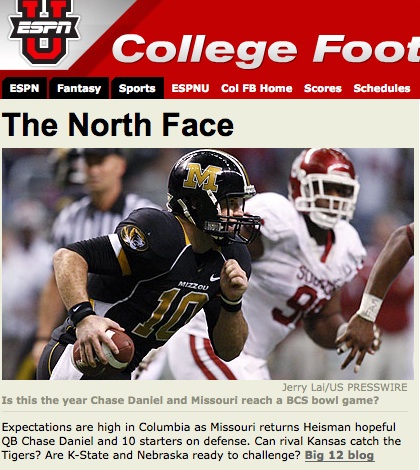 That's right...it's back to the front of ESPN's College Football page for Mizzou, as the Dot Com continues with its Blue Ribbon previews (Mizzou's is free!). I'm always torn about the Blue Ribbon previews--they're detailed and informative, and they read well, which is great...but they're never completely current or accurate.  People are listed at the wrong position, injuries are missed...things like that.

Tim Griffin also gets rolling with his Big 12 blog on ESPN as well.  So far, so good...among other things, he's got a decent set of North predictions and North questions.  From the predictions:

1. Missouri will be a better team this season than last season. The Tigers have quarterback Chase Daniel and do-everything offensive threat Jeremy Maclin back, too. But the biggest reason I expect to see improvement by the Tigers into a BCS bowl game is because of the development of their defense.

2. Even with players like Daniel, Michael Crabtreee, Graham Harrell and Sam Bradford returning across the Big 12, the most valuable player in the Big 12 will be Nebraska RB Marlon Lucky. The Cornhuskers desperately need him to match or surpass what he's accomplished for them before. A consistent running game will be important as new Nebraska coach Bo Pelini tries to mask the deficiencies of his defense. The best way to do that will be a solid ball-control offense led by Lucky.

Eesh...I'm just not sure about this yet. Lucky's been a victim of insanely high expectations after arriving in Lincoln a 5-star RB savior...I guess there are things he can do that no other NU back can, but...yeah, we'll see...I'd say Chase Daniel or Todd Reesing are more important.

A couple of quick recruiting links: 8-foot-tall Arkansas WR Neal Barlow visited Mizzou recently, and they're at or near the top of his list now.  Meanwhile, Ronnie Wingo visited Illinois (who got a surprise commit from Nathan Scheelhaase this week) recently, and he'll be visiting Alabama next week...but Mizzou fans have to be encouraged by the fact that Wingo's stopping back by Columbia with his dad after the trip to Tuscaloosa.

And while we're at Rivals...new Rivals writer Tom Dienhart has some complimentary things to say about Chase Daniel and Mizzou today.

There's Daniel, with a towel tucked in his black shorts, gathering the quarterbacks and receivers for a quick briefing on what today's workout will include. Daniel is one of the smallest guys out there. Your program says he's 6 feet tall, but he's more like 5-10-and-change in cleats. The best way to describe his body? Bulky, bordering on squatty. Daniel is the poster child for "looks can be deceiving."

There's Daniel, taking that familiar shotgun snap we've seen so often on glorious Saturday afternoons in Columbia the past two seasons. He glances to his right, pump fakes and arches a strike to streaking Jeremy Maclin. Touchdown!

There's Daniel, holding a play card as he watches the second-team offense work. He looks like a coach. He acts like a coach. Daniel doesn't like what he sees and shakes his head. He scurries to a receiver and tells him how the route should have been run. Coach Gary Pinkel would be proud – if he were here.