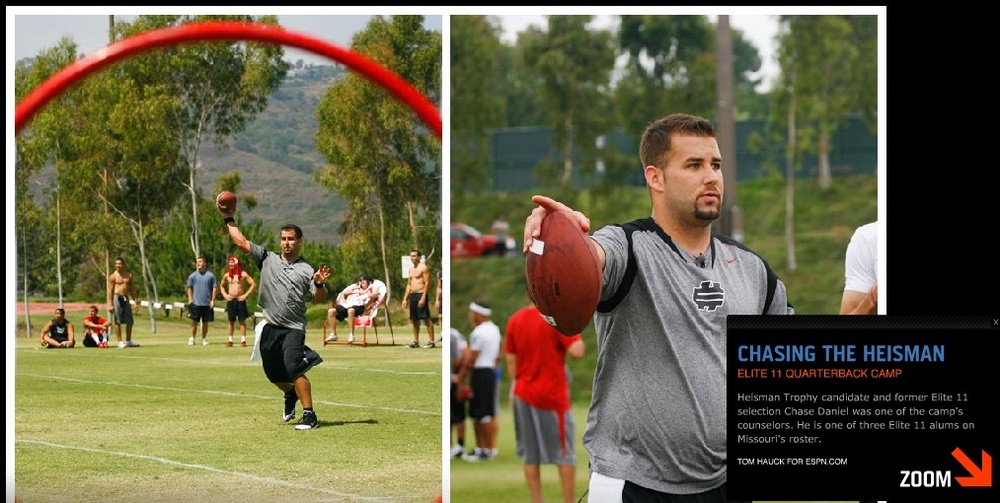 ESPN's getting all high-tech with their Elite 11 Camp photo gallery, but it's worth perusing nonetheless...

Rivals.com's Top 25 countdown has reached #5...which is where we find Missouri.  On a trip to a Royals game this weekend, a friend of mine asked me who would be in my top 5 overall.  I said it depends on how you answer the question--whether you're taking schedule/record into account, or whether you're just asking "who are the best 5 teams?" Going with the latter, I decided to set up a hierarchy based on head-to-head matchups.  Who do I think would beat Missouri on a neutral field right now?  USC?  Yes, I think they would beat us.  Oklahoma?  Yes (though I would love to get another shot at them).  Ohio State?  No.  Florida?  No (that game would be fun as hell, though).  Clemson?  No.  LSU?  Oy.  I think they're one of the few teams that could be as disruptive on the D-Line as OU was on us last year...but their offense is containable.  So I'll say no.  Georgia?  No freaking idea.  I think we could hold them to 28 points or less, so the question is...do I think we could score more than 28?  The homer in me says hell yeah; the "you're probably being too much of a homer" in me says probably not.  So depending on the answer to that one, I'm putting Mizzou in the #3-#4 range for now.  Taking schedule into account, we could easily finish ahead of Georgia, but obviously Ohio State rears its ugly head.

PowerMizzou's got a recruiting article on a Utah LB with ties to Missouri.  His name?  Austin Gumucio.  Awesome.

Another notebook-style Big 12 Media Days article from the good folks at the Trib.  This one only touches on Darrell Scott, Josh Freeman, Van Alexander, KU, MU-UT, the wishbone, the OU hoax, Atrell Woods, and an ATM QB battle.

After helping to empty that giant notebook, Dave Matter headed to his blog, where he continued his Top 25 and took on the Nebraska Media Guide (and the 10th anniversary of Curtis Jones' death).

What would it take to get Pinkel to leave Missouri?  A lot, Tim.  A lot.

Finally, it's 12 days till the Olympics, and get this!  Ben Askren's confident!

Plenty of wrestling observers didn’t think he could make a successful transition to freestyle quickly enough to get to the 2008 Olympics. Ben’s high school coach and close adviser, John Mesenbrink, wasn’t one of them.

Mesenbrink is also kind of like a sibling to Askren, an older-brother figure who always supports him. He will be going to Beijing, too. He arrived as wrestling coach at Arrowhead High in Hartland, Wis., in Ben’s first year there.

“I remember when he was a little 119-pound freshman, and he said that (making the Olympics) was his goal,” Mesenbrink said. “And here it is; it’s going to happen in Beijing. I’ve learned what he says is going to happen.”

So when the conventional thought in the wrestling community was that Ben’s best bet for the Olympics was 2012, he dismissed it. He was going in 2008.

“I didn’t doubt it because once he sets his mind on a goal, he’s just relentless,” Mesenbrink said. “So many times, I’ve seen obstacles that stand in his way, and he finds a way to overcome them. I knew he would technically figure it out, and he likes to put the pressure on himself. It helps him rise to the occasion.

Mesenbrink chuckles when talking about this, as he has gotten used to it. But Ben’s parents, Chuck and Michele Askren, admit they sometimes worry a lot.

“He seems to have supreme confidence,” Michele said. “And most of the time, it just makes us nervous. You know, every parent fears their child having to deal with the disappointment. You cringe a little when they are almost over-confident, but … I guess that’s what it takes.”