Before we embark on a four-month journey that will either result in a) the greatest season in Missouri history or b) a couple (or few) of the most hard-to-take losses in Missouri history, I want to ask a question: If you were asked to create a list of your favorite Mizzou moments before 2007, what would have been on it?  Beating Nebraska in '03?  Winning the Independence Bowl?  Winning the Insight.com Bowl?  A stolen moment like Brad Smith's go-ahead TD against OU in '02 or Eddie Jones' go-ahead TD against NU in '97?  Older fans can maybe pull in memories of beating Notre Dame (on the day my mother went into labor with me) or Nebraska in '78 or USC and Ohio State in '76.

Chances are, a re-drawn 'Top 10 favorite moments' list could have at least 5-7 from last year now.  Pig's fumble return...the sea of gold (okay, yellow) against NU...the four quarters of near-perfection against Texas Tech...the three quarters of absolute perfetion perfection (whoops) against Colorado...Jeremy Maclin's kickoff return...every moment of Armageddon at Arrowhead...the week at #1...the Heisman finalist...every moment of the '08 Cotton Bowl.  And most importantly, a 12-win season.  Finally, moments built on top of other moments.  One great win wasn't followed by an inexcusable loss.  It wasn't a perfect season (thanks a lot, Oklahoma...why couldn't you play against us like you played against CU or Tech or WV??), but it was almost perfect.

And it was certainly perfect redemption for one man.  Here's what I wrote almost exactly a year ago:

The bottom line is, despite the fact that Mizzou has improved in five of six seasons under Pinkel, the one season they didn’t (2004) has defined Gary Pinkel’s tenure to this point. And it will continue to do so until Mizzou overachieves in the same way they underachieved that year. Simply exceeding handicapped expectations isn’t enough.

If you haven’t noticed, Mizzou’s exceeded expectations each of the last two seasons (and really, in four of the last five). The 2005 Tigers were picked by most to crash and burn and quietly finish off the Pinkel Regime. They lost to New Mexico and Kansas in beyond-aggravating fashion, but thanks to some Chase Daniel magic against Iowa State and some Brad Smith magic against South Carolina, they finished 7-5. At the beginning of the season, 7-5 would have been a welcome bounceback to 2004. At the end of 2005, 7-5 seemed disappointing.

In 2006, Mizzou was picked preseason #5 in the North. They were supposed to struggle to make a bowl game while turning the page on the Brad Smith era. As I’ve pointed out, the Sporting News picked them to lose to Ole Miss at home. Well, they went 8-5, exceeding preseason expectations...and it felt a bit disappointing. In other words, Gary Pinkel’s teams are experts at exceeding expectations in the most disappointing way possible, even going back to 2002 (predicted to suck, but Brad Smith emerged...and went 5-7) or 2003 (8-5 was quite a lovely step forward, but it still came with super-annoying losses at Colorado and Kansas). Mizzou flashes more potential than others thought they had, then pulls a Lucy Van Pelt (or, I guess, a Tony Romo) with the football.

Pinkel needs to win and win big in 2007. Not necessarily because he’ll get fired otherwise (it would probably take a 5-7 season for that to happen, possibly 6-6) and not necessarily because Nebraska is about to distance itself from the rest of the North. I’ll believe that when I see it (how are the four Heismans for Harrison Beck and Marlon Lucky coming along?). No, he needs to win big because, as I’ve mentioned before, we’re one or two steps away from the dreaded Glen Mason Territory, where a coach at a mid-level school establishes his program enough to go 7-5 every year but never turns a corner. To me, 7-5 this year is the worst-case scenario because he won’t get fired, but he’ll have missed another opportunity to turn a corner and prove himself to future recruits.

That, and he needs to win because this year’s team is the most talented Missouri team in 25 years. Chase Daniel > Brad Smith and Corby Jones. Tony Temple > any Mizzou RB since Devin West. Will Franklin, Danario Alexander, Jared Perry, Jeremy Maclin, etc. > any Mizzou WR corps I’ve ever seen. All-world TE Chamartin Ruffman > Kellen Winslow (combined, not individually...and yes, Barking Carnival, Coffman and Rucker are as good as people say...in fact, the ‘lazy media’ is why Martellus “Rivals 5-star” Bennett is being rated above either or both of them in most publications despite all on-field evidence to the contrary).

For the last three years, I’ve constantly defended Gary Pinkel from attack...mostly from Mizzou fans. Which is funny, because I still have no idea if he’s a great coach or just a pretty decent one. As I’ve said before, he’s extremely classy, and he does everything the exact way I want a coach of my school to do...other than win big. Now it’s time for him to check that one off the list as well.

Done and done. Ironically, after exceeding expectations in the most disappointing ways possible for most of his tenure, Pinkel's team only met expectations last year (win the North)...in the most exciting, redeeming way possible.  Funny how things work out.

So where does this program stand now?  To answer that, we'll take a look at the past, present and future.

It's funny how one season can even change how you view your program's history.  Demons?  Exorcised.  Mizzou penalty/"Pinkel factor"?  Gone (for now).  Now, there's no back story, no "Yeah, they look good on paper, but they'll blow it."  Just this:

Mizzou Wins Per Season under Pinkel (with trendline) 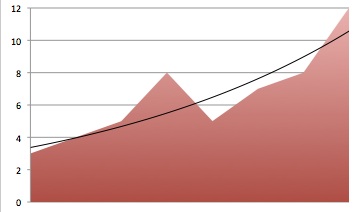 I don't really have anything new to say about the 2008 season.  Anything could happen--injuries, unlucky bounces, bad decisions--to prevent Mizzou from being in the national title game 5+ months from now.  I mean, even USC, with all that talent and recruiting success, doesn't win the national title every year.  But the guys wearing the black and gold this make up the most talented, most athletic, most successful, and most together Mizzou team anybody under 50 has ever seen.  Even after the once-in-a-lifetime fun of 2007, most of the key components came back for an encore.

Oh yeah, and we've got the most accomplished Mizzou coaching staff roaming the sidelines (and booth) since Dan Devine left for Notre Dame.

The "future" is the biggest question mark here, right?  Ask any Nebraska fan, and they'll tell you that Mizzou will immediately return to mediocrity the moment Chase Daniel walks off the field for the last time.  And until Mizzou proves them wrong...well...we can't prove them wrong.  All we have is belief that this program is here to stay.

Last time a senior-laden Mizzou squad left Columbia having won a new(ish) level of games and having convinced a fanbase that the program had turned a corner for good was 1998.  Exactly one decade ago.  Mizzou followed up on its first bowl win in over 15 years by winning four fewer games, finishing the season with three losses by a combined 154-14, and shocking Mizzou fans by the dearth of talent remaining on the field once Corby Jones and Devin West had packed up and left.  So for those worried about (or hoping for) a similar talent dropoff in 2009, let's compare the 1999 pre-spring depth chart to the projected (by me) pre-spring depth chart for 2009.

(And yes, I'm assuming Jeremy Maclin goes pro.  But I'm not sure about Sean Weatherspoon yet, so he stays.  And I'm not going to do anything with current committed recruits, other than at QB, where I need them to fill out the 2-deep.)

So 2009's Mizzou team looks better than 1999's at 9 of 11 offensive positions, 7 of 11 defensive positions, and across the board on special teams.  Plus, 25 of 44 offensive and defensive slots on the 2-deep will be filled by freshmen, RSFr's, or sophomores.  Plus, the coaching staff is more accomplished (even if we lose a coordinator to a head coaching position after '08), younger, hungrier, and (most importantly) more flexible and adaptable.  PLUS, recruiting is at best improving, and at worst steady as hell.  PLUS, the North division isn't what it was in 1999, when three teams were either in the Top 5 (Nebraska) or about to be (Colorado, Kansas State).  The North is improving, but not to that extent.

It's impossible to predict whether Mizzou will ever return to its 2007 heights under Gary Pinkel or anybody else.  Anytime a program accomplishes something it had never accomplished (12 wins), you can't assume it will happen again.  All we can do is look at the overall health of the program, and right now things certainly look pretty good.  And that will likely remain the case even if 2009 only results in 6-8 wins.

I've mentioned before how redeeming and uplifting 2007 was for not only a lifelong Mizzou fan, but for a Pinkel supporter.  I believe I even uncorked an "I was right, you were wrong" middle school taunt toward "Fire Pinkel! Hire Gary Barnett!" advocates at one point (or two).  But I'll leave the taunting behind me--the program and the fanbase are all in the same place now, and I guess that's all that counts.  Mizzou has arrived (for now).

At this moment, the Mizzou fanbase lives in a world where a) Mizzou is legitimately in the nation's Top Tier for 2008, b) two Heisman candidates wear black & gold, c) the Mizzou coaching staff is not only loyal and talented, but also classy, d) Mizzou is a true "team" full of class acts and people you don't have to feel guilty for rooting for (no Michael Clay's or Travis Garvin's...and for that matter, no Peter brothers or Lawrence Phillips either), e) Mizzou has the facilities and atmosphere necessary to woo top recruits and continue building and improving for the future, and f) Mizzou's past, present and future have been redefined for the better.  And I'm going to bask in that...