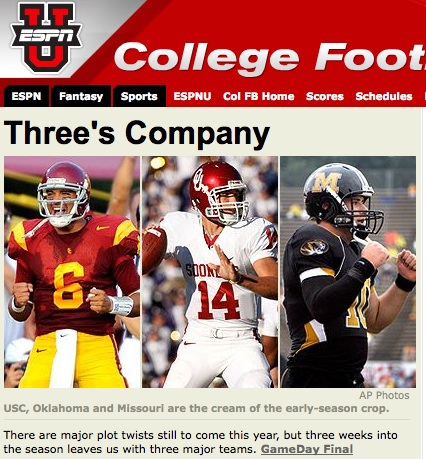 You just don't get tired of seeing this. We have either 10 or 11 games left watching this amazing offense.

ESPN's Pat Forde talks about the three teams who have proven themselves to be in the top tier: OU, USC, and Mizzou.

Oklahoma has cranked up its passing game to another level in routing Cincinnati and Washington. The Sooners are scoring points in gushes, pushing quarterback Sam Bradford up the Heisman Trophy lists.

But he isn't even the leading Heisman candidate in his own league. That would be Missouri QB Chase Daniel, who has more touchdowns (seven) than incompletions (six) the past two weeks. Which is just silly. The Tigers put 52 on Illinois in the opener, 52 more on Southeast Missouri State and then a whopping 69 on Nevada (a 2007 bowl team) on Saturday.

Missouri and Oklahoma don't meet in the regular season, which could make the Big 12 championship game slightly enormous (if both of them can beat Texas, among others, in a salty league).

Well, the volleyball didn't do too hot this weekend, laying an egg against a mediocre Nevada team Friday night and getting bumped by #24 Pepperdine early Friday before sweeping UC-Davis to salvage something from the weekend at the University of Nevada AT&T Invitational.  They now stand at 5-4.

Soccer, however, had themselves a nice home weekend between the raindrops.  First they stomped previously undefeated Vanderbilt, 3-0 (extra notes here), then they took out Butler, 2-1, last night.

Finally...another day, another old Mizzou coach The Beef stumbled across: this time it's former D-line coach Dave Toub.  If you think about it, the only reliable unit on those '99 and '00 teams was the D-line, so I guess it shouldn't surprise me that Toub is still batting around at a high coaching level.