Share All sharing options for: The State of Missouri Basketball (Part Two)

Yesterday we looked at the state of Mizzou Basketball in 2008-09.  Today, we look forward.  Right now, Mizzou stands to lose three scholarship players for 2009-10: DeMarre Carroll, Leo Lyons and Matt Lawrence.  Before we make any judgments about how much of an impact the loss of those guys will have, we'll need to look at how the depth chart looks for 2009-10.  And before we do that (tomorrow), we'll need to check on recruiting today.

It was said early on that if Mizzou landed Dixon, it was a successful recruiting class no matter who else signed.  If they didn't, it wasn't.  Well...they did.

Honestly, to listen to the hype around Dixon, it reminds you a lot of the hype around Jimmy McKinney at Vashon in the early-'00s.  First, those who had seen him were baffled as to how he didn't have a 4-star ranking via Rivals (Dixon did before being downgraded for some reason).  Second, it was said that his best trait was that he was a "winner" and a "leader," a "team first" player.  Third, they both have strong scoring potential, including a 3-point shot that, while streaky, is an effective weapon.

Honestly, McKinney never really lived up to the ridiculous hype cast upon him, and while Dixon's local hype isn't at quite the same volume, it's growing, especially after his dominant performance in the Liberty Invitational this past weekend.

It was hoped that Dixon would be part of an outstanding Class of 2009 backcourt with Michael Snaer, but Snaer signed with Florida State.  Either way, Dixon will join a crowded backcourt that loses only Matt Lawrence from the '08-'09 roster.

DeWitt is a late bloomer--he really didn't play basketball until high school, when presumably his post-growth spurt figure made him think he should give the sport a shot.  He has played at Charis Prep for a while now.  He averaged 17 & 11 there in 2007-08 (I can't find any 08-09 stats), a season which resulted in offers from OU, OSU, N.C. State, and Florida State, among others.  He doesn't appear to have too lanky a frame, and he might be able to put on enough weight that he doesn't get pushed around inside.  I'm going to assume DeWitt will be a more long-term prospect and not necessarily a difference-maker for 2009-10, but you never know.  You can't coach size, et cetera.

They have two more scholarships to give in the spring, and here are some of the candidates from Rivals.com: 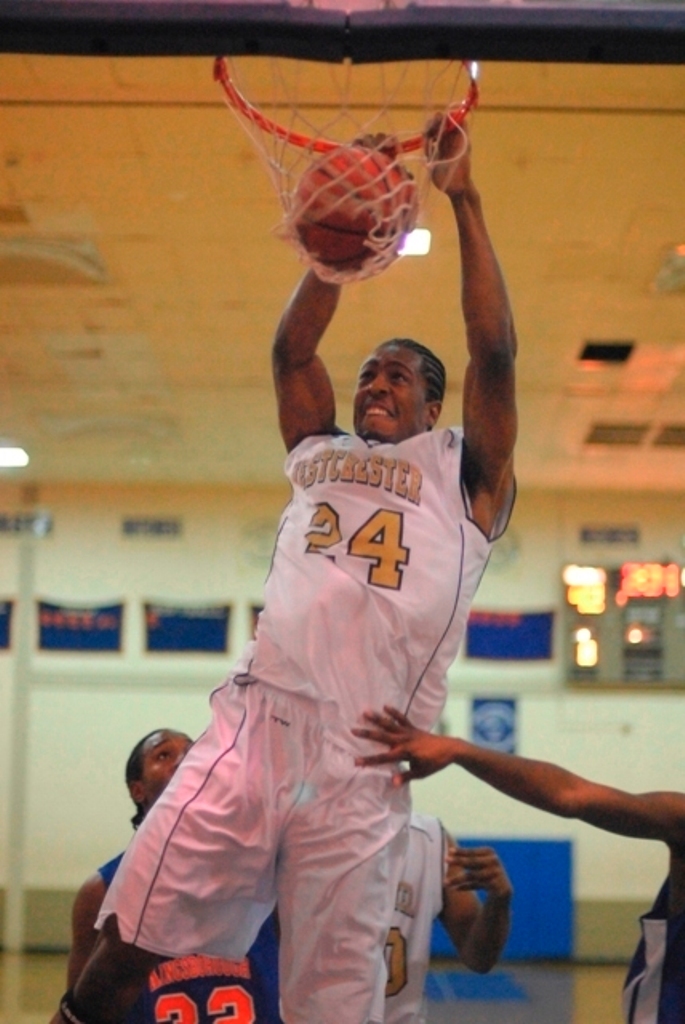 A late name to emerge from the JUCO ranks, the awesomely-named Famous sits on offers from Missouri, Xavier, and most of the bottom half of the Big East--DePaul, Seton Hall, Providence, and Rutgers among others.  Famous' coach spoke highly of Mizzou's chances back in October, but there hasn't been much of an update on him since.

So far this season, Famous is averaging 23.8 PPG and 13.6 RPG.  He is shooting 53.9% from the field and 67.1% from the line.  He turns the ball over quite a bit (2.9 TOPG), but he does pass pretty well (2.1 APG) and block shots (2.2 BPG).  His outstanding performance this season could lead to more scholarship offers this spring, but since there hasn't been an update on him in quite a while, it's hard to tell where anybody stands.  You have to figure that after football signing day in February, attention will shift back to basketball recruits--that's generally how it works.

Needless to say, judging from his stat line, this guy would be a WELCOME addition to the '09-'10 squad.  He is probably the biggest name left on the board now that DeMarcus Cousins seems to have officially eliminated Mizzou from consideration (again).

While Famous' name has been floating around a while, honestly all we seem to know about Sabour-Pina is that he has a Mizzou offer (via the Rivals db).  From articles written during AAU season over the summer, it appears that Sabour-Pina's game is based around defense, rebounding and shot-blocking.  Oh yeah, and dunks.

Honestly, if he's only 6'7, how short are the other guys on the court??  He's like a foot taller than everybody else!  This site has him listed at 6'9, so...yeah, who knows.  He's a name to watch in the spring, though it's impossible to tell how much interest he has in Mizzou, or vice versa.

Mizzou appears to be paying more attention to Hall as of late, and he could be on the verge of getting an offer, if he doesn't have one already (Scout.com says he does).  He appears to have a rough top 5 of Mizzou, Oregon State, Oklahoma State, Memphis and UAB, though none of those schools are known to have offered.

Because I like Laurence Bowers so much, I'm naturally drawn to recruiting another 6'7, 210 forward from Memphis, but there's nothing saying their games even remotely resemble each other.  All I know is, he's bulked up, he's averaging 14 PPG on a team that has Rivals' #3 player of 2010, and he's on Mizzou's radar.  We'll see.

Since basketball recruiting has taken a backseat to football recruiting over the winter, it's also obviously possible that Mizzou has been focusing on an entirely different cast of potential characters over the last month or two.  It's probably pretty safe to say, though, that Mizzou will either give out the two remaining scholarships to a big and a small forward, or two bigs.