This is the third and final installment of the "Sooner Disrespect Chronicles," which follows the Oklahoma Sooners as they prepare for their Jan. 8 meeting with the Florida Gators in the BCS National Championship Game.

NOTE: I would sincerely recommend reading the first two before reading this one. Otherwise, you might be a bit confused.

PART ONE: 'The Sooners Have a Gift Exchange'

SCENE: The Sooners, having just completed their final preparations for the BCS National Championship Game, sit in the locker room at Dolphin Stadium just one hour before kickoff. 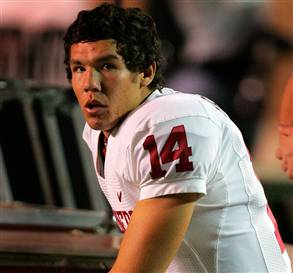 SAM BRADFORD: (nervously twiddling his thumbs) Oh good gravy, is this nerve-wracking. We're about to take the field for the national title. The big game! It's about to happen! Sweet sassafras, I hope I play well.

JERMAINE GRESHAM: (pacing) You're telling me! This could be our last college football game ever, Sam! And we've got a chance to go out as legends, to bring our school its eighth national title and join the greats of all time.

GRESHAM: And I'm counting on you, Sam. But we can do this. And no matter what happens, we'll always be the best of... 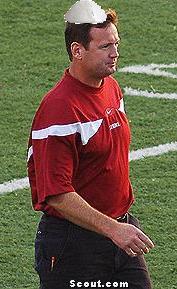 BOB STOOPS: Shalom, men! Let's all gather round and take a knee!

GRESHAM: Hey coach, what's that on your head?

GRESHAM: Um...since I was born? 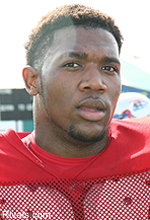 FRANK ALEXANDER: WHAAAT?!? DISRESPECT?!? FROM MY OWN TEAMMATE?!?

/rips locker off the wall, winds up to hurl it at Gresham

STOOPS: (holds up his hand) Hold on, Frank, you mensch. Jehosephat said he was sorry. Save it for the field.

/puts locker down, settles for burning down an orphanage

STOOPS: Now, as Jameson asked, this is my yarmulke. It's a traditional head-thingy for me and my Jewish brethren.

STOOPS: What the hell are you talking about, Bradford? Of course I'm Jewish! I just came back from Jewish church!

STOOPS: WELL CHECK OUT THE BIG BRAIN ON BRADFORD! My my, Sam I Am, aren't you Mr. Multi-Religion! Now why don't you shut your cakehole and let me talk?

STOOPS: Anyways, men, as you well know, there have been some words exchanged in the press with Florida. It appears that Brandon Spikes thinks we're "a step slower."

ALEXANDER (with fire in his eyes): RAWWWWWR!

STOOPS: Not that I've made a big deal of that. I never do that kind of stuff. I'm not a "bulletin board" kind of guy.

GRESHAM: Sir, you made hundreds of posters with Spikes' picture on it with the quote underneath it. And you put them in our lockers. In fact, most of them have lights on the outside of them. See? 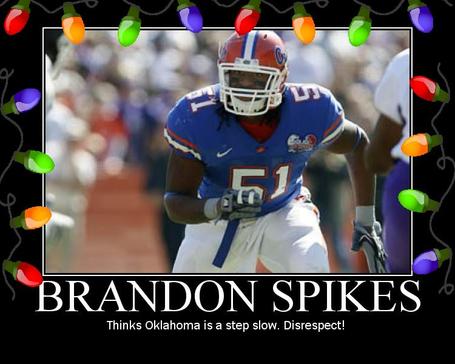 STOOPS: Are you still here, Jocelyn? GET YOUR ASS OUTSIDE AND KEEP BILLY SIMS ENTERTAINED!

STOOPS: Anyways, as I was saying, we've definitely felt our share of DISRESPECT in the past weeks.

BRADFORD: Well, coach, it's not like we haven't talked back. Dominique said that Tim Tebow would be the fourth-best quarterback in the Big XII.

STOOPS: Dominique, my son, is this true? 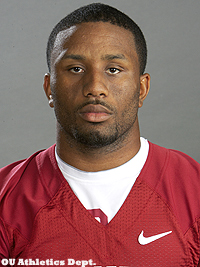 DOMINIQUE FRANKS: My comments were taken out of context.

STOOPS: Then what did you really mean to say?

FRANKS: I meant to say that I hope Tim Tebow dies in a fire.

STOOPS: So, I know we've been DISRESPECTED lately, but...well...

STOOPS: Well...I think the Tebow disrespect goes even deeper than ever imagined.

STOOPS: Tim Tebow, as you know, is a Christian. He's always talking about God and Jesus and the whole crew, but what he's not telling you is...is...

STOOPS: ...(deep sigh)...is that he started the conflict in the Middle East.

BRADFORD: (incredulous) You've got to be kidding me.

ALEXANDER: And OU is IN THE WORLD!

BRADFORD: Coach, I know for a fact that not a single thing you just said is even close to true.

STOOPS: Yeah right, Sam. Trying to stick up for your Heisman buddy, huh? Well I double-checked all of this stuff on Wikipedia. See? 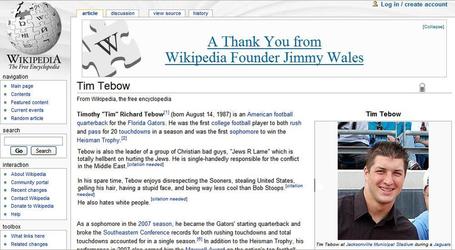 You're playing for Planet Earth.

ALL, EXCEPT BRADFORD: YEAH!

STOOPS: Now, let's bring it in for a prayer! My pastor is here to lead it. 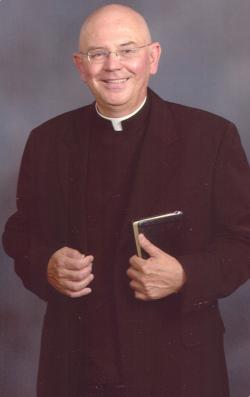 /all kneel and bow their heads

BRADFORD: Coach, I thought you said you were Jewish.

STOOPS (throwing away yarmulke): Huh? Yeah, whatever. Hit it, Father.

PRIEST: Dear Heavenly Father, we thank you for this day...

PRIEST: We thank you for the opportunity to play this great game of football. We ask that you keep all the players safe...

PRIEST: Well, no, we want to keep everyone safe. They're all God's children.

ALEXANDER: ...ARE YOU DISRESPECTING ME, COLLAR?

PRIEST: Oh goodness, no. I just think we should all love each other is all.

STOOPS (looking the other way, just like he did with Rhett Bomar): Huh? Well, you can't say he didn't deserve it. 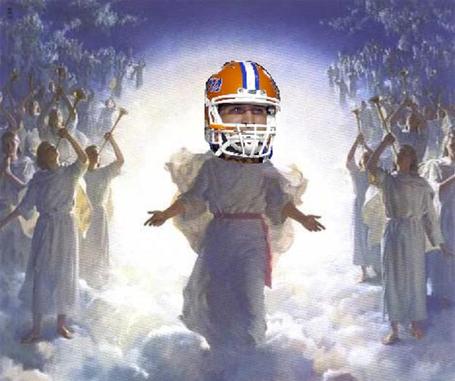 STOOPS: Wh...wh...what are you doing in our locker room? Nobody should have allow...

TEBOW: (back to booming voice) YOU HAVE SLANDERED ME FOR THE LAST TIME, STOOPS! NOW, IT'S TIME FOR YOU TO PAY!

STOOPS: NO! (drops to knees) PLEASE! HAVE MERCY!

STOOPS: WHAT ARE YOU TALKING ABOUT?!? IT LOOKS LIKE I PEED MYSELF!

BRADFORD: That was pretty funny, Tim.

BRADFORD: (addressing the team) Guys...we're a great team. In fact, we might be the best team in the country. Tonight, we've got a chance to prove that. We don't have to resort to absurd Middle East conflict conspiracy theories or poorly Photoshopped pictures of Tim stealing entire states to get us fired up.

BRADFORD: (to Tebow) Long story. (to team) Guys, all we have to do is play our hardest. We're representing a great university, great fans, a great state, and a great conference. We don't need to feel disrespected to play our best; it's in our hearts.

TEBOW: (to team) And on behalf of the Florida Gators, I can tell you that we do respect you. It's the champions of the two best conferences in the nation playing each other tonight. There's a lot of mutual respect there, I think.

TEBOW: No, silly! Why would I hate white people? That doesn't even make sense.

BRADFORD: That's what I've been telling him!

STOOPS (exiting bathroom, still with crotch stain): Wow...I can't believe I've been so blind. Tim and Sam are right, men. There's no need to constantly play the disrespect card. We just have to play our game. (to Tebow) Tim...I owe you an apology.

BRADFORD: I'm really glad we got all that settled. That was getting a little ridiculous.

TEBOW (from the doorway): Oh, and guys?

/all turn to Tebow

TEBOW: ...(holds up a pair of middle fingers) S-E-C speed, bitches. Suck on it. God bless!

/begins smashing everything, and everyone, in sight

TRENT RATTERREE: This makes me angrier than the time Locks of Love wouldn't accept my donation!

GRESHAM (poking his head in from the hallway): Can I come back in yet? 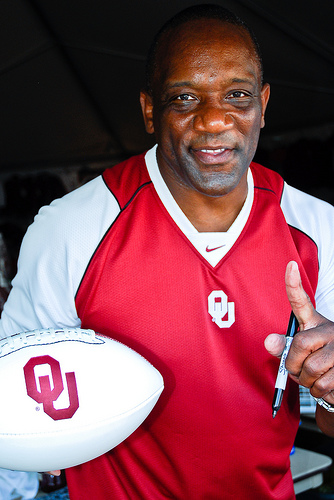 BRADFORD: Can I just declare for the draft right now?

Who is your favorite character in the Sooner Disrespect Chronicles?