Anatomy of "No Gain" -- Missouri's running game against Nebraska

Share All sharing options for: Anatomy of "No Gain" -- Missouri's running game against Nebraska

People asking what's wrong with the Missouri running game right now are a dime a dozen. People with answers to that question are far more rare. The analysis that follows is in no way a complete diagnosis of what ails the Missouri rushing attack. Instead, it takes a look at one isolated play in which what looks like a potential big gain is quickly rendered into no gain. 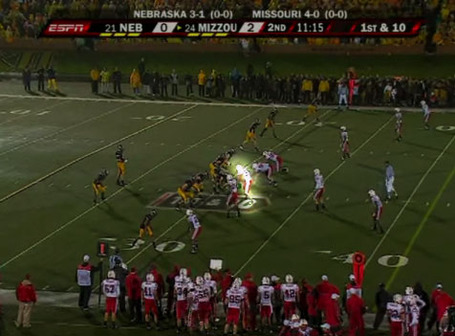 Missouri comes out in a 3x1 Trips Left formation with the back (Derrick Washington) to the weakside. The play call appears to be a counter play to Washington, who approaches as if it is a sweep to the left before quickly planting and moving right. Highlighted here is Ndamukong Suh, who appears to be in a two-technique over the right guard (Kurtis Gregory).

Before we go any further, let's address the playcall (or more importantly for Missouri fans, the play direction). Not since Lewis and Clark came through in the early 1800s have people in Missouri been so worked up about North/South vs. East/West. While the shotgun counter (explained in depth in the middle of the page at this link) is nowhere near the North/South equivalent of say, a halfback lead from an I-formation jumbo set, it is far more North/South than most people are giving it credit for. Just because Washington begins the play moving laterally doesn't mean the play isn't designed to go vertically. The point here is for the pull block and Washington's misdirection to create a lane on the playside. Yes, when executed correctly, it is very much a North/South run. 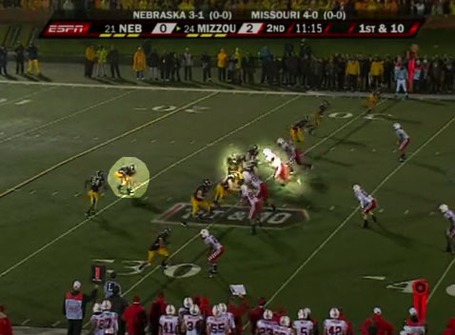 There's a little bit of trouble from the start, as the snap is low to Blaine Gabbert, who has to bend down to snag it, putting a small hitch in the timing. The other immediate observation to be made is what happens at the defensive tackle spot opposite Suh. Highlighted here is DT Jared Crick, who will shoot the gap thanks to the pulling action of left guard Austin Wuebbels. Here, you can already see Wuebbels preparing to pull into the B-gap on the right side. That leaves left tackle Elvis Fisher alone to chip Crick and then return to his assignment on the defensive end. Center Tim Barnes has to scramble back to push Crick out of the play from behind. 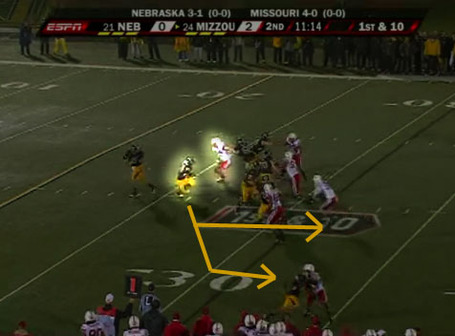 Here we see Crick way upfield with Barnes trailing behind. With this being a counter play, Crick's presence isn't incredibly disruptive, as the run is designed to suck defenders to Missouri's left and then hope the overpursuit opens up the right side. The dearth of defenders in the box and Missouri's numbers advantage make it appear like Washington will have lanes both inside and outside once he reaches the line of scrimmage. 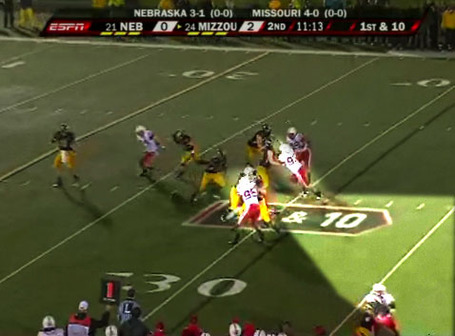 It looks like Gregory has tied up Suh, right tackle Dan Hoch has tied up Pierre Allen, and Wuebbels is out in front to lead for Washington. The second level looks relatively barren, and things are looking promising. Right? 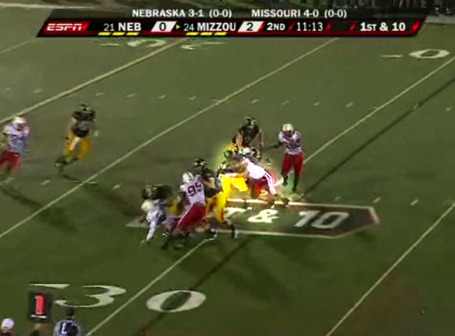 Wrong. Suh fights off an overpowered Gregory, who gets caught leaning a little bit. Just like that, a promising opening for Washington results in minimal gain. 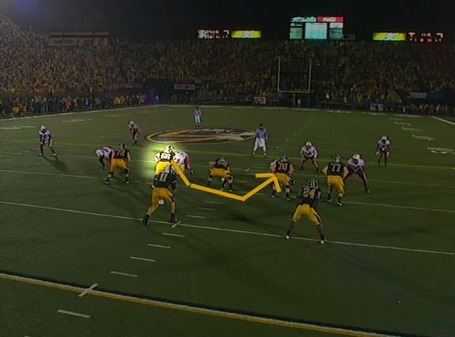 Here we see it from SkyCam. Crick is shaded in a three-technique over Wuebbels, who will be pulling right. The responsibility then gets put on Fisher to chip Crick, buying Barnes time to pick him up. This is all fine and dandy, except for the fact that it leaves Gregory one-on-one with the best defensive tackle in the country. 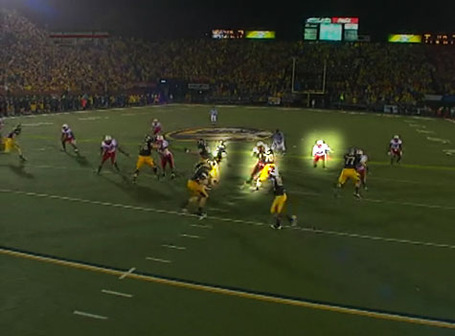 Wuebbels begins the pull, Fisher gets his chip and Gregory appears to have turned Suh in the proper direction. If your linemen have their butts facing the hole, odds are that they're doing their job. Here we see the linebacker (presumably Will Compton??), stepping up to fill in the gap. 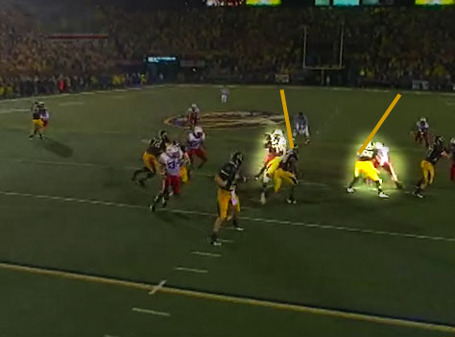 Wuebbels engages the backer effectively, and the hole appears to open for Washington. Looking downfield, it looks like that if Washington can get past the line of scrimmage, he should ideally only have to deal with the safety in the top right corner of the frame en route to a substantial gain. The only problem? Highlighted on the left side is the Suh/Gregory battle, where Suh reads the play and begins to get a beat on Gregory with that right-arm swim move. 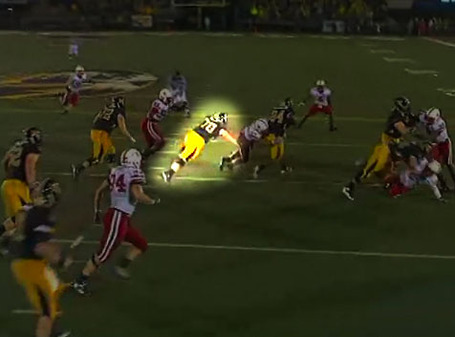 Suh latches onto Washington as Gregory dives to try to get a hand on Suh, but it's too little, too late. Washington doesn't even get the chance to make safety Larry Asante miss at the second level, and Missouri is again stuck in second and long with a hobbled quarterback in the midst of a monsoon.

The Takeaway: Screw the "Power of Red," you can rename this play the "Power of Suh." In the play's early development, Nebraska's pass-heavy defensive look and the movement of Missouri's offensive line makes it look like an easy gain. But on this single play, one lost battle in a one-on-one matchup was the difference between 5+ yards and zero yards. These were the kinds of battles that Missouri won consistently in 2007 in run-powered wins over Texas Tech and Arkansas. The players are saying that the failure of the running game is all about "the little things," and on this play, they're absolutely correct.