Anatomy of a Deflating Start: A look at Texas' first drive against Missouri

Share All sharing options for: Anatomy of a Deflating Start: A look at Texas' first drive against Missouri

Is it safe to say that quite a bit went wrong in Missouri's 41-7 loss to Texas? It all started on the first drive of the game by Texas, which appeared to come far too easy. When Cody Johnson wasn't pounding away on the ground, Texas put the ball in the air three times, taking advantage of the Missouri pass defense. Did Missouri's defensive scheme open the doors to Texas' offensive revival? Here's a look at the three passing plays and what they might say in response: 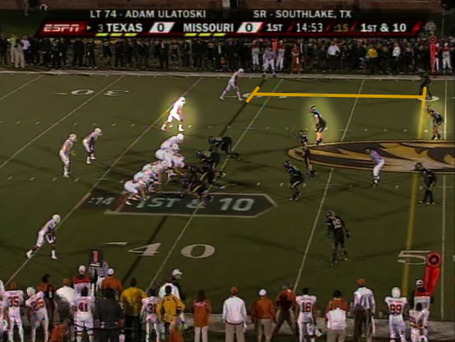 Here, we see the first play from scrimmage, which will be indicative of most of the evening. Texas comes out in the Gun with the strongside to its left. Texas begins the game with 11 personnel (1 TE, 1 RB). McCoy has Foswhitt Whittaker to his left in the backfield, Malcolm Williams split wide to the left and Jordan Shipley in the slot. Missouri is in its base 4-3. There are two things of note as the players line up that are constant themes for the evening:

1. Shipley is highlighted in the slot, but across from him are Andrew Gachkar and Kenji Jackson. Jackson is 10+ yards removed from Shipley, and Gachkar is going to be hard pressed to close out on any outside routes because of his responsibilities in the running game.

2. When we heard Missouri was going to go a soft zone, I wasn't sure it would be THIS soft. The corner (Kevin Rutland?) is ten yards off the line of scrimmage. If this is a Cover 3, that makes a lot of sense. But if it's man coverage, then it's pretty clear that Dave Steckel REALLY doesn't trust his corners to not get beat deep. 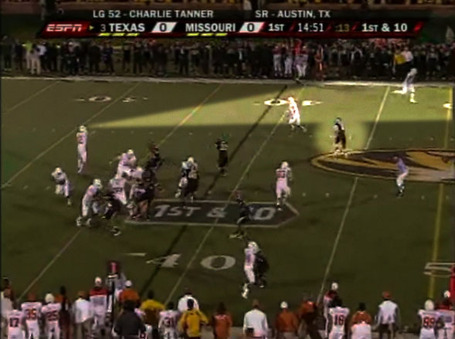 A playaction by McCoy causes Gachkar to take one step to his left before having to recover and sprint to his right. At the top of the screen, Williams runs off the cornerback and opens up the flats for Shipley. Even before the snap, McCoy knows he's going to Shipley. The distance between Shipley and a linebacker, even one as good in pursuit as Gachkar, is too much of an advantage to pass up. If nothing else, he knows he's going left, as he can always audible into a screen for Williams. 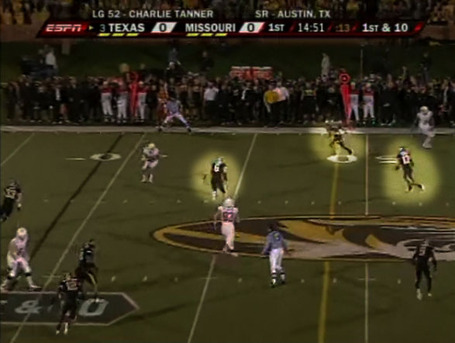 Shipley makes the catch 2-3 yards past the line of scrimmage. The game is nine seconds old and, already, we have a test of Steckel's philosophy. If you're going to play a bend-but-don't-break soft zone and preach pursuit and tackling, you better pursue and tackle. Missouri has three players in position to minimize the gain, with Gachkar, Jackson, and the corner all stepping up. Also, on the left side of the photo, you see Lambert reengaging from behind the line of scrimmage. 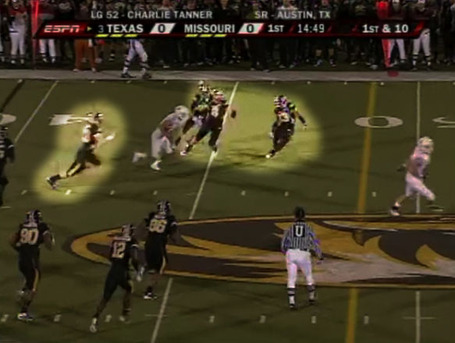 With one plant of the foot, Shipley cuts inside and Gachkar flies right by him like he's a MIG from Top Gun. Now, all three of the primary pursuers are both outside of Shipley and not in the best position to angle him into other defenders. Lambert flies back into the screen, and sadly for Missouri, becomes the Tigers' best hope at preventing the first down. 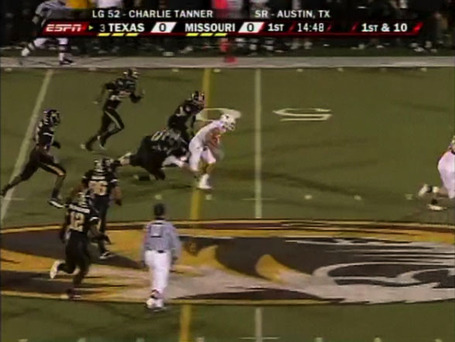 Lambert dives and misses, taking out Jackson in the process and springing Shipley to the second level. Shipley rumbles for another 21 unpictured yards and the Horns have the ball at the MU 30.

EXAMINED PLAY NO. 2: 12:55 remaining in 1st Quarter; 1st and 10: Colt McCoy pass complete to Malcolm Williams for 7 yards, fumbled, recovered by Texas at the MU 13, out-of-bounds. 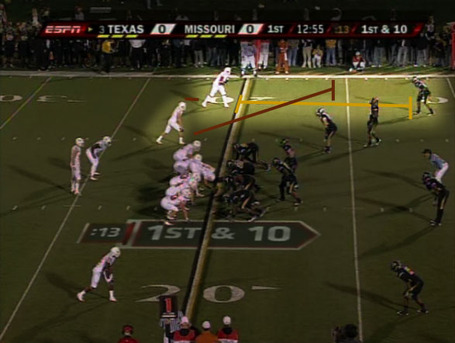 Texas comes out again with 11 personnel with the same formation and same look as it did in the play above. Again, Williams is uncontested by a distance of 10 yards (indicated by the gold overlay) at the line of scrimmage by the Missouri cornerback. Will Ebner and Sean Weatherspoon have stepped up closer to the line of scrimmage, with Gachkar playing at normal depth. Kenji Jackson steps up behind Gachkar, perhaps tipping off that A) Gachkar is bringing the blitz, B) Jackson is eyeing Shipley, or C) Both. In this case, it's option C.

For an offense, everything about this defensive look just BEGS for a screen or quick throw to the strong side. With that kind of cushion, you're basically daring the defense to play pitch and catch on every play and have the receiver run straight forward for a free 4-5 yards. The open slot and the deep corner means its an easy call and an easy read for the Texas offense. (All of the reasoning used here is exactly why Terrelle Pryor and Jim Tressel got absolutely REAMED after the loss to USC.) 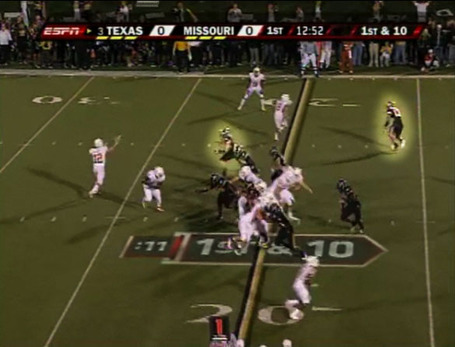 Williams steps back behind the line of scrimmage as Shipley runs out of the slot to challenge the deep corner (not pictured). Highlighted on the left is Gachkar, who does indeed come on the blitz, which vacates the strongside of the field when he is unable to reach McCoy in time. The other highlight is Jackson, who will be left free, surprisingly, by Shipley. 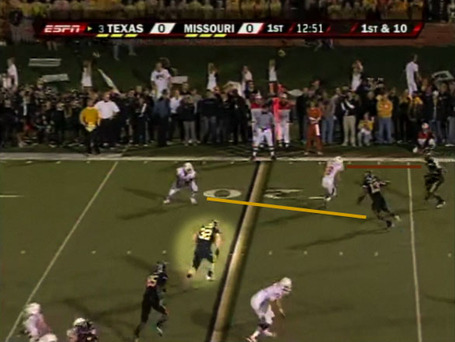 Despite the quick throw, Missouri doesn't appear to be in horrible position. Shipley bypasses Jackson to go after the corner, perhaps trying to seal him off to free Williams down the sideline. Ebner hustles back from being upfield near the line of scrimmage to try to force Williams back out. Now it's a race to a spot. How far upfield can Williams get before he runs into Jackson and/or a wall of other defenders? 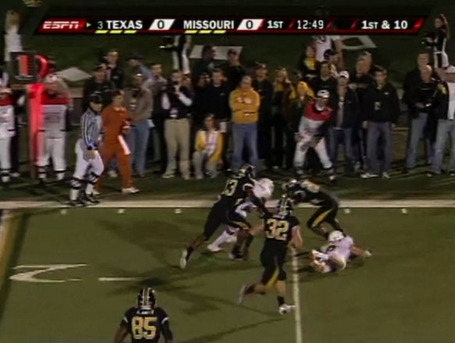 The answer is about 4-5 yards, as he's contacted by Jackson and Rutland as Shipley fails to hold his block. Williams eventually fights forward for another 2-3 yards. Again, I stress that by playing the secondary so deep, the Tigers dared the Horns to take those free yards. 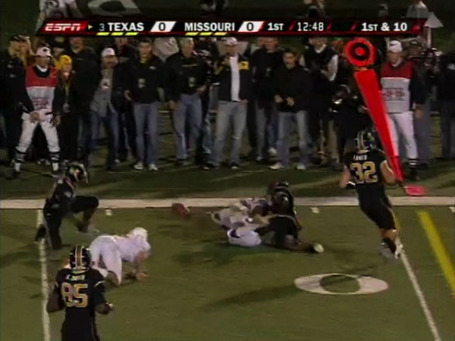 Just to rub salt in the wound, Williams fumbles, only to have it go out of bounds. There's nothing to say here other than it'd be nice to have some bounces go Missouri's way one of these days against one of the "big boys" in the Big 12. With Williams' seven-yard reception here, the Longhorns have now gained 38 yards on passes that traveled a net of one yard downfield (3 yards downfield to Shipley, 2 yards behind the LOS to Williams).

EXAMINED PLAY NO. 3: Colt McCoy pass complete to Jordan Shipley for 8 yards for a TOUCHDOWN. 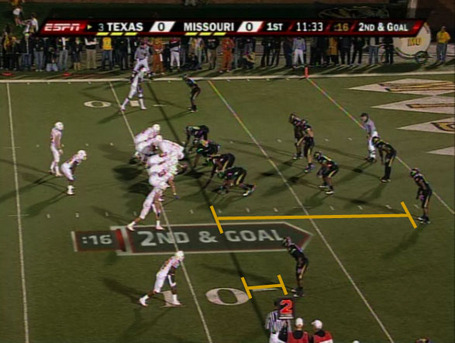 Once again, Texas comes out in the 11 Gun, this time with the strongside to the right, with the back on McCoy's right and Shipley in the right slot. In a nice change of pace, Missouri actually puts its corners near the line of scrimmage to contest the wideouts, especially now that Missouri has an extra defender in the form of the endline. Shipley remains largely uncontested at the LOS with Jasper Simmons nine yards away. 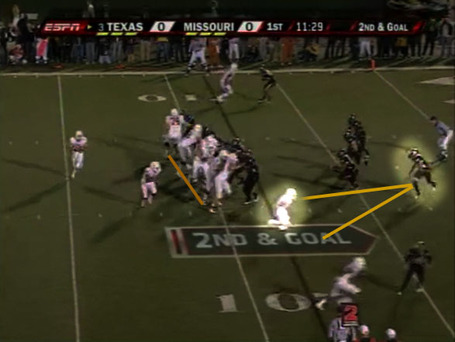 The line helps facilitate McCoy's roll to the right by turning the Mizzou D-Line. The wideout at the bottom of the screen runs off the cornerback to free up the sideline for Shipley. Highlighted is Simmons, who has an absolute no-win of a situation developing. Without knowing the details of the play call, Simmons appears responsible not only for Shipley flaring out, but also the back coming out of the backfield if he comes available for a pass. You can make the case that Shipley was the bigger threat and therefore should have earned Simmons' attention, but either way, he's going to be in some trouble. 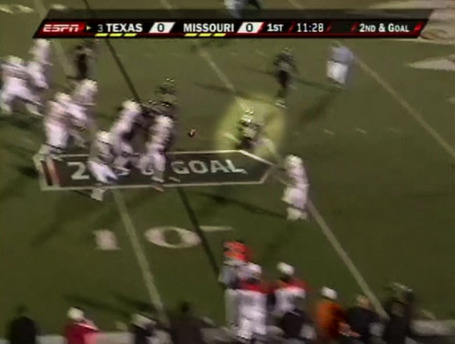 By taking one step upfield toward the back, Simmons frees up the easy pass to Shipley. Simmons is out of position simply by circumstance, and is left hoping that the corner can help him out. 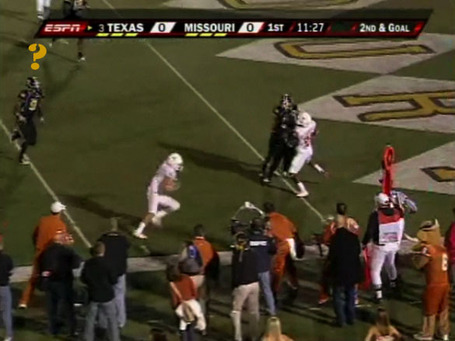 No dice. The corner is sealed, and Shipley struts in. Simmons is left asking, "What the hell was I supposed to do?" 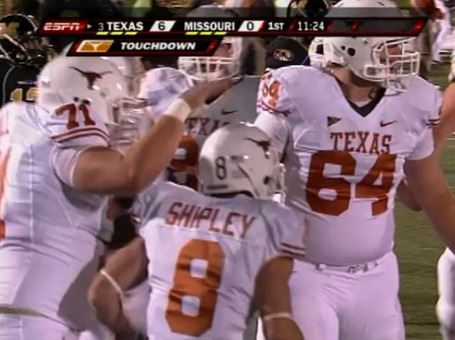 The Takeaway: Dave Steckel took over defensive coordinator duties hoping to simplify the defense and minimize the potential for the back-breaking long plays that were on loop in 2008. On this drive, Missouri looks incredibly paranoid about the athletes in the Texas receiving corps beating the Tiger secondary deep. All week, we'd heard that frustrating Texas was a matter of doing exactly what Missouri had tried to do all year -- sit deep, force short throws, hustle to the ball and tackle well. We'd also heard that Missouri felt comfortable enough with its base 4-3 to leave its backers in the slot instead of opting for another defensive back, even if it meant a favorable matchup for Jordan Shipley.

But before we try to make grandiose statements about this first drive, I should reiterate: These are isolated incidents on selected plays. Furthermore, it's not hard to come to the conclusion that Texas was the physically superior team. I still need to go through the rest of the game and see how/if Mizzou adjusted, but if Missouri is systemically opening itself to surrendering a minimum 5-6 yards a play with a simple audible or check down, that could certainly cause some issues down the stretch.

All in all, trust in Dave Steckel. Somewhere in between ATTACK ATTACK ATTACK and Bend But Don't Break is a happy medium. I sure as hell don't know where it is, and here's to hoping true football minds (which I'm certainly not) get it figured out for the next five games.