We interrupt our regularly scheduled football posting to remind you that, yes, in fact, Missouri basketball IS back. As part of our ongoing preview series this week, we now take a look at all of the members on Missouri's roster. Today, UribeAuction and I (RPT) share our thoughts on the backcourt. 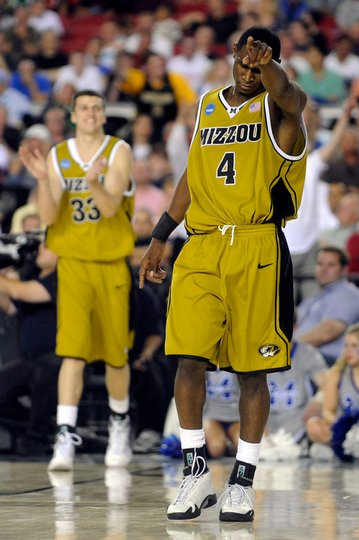 UribeAuction: Obviously, any conversation surrounding Tiller will start and end with defense. If Gary Payton was "The Glove," then Tiller is that homemade mitten your grandmother gave you that makes you feel really uncomfortable when it's on you. He'll create points off turnovers and go off for 18+ points a handful of times this year, as usual.
RPT: One year ago, we wondered if he'd learn to harness his own speed and learn to play within himself. That question was answered pretty emphatically on defense and was on its way to being answered offensively during the NCAA Tournament. I wonder a little bit about what to think of Tiller now that he's being counted on offensively, rather than being part of the "just gravy" crowd. We'll see pretty quickly how that repaired wrist holds up. The guy remains an absolute force on defense, though, and should once again be in the conversation for Big 12 Defensive Player of the Year. 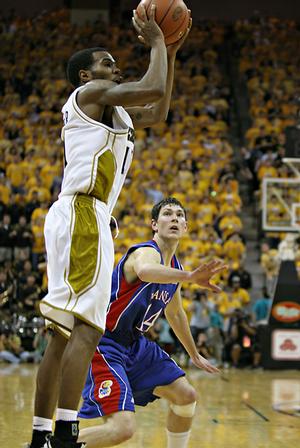 UribeAuction: Taylor's one of those guys who may not show up on the stat sheet but still has a huge impact on the game. If he only scores five or six points, it doesn't mean he had a bad game-it just means he chose to distribute the ball amongst his teammates instead of taking shots. When he does take shots, though, he can be a good scorer-but he only seems to do that whenever the team needs it.

RPT: Is clutch measurable? (STOP GOOGLING, URIBE AND BILL. I WAS JUST JOKING. PUT AWAY YOUR CALCULATORS AND EXCEL SPREADSHEETS). Zaire was just so freakin' clutch last year that I have to begin to wonder if karma swings around and sack taps Mizzou this season on a last second shot from Taylor. He continues to be one of the more underappreciated defenders in the Big 12, but I really think we'll see the growth in his offensive game continue this year. Last year, it took ribbing from DeMarre Carroll and Matt Lawrence to force him to open up offensively. He did so in the Big 12 Tournament, and I get the impression he's ready to do so for a full season this year. 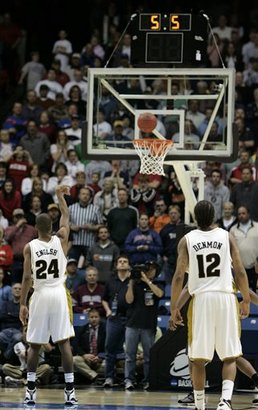 UribeAuction: When Kimmie's on, he can carry this team with his scoring. But, like any shooter, he's not always going to be feeling it from the outside. CMA might get on his case for taking some poor shots, but for Kimmie, the good hopefully will outweigh the bad. Plus, he's Kimmie. It's next to impossible to dislike the guy, whether he goes 2-10 or 7-10 from the floor.

RPT: Remember when Marcus Denmon was supposed to be Clarence Gilbert? Because I'm definitely getting those vibes from Kimmie now. Like we've discussed, he has a look this year like he's ready to put the ball up from ANYWHERE. I continue to love him spotting up, although I have mild concerns about his ability to blow by defenders on the drive and/or create his own shot. 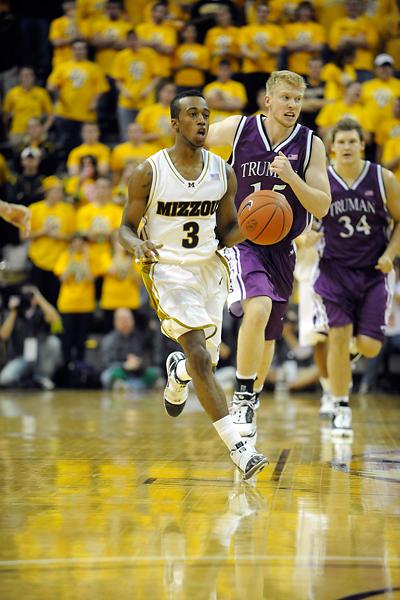 UribeAuction: I like what I've seen from Paul in the B&G game and Truman State exhibition. He looks far more confident handling the ball than he did last year and he (so far) hasn't taken as many ill-advised shots. If he can continue to drive to the hoop against real competition, I like Missouri's chances when he comes off the bench for Tiller.

RPT: I'll say this much - he doesn't look lost anymore, and considering how he looked at times last season, that's a huge compliment. He's got J.T. Tiller syndrome: he plays far faster in his mind than his body can physically handle. I know he's starting to get his fair share of love and I'm thrilled to see his development, but if the debate becomes Paul v. Dixon, give me Dixon.

UribeAuction: I'm not sure what to make of Denmon in terms of scoring. I love his defense, but Denmon either can lay an egg offensively or go for double-digts without warning. He's working into that Zaire Taylor role, though-he's not a central part of the offense, but if you need him to score, he can.

RPT: I still feel burnt by Denmon from last year. I drank gallons and gallons of the MD kool-aid after the black and gold game last year, even floating out the possibility that he could lead the team in scoring if things broke right. I realize that he played most of the season hurt, but his struggles seemed just as much mental as physical. I get the feeling that once he has a hot-shooting 18-24 point game at some point, develops confidence and gets that taste of success, he'll REALLY take off. Here's to hoping that happens sooner rather than later, because he could be a dynamite sixth man. 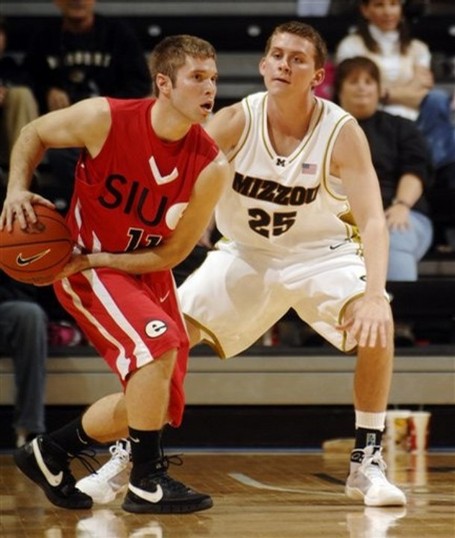 UribeAuction: Even if it's only for a year, good for Sutton for getting a scholarship. It's always fun when he comes into games, because you know his teammates are going to try to get him the ball to get a rise out of the crowd.

RPT: Good for him, indeed. Now the band can stop crying for Sutton every two minutes. I love the "let's get the walk-on a wide open three!" meme as much as everyone else, but I wonder if Sutton will ever be more than that. As for his scholarship, congrats bud, but if both Tony Mitchell AND (by some long shot) Bradley Beal decide they want to be Tigers... Yeah, in that case, we're going to need to trade you this lovely fruit basket for that full ride. I love you Sutton, but, come on. 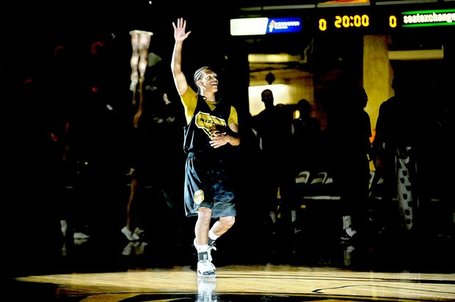 UribeAuction: Like the Energizer Bunny, Dixon just keeps going and going and going and going. I can't recall him ever slowing down while on the court against Truman State. If CMA puts him in at the end of the first half against a tired team that just wants to get to the locker room, he'll put up six, eight, ten points in a heartbeat. Of the three freshmen, I've been the most impressed with Dixon-that's not a slight at the other two, more a statement on just how good I think Dixon has looked so far.

RPT: Mancrush engage. He plays faster than Tiller, and he rarely seems as out of control (five-foul first half in the Black and Gold game notwithstanding). Zaire calls him a "freak athlete," and if you've seen him run the floor, you know why. I don't know exactly what to expect from him this season, but I'm sure as hell expecting something.