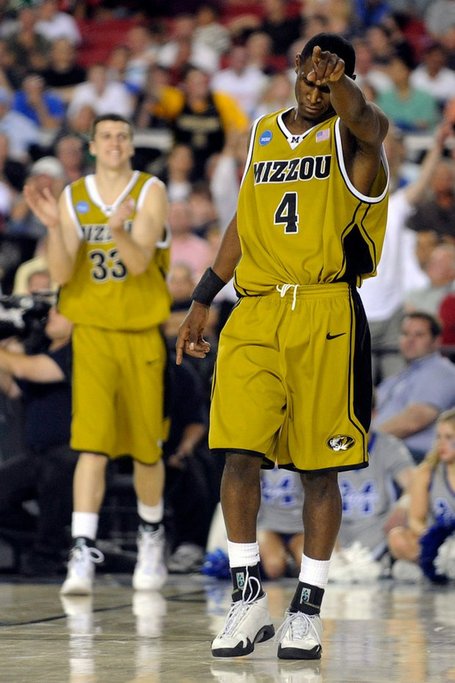 In the late 18th Century, a French gunsmith named Honoré Blanc appeared before a committee of scientists and demonstrated that a functional musket could be assembled by randomly selecting fabricated parts from various piles. While fellow Europeans were dismissive, Thomas Jefferson, American Ambassador to France, was enthralled with Blanc's manufacturing advance, and carried the concept across the Atlantic, where it was adopted by Eli Whitney, who spread the gospel of interchangeable parts stateside, thus hastening the arrival of the industrial revolution.

As J.T. Tiller begins his senior season, we reach a milestone, a culmination of the new generation. This season, for the first time, every second of every game will be played by athletes who have known no coach but Mike Anderson. By reviving the program and remaking the roster, Mike Anderson now owns Missouri basketball.

All of the players recruited by the previous regime are gone. And though Mizzou will hardly be better off without Leo Lyons and Matt Lawrence, they were molded to fit the program, not manufactured for it. For the first time, every man on the squad was hand-selected by Mike Anderson not for what they are - guard, forward, center - but what they do - defend, disrupt, demoralize. Anderson no longer has a lineup, he has an assembly line.

Plug them in. Swap them out. Fire up the machine.

Anderson has already changed the program by changing the axis. A vertical game played at the rim is now a horizontal game played on the run. And this season, the industrious evolution continues beyond mere basketball. Anderson won't make substitutions. He'll change lines - Tiller, Taylor and English hit the bench while Denmon, Dixon and Paul hop the boards. Welcome to Hockey Night in Columbia. He won't take time outs. He'll take on fuel and tires. Welcome to the Hardwood 400.

Change the parts, change the game.

What a difference a year makes. Twelve months ago, I wrote that Mizzou hoops had lost its connection with the fans, that it had been completely eclipsed by football, and that it was time to believe again. But last season's Tigers embodied the hoariest Missouri cliché. They were a Show-Me team. They showed everyone through their tenacity, through their triumph, and through their embrace of the fans who embraced them back. Last November, if I had asked which of Missouri's big revenue programs inspired the most faith in you, I know what the answer would have been. And if I asked the same question now, I'll wager the answer might be different.

Recently, Mike DeArmond wrote of how Fight Night at the Athena became the portal from past to future. It's when the bad blood was washed away and the true Tigers stood up. Since that moment, what defines Mike Anderson basketball has come into sharp relief: effort, heart, commitment. These Tigers know how to play, and they love to play. And there's nothing a Missouri crowd loves more.

What happened last year, wasn't just magical, it was methodical. It was a process that peaked earlier than expected. It was also more than that. I'm not much for supernatural explanations for athletic success. Carolina and Kansas don't win because of want-to or momentum or chemistry. They win because they have bigger, better, more skilled players, and coaches who orchestrate success. But watching Missouri's paranormal run through the NCAA Tournament last year led me to believe in the unseen. As the Tigers dissected one of the field's favorites in the sweet sixteen, it struck me that John Calipari probably wouldn't have recruited a single player in a Mizzou uniform. It wasn't that they couldn't play the game, it was that they didn't look the part. Their merits couldn't be measured by a tape or a scale. J.T. Tiller wasn't born to play guard, he was born to play hard. Every player on that team internalized the things that Tiller and Mike Anderson and DeMarre Carroll were and are all about. The conditioning, the will, the dedication. And those things will carry over to this season and beyond. Kim English, Marcus Denmon, Justin Safford, Keith Ramsey - they all have it. The hunger to run one more mile, to shoot one more shot, to dive for one more loose ball, their own internal combustion engines. They might look different, but they're all the same. Cut them open, it's plain to see.

These Tigers have interchangeable hearts.