The other day, I walked through a Barnes & Noble and sat down in one of those big comfortable chairs. I’m not sure why they put those there; I’m a lot less likely to buy a book if I can sit down and read all The Far Side comics in it at the store, know what I’m saying?

Anyways, I happened to pick up a book on spirituality, namely shamanism. I leafed through this book and read all about animal spirits. Apparently, shamans believed that every person had a spirit animal, an animal spirit that lives inside each person adding to their power and acting as sort of a guardian angel. Basically, you get the wisdom of that animal, as well as some of its attributes.

I found all of this fascinating. I especially found it fascinating when I made this story up thirty seconds ago.

These are your 2009-10 Missouri Tigers Basketball Spirit Animals.

Laurence Bowers is the Sugar Glider

Sure, the sugar glider looks cute. In fact, you might even want to pet him and say, "Aww, he’s just a little guy!" But he has a secret explosiveness to him that most people don’t anticipate. He can go from a crouching position to soaring through the air quicker than you can blink. And you know what? If you don’t know he’s coming, he’s kind of scary. And awesome.

Marcus Denmon is the Roly Poly

It’s easy to forget the little roly poly sometimes, mainly because he doesn’t really do a whole heck of a lot. When intense situations tend to arise, he has the unfortunate instinct to curl up in a ball and just try to survive it. Every once in a while…a….roly….poly…can…hit…a…¾….court…shot? Let’s just move on.

Mike Dixon, Jr. is the Cheetah 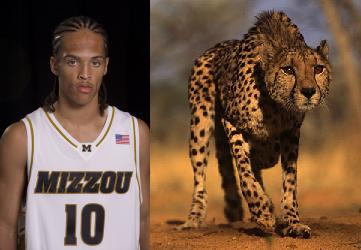 Kim English is the Jackal

Undersized and often overlooked, the jackal is not to be messed with. He is a merciless killer who is happy to hunt on his own and scavenge others’ work. He’s quick with his work: before you know it, you’re dead. Like, dead dead. D-E-D dead. He normally works alone, but occasionally assembles a small pack, to help with his ruthless murder. Always alert, the jackal can be called on to finish something whenever. And when he‘s locked in, he doesn‘t miss.

Steve Moore is the Warthog

A bruising battler, the most admirable trait of a warthog is its ability to mark its territory and hold its ground. And he’s got horns right by his mouth. I’d give my left pinky for horns by my mouth. Steve Moore probably wouldn’t, because he uses his hands to pay for college. But yeah, horns by the mouth and marking its territory. Something like that.

Miguel Paul is the Moth

Another creature defined my constant movement, the moth is a strange thing. When it’s got direction -- like when it’s flying toward the light -- it’s focused and efficient in getting there. But a lot of the time, it just flutters around like it has no idea what in the world it’s doing. But FLUTTER FLUTTER FLUTTER.

Keith Ramsey is the Giraffe

Tall but surprisingly agile, the giraffe is not one to be pushed around. Did you know that giraffes swing their necks at other giraffes to defend themselves? It’s true! YouTube it!

Justin Safford is the Bumblebee

Ah, the regal bumblebee. It’s always hard at work, doing all the little things that most people never notice. See that flower over there? Pollinated by a bumblebee. See that nectar that those other bees are drinking? Fetched by the bumblebee. See that compact car turning into a robot? Bumblebee. You’re welcome, you ignorant sluts.

Tyler Stone is the Fossa

Jarrett Sutton is the Dingo

Everyone likes the dingo because nobody’s ever gets to see the dingo. But if they did see a ding, they’d discover that the dingo is a bloodthirsty vicious killer who will kill your mother without blinking. Then, it will roll over and ask for a belly rub. I feel very good about this comparison.

Zaire Taylor is the Hyena

J.T. Tiller is the Dung Beetle 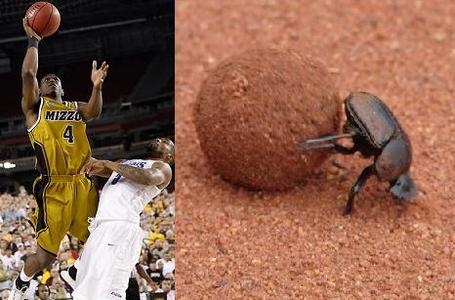 The dung beetle is not sexy. Like, at all. While hyenas are cute, jackals are remorseless killers, dingos are loveable but HOLY CRAP KEEP IT AWAY FROM ME, dung beetles are workmanlike and sort of disgusting. They do some of the least sexy work in the animal kingdom. They just roll poop. Over and over. Rolling poop, rolling poop, rolling poop. But you know what? The dung beetle is really, really good at rolling poop. So good that you say, "Wow, I can’t believe how good he is at rolling poop. It’s not fun, but it’s important, and wow, he’s really good at it." So I say, keep rolling, poop roller. I notice you, even if you do all the stuff that won’t get you on Animal Poop SportsCenter.

John Underwood is the Electric Eel

A very skinny member of the animal kingdom, he hangs out in the darkest nether regions of the ocean. But if given the chance…he could SHOCK you!