Mizzou-Iowa State: Beyond the Box Score

Share All sharing options for: Mizzou-Iowa State: Beyond the Box Score 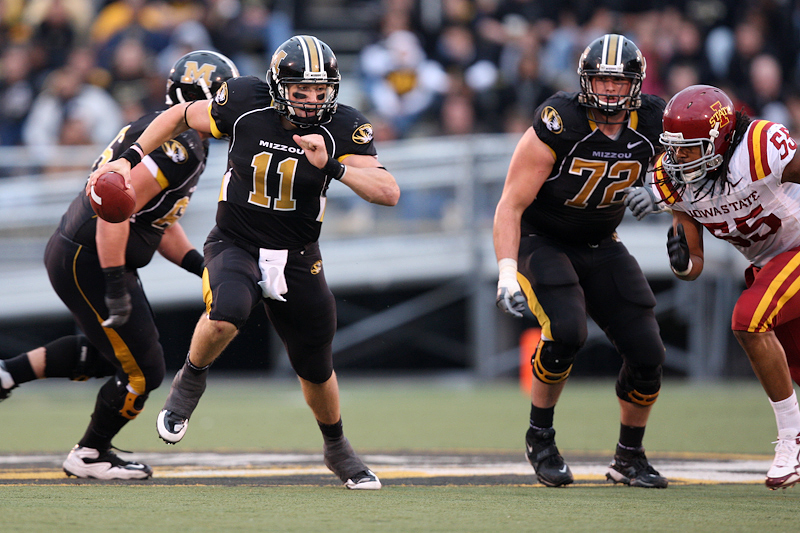 Be sure to check out the Healthy Blaine vs Gimpy Blaine comparison after the jump.

Just a simply insane difference, even in the rushing stats.

But there's an obvious disclaimer here: Mizzou faced the Nebraska and Texas defenses while injured, and his stats wouldn't have been as good in those games even if healthy.  So the question for today is, what would he have produced against Nebraska, Oklahoma State and Texas if healthy?

Thanks to the "+" measures, we can create a pretty good estimate.  To do so, we're going to look at one specific measure: Passing PPP+, or EqPts per Pass.  As you know, EqPts create an estimated point value for every play (and the "+" is the schedule adjustment), so if we can determine what Mizzou's PPP+ was for Healthy Blaine and Injured Blaine, we can estimate what Missouri may have produced if Injured Blaine never happened. (And we're keeping rushing stats out of the equation to keep things simple.)

So even taking opponent strength into account, Injured Blaine produced 62% of what Healthy Blaine produced, which is just a tremendous drop-off.  So if we take the Healthy Blaine PPP+ and apply it to the passes thrown by Injured Blaine, you get the following added production (assuming the exact same number of passes were thrown against NU/OSU/UT, which of course is a faulty premise, but it's what we've got):

vs Nebraska: +2.0 Passing EqPts (the rain was going to wipe out a good portion of the passing attack regardless)
vs Oklahoma State: +7.7 Passing EqPts
vs Texas: +2.6 Passing EqPts

That's an addition of 12.3 EqPts, or almost two touchdowns.  Who knows if the timing of those points would have changed the outcome of either the NU or OSU games, but that's not the point of this exercise.  Taking some super-rough estimates into account, here's a guess at what Gabbert might have produced in the 95 Injured Blaine passes if healthy:

Which means we'd be looking at a season line of this:

And this doesn't even take into account that he barely played in the second half of the Texas game.

Just as means of comparison...

Gabbert would be slightly better across the board.  You would expect him to have better yards per pass figures just because of his strong arm, but better completion, TD, and INT rates?  Yikes.

Now think about this: what would Danario Alexander's numbers look like right now with no Gimpy Blaine?  Of the 16 extra completions and 298 extra yards, he'd have probably snagged about 7 and 125 of them, giving him about 99 catches for 1,536 yards.  That would bump him from third to second in the country in receptions per game, and from third to first in the country in receiving yards per game.

(And he still wouldn't be a Biletnikoff finalist.)

Turnovers.  More than any other game, turnovers.

Missouri is actually somewhat due a turnover -- their last one was in the third quarter against Colorado, meaning they've gone nine quarters without a lost turnover.  Even the best teams in the world throw a pick or bobble a ball every now and then, so expect 1-2 from Mizzou tomorrow.  But if they stop it at 1-2, while maybe forcing 1-2 themselves, then ISU's odds of winning go down exponentially.  Turnovers are always important, but ISU lives and dies off of them.

Mizzou was +3 points in the turnover game, and they won by 10.  One more strip by Iowa State, and it could have turned the game.

Touchdowns instead of field goals.

If Mizzou is able to punch the ball into the endzone instead of settling for three points, an Iowa State offense that has been far from en fuego recently will find it quite difficult to score enough points to keep up.  But if Mizzou gets, say, three scoring opportunities in the first half and only comes away with 9 points instead of 17 or 21, look out.  Meanwhile, if they're holding ISU to field goals, ISU has no chance.  Red zone execution is ISU's only major defensive advantage, and it could be a big one.

Expect ISU to run plenty of short, quick passes, and expect them to work at least a bit considering Mizzou's typically soft coverage cushions.  It's annoying, but we saw last week why they do it.  If they tackle well and force an only-decent offense like Iowa State's to drive the length of the field consistently, the Cyclones will falter more often than not.

Consider this one a FAIL in Q1, a slight fail in Q2, a wash in Q3, and a WIN in Q4.  Like I said, Mizzou might not want to wait as long to really play the short passes well this Saturday, but in all this was still an overall net win for Mizzou.

Despite the fact that their own mistakes allowed for a little more adversity than you'd like to see (particularly the late-Q2 fumble and some first-half issues defending the short pass), you always like seeing your team overcome adversity, and for the second game in a row, Mizzou dominated the second half.  They sent Sean Weatherspoon and Danario Alexander out as winners, and their young players (particularly #11) continued to show significant growth.  One of the major goals for 2009 was just to not screw up our hopes for the future, and their late-game surges the last couple of weeks have assured that this goal was rather successful, no matter what happens from here on out (though it's obvious that optimism could be starkly diminished with a couple of losses to finish the season).  In all, it was a lovely Saturday to watch a Mizzou win, and like the Mizzou team did immediately after the game, we now turn the page and look to Kansas.