Another Thanksgiving Special with RPT

Share All sharing options for: Another Thanksgiving Special with RPT

It's unequivocally my favorite holiday of the year, and it's one where I'd like to take this opportunity to wish every single RMN reader a happy, healthy and prosperous Thanksgiving. In the spirit of giving thanks and in keeping with a tradition I started last year, here's a list of things I'm thankful for, dating back to last Thanksgiving.

... perspective after tryptophan lured the Missouri secondary to sleep at Arrowhead last year. That is what happened, right?

... a depressing Mizzou/Illinois Braggin' Rights game, if only because it gave us the unhaunted Lou Brown thread and the funniest picture ever posted in the Mizzou Links

... the chance to send off the senior class with a victory in San Antonio, meaning 30 wins in three years. Yes, I'll always remember the Alamo....... Bowl.

... Keith freakin' Ramsey down in Athens.

... the career of Jeremy Maclin and the tears that rolled down his face upon leaving Mizzou.

... the introduction of the RMN Wall of Excellence.

... being able to go back and laugh at the Mike Anderson vs. Doc Sadler hysteria.

... the state of Mizzou basketball.

... the much beleaguered Leo Lyons returning from his ticket-related benching to put in 30 as Mizzou pulled away from Baylor at home in front of the best non-Kansas crowd in Mizzou Arena history at that point.

... incredible tributes to Jeffrey Crawford, a close friend of many here at RMN.

... Sheldon Richardson putting on the Mizzou hat, even if he didn't qualify.

... Zaire dropping a shot at Flan Arena in Austin, giving Texan RMNers the chance to taste the tears of unfathomable sadness.

... the inaugural induction class into the RMN Wall of Excellence.

... the then almost-implausible realization that Mizzou controlled its Big 12 destiny in late February.

... statistical revenge on K-State. No longer was Mizzou the Hans Moleman to KSU's football.

... the chance to sit courtside at Allen Fieldhouse for one of the most incredible sporting atmospheres I've ever seen, even though we won't discuss the actual game.

... an incredible (and emotional) senior night for Mizzou basketball against Oklahoma to go undefeated at Mizzou Arena. Quoth Jeff Capel: "Not many people have (pause), hell, no one has come here and won."

... everything that led up to this, as well as the incredible time I had in Oklahoma City covering that team for three of the longest but most rewarding days of my life.

... Kim English and ONIONS against Marquette. That, and Buzz Williams still whining. Over the line, mark it zero.

... the best post Bill has ever written, leading into the Memphis game.

... the moment that perhaps gives Armageddon a run as the best moment in RMN's existence, Mizzou's win over Memphis in the Sweet Sixteen. Naturally, there's a GIF party, a podcast, and a Hello World stats piece. In a related note, DENMON, OH MY.

... realizing how long this post is without even finishing basketball season.

... the Thank You thread once the magic finally ended.

... one of the best Paint jobs of the year regarding the Meme Madness controversy.

... hosting The Closers with our boy Sleepy.

... a plea to redraw the Big 12 football schedules.

... the Black and Gold game for giving us Special Forces and General Mills.

... a Big 12 and NCAA Regional Championship for Mizzou softball.

... the return of ZouDave's videos.

... second place at the Big 12 Championship and yet another regional appearance for Mizzou baseball.

... finding out that we've got ourselves a quarterback.

... greatness, as told by Kim English.

... a pure football rivalry and a storm/power outages giving us one of the most surreal football atmospheres I've ever seen in my life, loss be damned.

... yet another fantastic year for Rock M Nation. Happy Thanksgiving. Enjoy the feast: 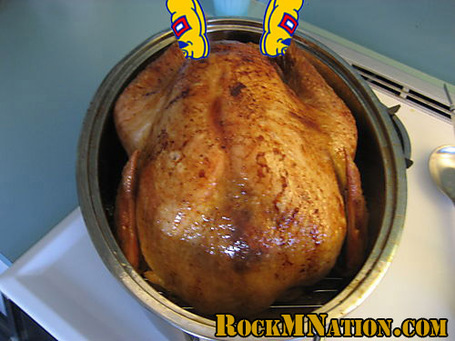