Targets and Catches (Part Two, a.k.a. Will Franklin's Redemption)

Share All sharing options for: Targets and Catches (Part Two, a.k.a. Will Franklin's Redemption)

Image via The Trib's G.J. McCarthy

As discussed yesterday, the concept of targets (catches + incomplete passes intended for a given receiver) versus catches is a pretty good one, despite the likely flaws in the ways target data is collected (dropped/tipped passes that become interceptions don't have target data attached, not every scorekeeper probably records targets the same way, etc.).  It allows us to look into a receiver's reliability in ways that simpler measures do not, and once national data is collected on this (offseason project #12,424), it might give us a way to measure a quarterback's performance independent of the quality of his receivers (hey Uribe Auction, here's how we get to Receiver Independent Passing Stats, or RIPS...I love it when a plan comes together).

But simply looking at a players Catch% (Catches per Target) does a disservice to those who are likely to run deeper, lower-percentage routes.  How about we do this as well: create a Yards Per Target measure.  Yards Per Catch is a good way to measure a receiver's explosiveness, and wouldn't the incorporation of target data create something that shows us both explosiveness and reliability?  Let's try that.

Below are tables for 2006-09 giving us the following information:

Here's where we start to see the value of Will Franklin.  The 'Copta had an awful catch rate this season, but as we see here, a) he made up for it with his explosiveness, and b) being a deep threat means you're probably seeing more low-percentage passes.  Meanwhile, tight ends running high-percentage routes will have good catch rates, but their Yards Per Target figures show that while it's good to have high-percentage targets, there isn't necessarily a lot of explosiveness there.

Two other interesting things to note:

1) Danario was very clearly showing his big-play potential early on.  It really is a damn shame that he ended up having to fight so many injuries, but on the bright side, if he hadn't, he'd have almost certainly gone pro last year.

2) Clearly we should have been passing to Earl Goldsmith more often.  Ahem.

Image via the inestimable Bill Carter

And here's where the numbers even out for Senor Goldsmith.

Even though his YPT dipped in 2007, Franklin was still a decent weapon here, averaging over 9.0 per target (which appears to be a pretty good number) and, as we must not forget, becoming one helluva downfield blocker for Maclin.  In all, Chase Coffman was the most reliable target this season, but obviously the WRs were more dangerous, even though they didn't really thrust too many nunchuks.

(Non-RMN regulars just read and re-read that last sentence 5-6 times, then gave up on figuring it out what it meant.  Here's the explanation.)

Here's where Chase Coffman became the best tight end we'll ever see.  He was so reliable that throwing to him actually resulted in more yards per target than Jeremy Maclin, All-American.  Here's also where Jared Perry, a.k.a. Will Franklin 2.0, began to show value.  He was a reasonably reliable option his first couple of years (obviously targeted much more in 2006 than 2007, when Maclin emerged), but while he still couldn't hit 70% from a Catch% perspective, his big-play ability went up a notch, and he went from averaging 7-8 yards per target to over 9.  Meanwhile, Jerrell Jackson registered with numbers very similar to Perry's freshman numbers, albeit on a small sample size. 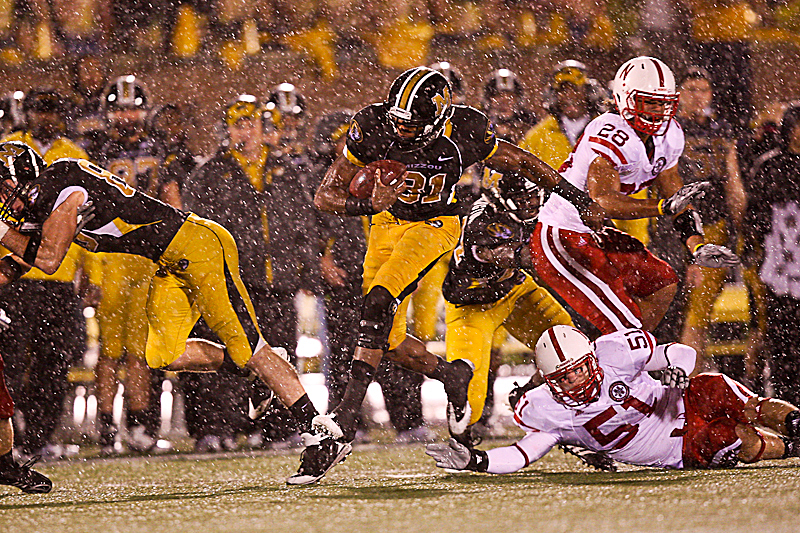 And here's where we find out just how amazing Danario Alexander has been this season (as if there were any doubt).  Looking only at receivers who were targeted at least ten times in a given season, Alexander's 11.3 per-target average is topped only by ... 2006 Danario Alexander, who was targeted only 21 times.  For Domino Axelrod Danario to be both this reliable and this explosive has just been amazing.

Here are the overall averages per position:

So for the last four seasons, here are your top ten in terms of Yards Per Target (with a minimum of ten targets):

Will Franklin, you are absolved.

Danario Alexander, you officially have a case for having been the best receiver in Mizzou history.