What If...Mizzou had signed Tyler Hansbrough? (Part One)

Share All sharing options for: What If...Mizzou had signed Tyler Hansbrough? (Part One)

A few different things were the catalysts for my finally writing this post that you had to know was coming:

First, at the MU-KU game last week, the guy in the section next to us (a "secondary" fan of UNC...just like my late buddy Jeffrey) mentioned it, and my eyes momentarily glazed over (before I shot back with, "Well, for starters...Quin Snyder would probably still be our coach," and ended that conversation).

Second, my high school best friend and I were talking about how Blake Griffin was becoming a "breakthrough" recruit for Jeff Capel--he was a near-gimme to go to OU, but his success led to OU signing Willie Warren, and OU's current success led (in part) to OU signing guys like Keith Gallon and Tommy Mason-Griffin in the 2009 class.  Recruiting success tends to breed recruiting success, and somebody like Griffin can be a breakthrough recruit.  And naturally, the closest thing we've had to a "breakthrough recruit" in this state has been Hansbrough.

Finally, and most importantly, Mizzou is actually successful at the moment, making this trip into revisionist history a bit less painful.  It's an exercise in pure curiosity instead of longing and sadness.  Or something like that.

Alright, so let's set the stage. 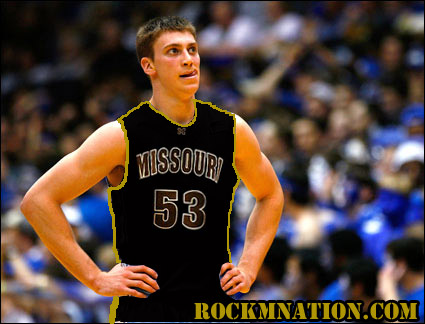 As time goes by, I lean more and more toward (c) just because of the way he seems to have connected with UNC and become an integral part of their history.  That, and the people who were swearing on (a) and (b) haven't really been right about much.  Anyway, for the purposes of this post, let's say his commitment was up for grabs right down to the last second, and on August 23, 2004, he decided to stay home and, starting in 2005-06, save both his home-state university's program, and Quin Snyder's tenure at Missouri.

What that means for the rest of the 2005 recruiting class: The '05 class consisted of Leo Lyons, unheralded Matt Lawrence, and the immortal James Douglas.  Future Purdue Boilermaker Keaton Grant and beefy Chicago PF DeAndre Thomas also signed, but Grant ended up at prep school, Thomas at JUCO.

At first I figured Hansbrough's signing would mean that the eventual soap opera signing of Lyons (then Leo Criswell) never happened, but really Mizzou was aiming for two bigs in that class, so most likely Hansbrough would have replaced Thomas.  I call that a pretty good trade.

Meanwhile, Mizzou was desperate for a JUCO point guard in this class, but they missed out on a series of them--Jamaal Brown, Eddie Smith, possibly Akeem Wright--before settling on Douglas, who didn't take long to prove that he probably didn't deserve a D1 scholarship.  The momentum caused by Hansbrough's signing may have led to Mizzou signing Brown or Smith, but...well, they didn't amount to anything either, so it doesn't really matter.  Just so it leads to me doing less work, we'll stick with Douglas.

The big question for the 2005 class is, would Hansbrough's signing have led Brandon Rush to give his big brother Kareem's school a longer look?  I say it probably would have.  But considering Mizzou didn't even end up in Rush's list of finalists, it's really hard to take the leap that not only would Hansbrough's signing have led Rush to make Mizzou a finalist, but it would have also led to his signing.

So in the end, the 2005 class is pretty easy: replace DeAndre Thomas (who never played for Mizzou anyway) with Tyler Hansbrough, et voila.

Just as a refresher, here's how the months following Hansbrough's commitment (to UNC) unfolded.  You may want to just skip to the next section--this isn't a fun trip down memory lane.  On the other hand, it should make you very much appreciate Mizzou's current run of good fortune.

Ahh, wasn't that fun?  So now that we've taken that pleasant trip down memory lane, let's see what happens starting in August 2005, when the Tyler Hansbrough Era officially begins.

I'll say this right up front: I'm not sure you could play the "Drop one player onto a different team" game with any other team and player in the country and make a bigger difference than dropping Tyler Hansbrough onto the 2005-06 Missouri Tigers.  Simply by adding Hansbrough's 30 MPG to the team and taking minutes away from Marshall Brown, Kevin Young, Kalen Grimes and Leo Lyons, you turn that bad Missouri squad into an NCAA Tourney team.  Seriously.

Mizzou's guard play is still a bit shaky, as McKinney and Horton still combine for over 60 minutes of court time between the two of them, but Mizzou has a legitimate inside-outside combo in Gardner and Hansbrough, and that would make any offense flow pretty well.

* Because Mizzou doesn't lose to Sam Houston, they actually get to move on in the Preseason NIT, beating (I assume) Drexel and facing Duke and UCLA in The Gahhhden.  And because UCLA barely beat Drexel, I say Mizzou knocks them off.

** And I assume that, even though Mizzou still gets murdered by Illinois, there is no Popcorn Incident.

*** And with an all-conference talent and much more momentum, I did take creative liberties with two games.  Mizzou lost 10 of 11 following the KU win in real-life, but without the downward spiral that was Quin's dismissal and all the fallout, I say the slump isn't quite that bad.  I added five extra points to two of the games (@ NU, UT) so that a 1-10 streak is actually only about a 5-6 streak.  Not great, but not nearly as terrible.

So thanks to Tyler Hansbrough and his 18 PPG and 8 RPG, Mizzou heads to the Big 12 Tournament at 22-8 with a first-round bye and an RPI in the high-30s/low-40s.  They are a lock for the NCAAs.  One guy makes that much of a difference to a team with pretty putrid post options.

So despite Mizzou's overall success, their mediocre slide to end the season continues with an unceremonious 78-63 loss to 5-seed Texas A&M in the Big 12 quarterfinals.  Mizzou is 22-9 headed to Selection Sunday.

(Notice I also bumped Hansbrough-less UNC team from a 3-seed to a 6.)

Without going into too much detail, we'll say that a) Mizzou beats Kentucky, b) Mizzou gets dumped by UConn, and c) George Mason still goes to the Final Four.

So Mizzou goes 23-10 with an NCAA Second Round appearance in Tyler Hansbrough's freshman year, just slightly better than the real-life 12-16. Like a lot of Quin Snyder teams, this one showed early flashes that built expectations beyond where they had started...and then failed to meet those new expectations.  In this case, they went 6-6 after a big win over KU put them at 16-2 overall, their best start under Quin Snyder.

But most notably...after a return trip to the NCAA tourney, Quin Snyder does not get fired.  As we progress through the rest of Hansbrough's "career" in Columbia, we will have to beg the question of whether that's a good thing or a bad thing.