We are without Doug this week...he's busy watching NAIA basketball...

Needless to say, this week's questions are pretty easy.

1 - First up, thoughts on Mizzou's Big 12 Tournament win last weekend?  Was it simply a bout of good fortune (playing the 7, 9, and 11 seeds) and timely play, or was it more significant than that?  And yes, I made that question intentionally vague.

2 - Alright, take a look at the bracket and tell me...who's your Elite Eight matchup in the East Region?

The Beef: I think I saw part of the Division II NAIA Women’s Championship last night, Morningside and Hastings…yeah…we just got the CBS College Sports Channel…I was wondering what they would have on it…cannot say I was surprised that it was on…CAN say I am surprised Doug is being subjected to a similar level of play

1 - It is definitely a mix of 3.  Like I said earlier in the week, my expectations changed as soon as OU lost to OSU because by that point, the entire tournament had been placed at our feet from a seeding standpoint.  Did we still need to go out and win those games?  Absolutely.  We had to beat a tournament team in what basically amounted to a road game, and then beat a team playing their best basketball in months, if not the entire season.  We got the job done, and that is what counts the most in the end.

2 - On the bracket I JUST filled out for work, I had Florida State getting calls and beating Pitt to get one Elite 8 spot, while Duke would get the other.

3 - Ugh…this bracket and group just blows…plain and simple.  It is no secret I think OU is done and I think they get clipped by Clemson.  In the end, I will say UNC gets there in ugly fashion (after getting Lawson back for the Sweet 16 game) and they will play Arizona State

4 - Toughest group, and I see Wake upsetting L’ville and playing Michigan State there

5 - Though I don’t like them getting past the Elite 8, I do have UCONN getting there against Memphis in what will be the marquee Elite 8 game.

Michael Atchison: 1 - It was both, I suppose.  Sure, the bracket broke wide open, but that team showed something.  I don’t think they played their best all weekend, but they methodically put teams away.  Oklahoma State has been really good of late, and they were playing a quasi-home game, and despite the fact that the Tigers couldn’t shoot a lick, they managed to seize control of the game in the second half.  These guys have figured something out about the dynamics of a game.  I was very pleased by how workmanlike the effort was.

2 - Chalk in the East: Pitt vs. Duke (though the survivor of UCLA/Villanova will give Duke one hell of a game).

3 - North Carolina vs. Arizona State.  I’m having a hard time believing in the bottom half of that bracket.  Syracuse was great in New York, but they have fallen apart at times this year, and Oklahoma doesn’t look like the same team they were a month ago.

5 - I really think UConn gets there, and I really want to believe Missouri does, too.

ZouDave: "Needless to say, this week's questions are pretty easy."

1 - As with most of these types of questions, the truth is in the middle.  I think we would have beaten aTm if they'd beaten Tech, and I think we would have given Oklahoma a helluva run and if we're shooting well we're going to have a chance.  OSU isn't a pushover, despite their conference finish.  If kansas had been able to beat Baylor, and then Texas, it would have been interesting to see which team took it more seriously.  But hey, we beat who they put in front of us.  That's all we can do.  We were as good as we needed to be, which was the case almost every single time we took the floor this year.

2 - Quite boringly (is that a word?), I will take Pitt and Duke.  I know Duke isn't exactly a juggernaut this year, but they are pretty damn good.  Pitt has as good a chance as anyone to win the whole damn thing.

3 - Wow, these questions are easy.  North Carolina for sure, and then either Syracuse or Clemson...I can't quite decide which.  I really like Clemson's athleticism, but it's hard to count out Syracuse.  We at least know they're not going to get tired!

4 - Louisville........and..............man I have no idea.  Most likely Michigan State, but it really could easily be kansas.  If they are shooting well, they can be pretty damn good (quite obviously).  On the other hand, the kansas team we've seen in the last couple of weeks is going to have a hard time with North Dakota State.  Really tough to say.  I don't see MSU losing before the Elite 8 if kansas isn't involved.

5 - UConn (I like picking #1 seeds, apparently) and then the winner of Memphis and Missouri.  I think it will be Memphis, and it probably should be Memphis, but I think we're the kind of team that can beat them.  It would take one of our best efforts of the season, but it's totally possible.

ZouDave: Hey, NAIA basketball is pretty entertaining.  My dad has gone to basically every NAIA tournament since 1958 (other than the ones he missed due to being in Vietnam) and I've gone with him to a handful...it's a fun tournament to be a part of.  It may not be much better than the HS Tournament we go to in Springfield, but the games are always fun and there's often some pretty good players there.

rptgwb: 1. While I think Mizzou benefited from outstanding fortune, how many Missouri teams of the past would have been able to take advantage of that fortune? Missouri seemed like they were in control the entire weekend.

An incredibly boring bracket, I know.

ZouDave: I don't like letting my rants go unnoticed, so...

you think a team being proud of what they accomplished means we're discounting all other teams' accomplishments, past and present. The fact...THE FACT...that Missouri won the Big XII Tournament this year has no bearing on anything you've ever done in the past. But, if we show how happy we are that we've done it you guys refuse to miss the chance to point out how many you've won before.

Your entire meaning in life exists in the moment where you get to remind someone you cheer for a team that has had more success in basketball than ours. It defines your moods, it defines your relationships, it defines your decisions. This is backed up by the fact that you are even here. I wouldn't go to a ku message board to see naked pictures of Megan Fox (well, ok, I would) let alone go there to try to talk to you people. I don't ****ing care what you do, what you've done, or what you think. But, here you are, like always, running your mouths.

Why in the hell do you care what we think about your team, past, present or future? You'll say you don't, but yet you're still here, still not missing any chance to point out you've won 2 National Titles in the last 50+ years. Whoop-de-****ing-doo. We're happy that we won the Big XII Tourney this year, we're happy we finally placed in the top 3 of the Big XII for the first time in basketball, and we're happy to be back in the NCAA Tournament for the first time in 6 years. Why does it have to be about kansas?

The answer is because you have this undying need to be validated by us, and sad as it is we are your litmus test for success. You are happy as long as you measure up positively as compared to Mizzou. Wow, way to set your sights high. Do you make fun of homeless people, too?

Perspective. ****ing please. You wouldn't know perspective if I highlighted it in the dictionary. 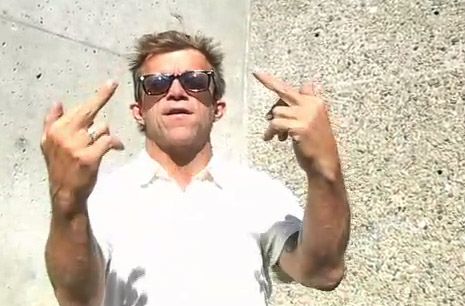 The Beef: I just wanted to make sure your rant did not go unnoticed  :-)

ZouDave: I've become a lot more bitter in the last couple of months.  I really have almost no tolerance of any kind for aggravation anymore.  Not sure what has caused it, other than I'm older than everything except Atch.

The Beef: I typed in crotchety and this was a pic I got….made me laugh…nothing to do with nothing (just to make sure this roundtable meets the normal expectations)

The Beef: Here you go…though I still do not know WHO she is…

The Beef: I guess I was saying I don’t know who she is like WHY I should know who she is…I figure she is a movie person?  As for Atch…I imagine unless she is guest staring on The Wiggles (I’d make her wiggle…HEY OH) then she might be off of his radar

Michael Atchison: Why would I know who she is?  There are eleventy billion hot women on the internet.  Unless they do something other than hold a towel over their naughty parts, how am I supposed to keep them straight?

ZouDave: She was basically "discovered" in the Transformers movie from a couple of years ago, and is in the sequel coming out this summer and is supposed to be the star of the picture.  She's starting to do a lot of movies now because, well, she's a freaking sculpture of beauty.