Share All sharing options for: Blaine Gabbert 2009 versus Chase Daniel 2006 versus Brad Smith 2002 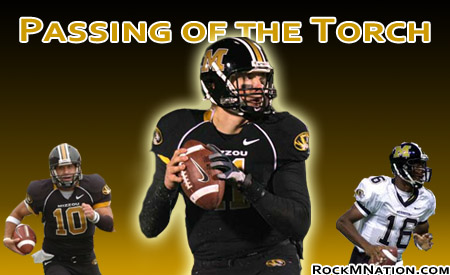 We're all clearly very curious about how Blaine Gabbert's performance--both in 2009 and down the line--may compare to that of Chase Daniel and Brad Smith, and while it's far too early to make any strong conclusions, I thought it would be interesting to compare scrimmage performances at this point in respective careers.  That would mean comparing Gabbert's 2009 spring to Daniel's 2006 spring, and to a lesser extent Brad Smith's 2002 spring.  Let's take a look!

While the torch was very clearly passed from Smith to Daniel after 2005, and from Daniel to Gabbert after 2008, 2002 was a complete mystery.  Missouri entered spring football '02 with an injury-prone incumbent (Kirk Farmer) battling two redshirt freshmen (Smith, Sonny Riccio).  There was quite a bit of pub for Smith's running ability, but that didn't really translate to practices where QBs are touched down.  In the first round of practices, Smith threw at least one interception just about every day, but he started playing well in the team's first scrimmage, throwing a TD pass to Ben Frederickson while rotating with Farmer and Riccio between the 1st and 2nd strings.

By the time the Black & Gold game came around, Smith was the leader for the starting job, but with his ascension came a lot of question marks.  Was it smart to anoint a redshirt freshman as the starter when a more proven commodity in Farmer was sitting on the bench?  The questions didn't necessarily subside when the defense dominated the '02 Black & Gold game.  Smith was by all means decent--12-for-21 passing, 89 yards, 1 TD, plus 22 yards rushing--but so was Farmer (11-for-18, 118 yards, 1 INT, 2 carries for 28 yards), and it did seem like Gary Pinkel was taking a leap of faith by going with the redshirt freshman.

Of course, 10 minutes into the Missouri-Illinois game, it was clearly obvious that Pinkel had made the right choice, but it's interesting to note how nondescript #16 had been the previous spring.

Many people tried to pretend that, entering the spring of 2006, Missouri had another QB battle on its hands.  Brandon Coleman was the old hand, the 5th-year senior.  Chase Patton was Golden Boy I, the redshirt Elite 11 sophomore from Rock Bridge who was going to put things together at any moment.  Sure, Chase Daniel had gotten valuable experience in 2005, playing in 9 games and saving Mizzou's season against Iowa State, but still...this is going to be a battle!

Yeah, right.  Coleman and Patton were clearly both decent quarterbacks, but this was Daniel's job from the moment the 2005 Independence Bowl ended.  He took vocal control over the offense immediately, and the results slowly started to come.  He was 15-for-25 for 189 yards in the spring's first scrimmage, by all means a decent performance.  But he improved by leaps and bounds just about every following practice.  By the end of spring, he was almost perfect.  He threw 12 passes in the '06 Black & Gold game, completing 11 of them for 120 yards and 2 TDs.  Granted, it helped having future Mackey Award winner Chase Coffman catching a lot of those passes, but it was clear that Daniel had taken over the job, and everybody else was fighting for a distant #2.

The run of success continued in August, as Daniel continued to put up obscene numbers.  From a 2006 preview article from Dave Matter:

He kept the same attitude throughout camp the last few weeks, refusing to acknowledge he was the No. 1 quarterback until Pinkel officially declared it Aug. 21.

There was never much doubt. Going back to the spring game, Daniel has completed 48 of 64 passes for 583 yards, five touchdowns and no interceptions in Missouri’s last four scrimmages. That computes to a quarterback rating of 177.3. For comparison’s sake, Arizona State’s Rudy Carpenter led the nation last year with a 175.0 rating.

For Daniel, the results started coming around the Black & Gold game, and they didn't stop until the end of the 2008 season. So where does Gabbert stand?  Clearly there's still plenty to learn, and clearly you still can't glean too much from these results, but Gabbert is more than holding his own against previous spring performances from Smith and Daniel.  Apparently the lightbulb came on back in December during bowl practices, and ever since, Gabbert has been running the show.

In Scrimmage #1, Gabbert threw mostly short routes on the way to a lovely 27-for-37 (73%) performance for 203 yards (5.5 per pass), 1 TD, and 1 INT.  That defeats Daniel's first spring scrimmage, though as we covered above, Daniel figured things out pretty quickly.

What was the point of this exercise?  There really wasn't one.  As much as you can draw conclusions from spring ball, it's pretty easy to conclude that, with his first spring as #1 QB almost out of the way, Blaine Gabbert has taken the necessary steps to becoming Missouri's next very good starting quarterback.  Or as David Yost put it in yesterday's strong Post-Dispatch feature:

"He's doing all the things we want him to do at this time," said David Yost, Pinkel's new offensive coordinator and longtime quarterbacks coach. "He's really kind of pressing himself into looking like a Big 12 quarterback that can lead a team to victories, and that's what our purpose was this spring — to see how far we can push him and see where he can get to and what he can do for us.

"The better he can do, the better we're going to be."