Share All sharing options for: Spring Football Post-Mortem: The Defense 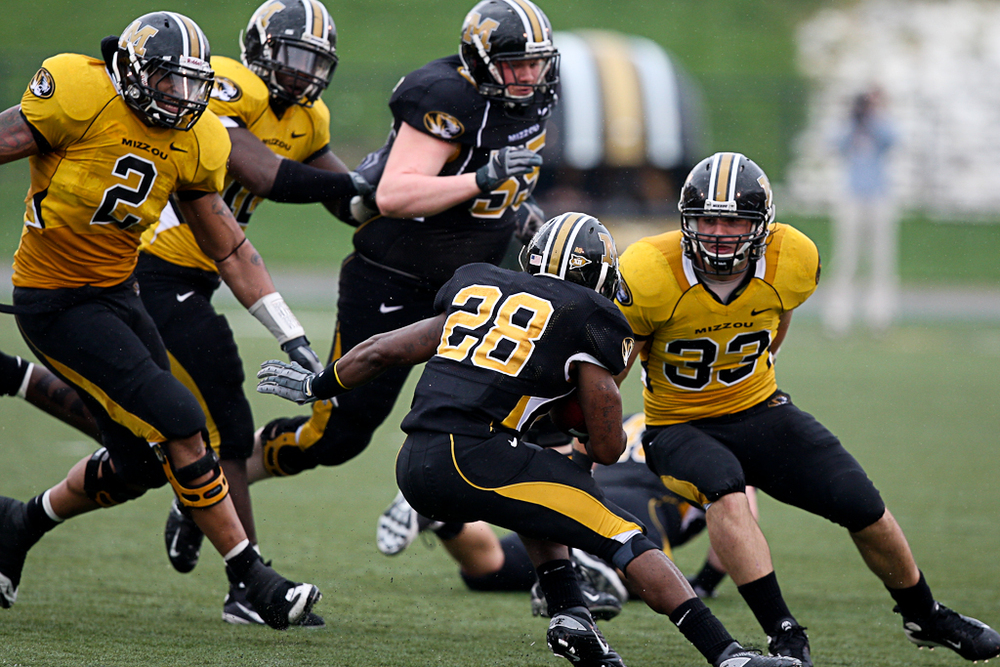 Yeah, it didn't take me long to fall in love with Aldon Smith, who was the most disruptive, and vocal, defensive end I saw.  He, Jacquies Smith, and God Coulter all pass the eyeball test and didn't really ever find themselves out of position.  It was what I hoped to see, and I saw it.  Plus, it's fun having two badass DEs (J. Smith, Coulter) wearing single digits.  Don't ask me why.

I watched Brad Madison and Marcus Malbrough quite a bit, and at the very least they seemed competent, though they didn't make a lot of noise.  The star of the line really was #85, A. Smith.  He sacked Gabbert in the redzone and unleashed a primal yell that could be heard at the Med School.

As for the defensive tackles, I was quickly reminded of how good Jaron Baston can be.  He's a fun combination of smart and crazy, and I really like him as the anchor of the line.  The only other DT I noticed was Dominique Hamilton, who despite having 0 tackles made a couple of nice plays beyond the almost-INT (which I'm convinced he dropped just because he didn't want to have to run the 70-80 yards of open field that were in front of him had he held on).  Terrell Resonno really didn't make any noise, but that's not always necessarily a bad thing from a DT, I guess.

I love this unit.  A lot.  Maybe not as much as rptgwb, but a lot.  There's really nothing more to say about Sean Weatherspoon, so I won't say anything--you know what you're getting from him.  Beyond that, though, Andrew Gachkar and Luke Lambert both looked excellent--both fast and smart--and you know how much we at RMN love us some Will Ebner, who may not even get much playing time this year due to how good GACK and Lambert look.  This is a strong, punishing unit of LBs, and it will absolutely be a strength of this defense.  This unit replicates the personality of its defensive coordinator.

Also, as rptgwb mentioned Saturday evening, Mizzou rarely went to a nickel package because GACK seemed more than capable of lining up against a TE or slot WR.  If you can get away with base 4-3 in passing situations, you can disguise what you're doing a lot more.  Says me, anyway.

I really wanted to see something good out of the DBs, and I think I got my wish.  At cornerback, Carl Gettis did what he always seems to do (2008 KU and NW'ern games aside)--blend into the woodwork, do nothing to get noticed, and prevent the QB from even thinking about throwing to the guy he's covering.  Meanwhile, both Kevin Rutland and Kip Edwards looked awesome.  Loved what I saw from them.  Trey Hobson looked decent, as well.  I didn't really notice anything from Munir Prince or Robert Steeples.

At safety, yeah...if not for Gettis, Kenji Jackson would be getting most of my mancrush attention.  Mizzou safeties like Jason Simpson, David Overstreet, and William Moore showed a trend of looking lost their freshman years, looking decent their sophomore years, and breaking through in their junior years (and, ahem, having disappointing senior seasons).  Kenji already looks like a breakout junior, only he's a true sophomore.  He deserves to wear #13, as he plays EXACTLY like Pig Brown, laying back and punishing anybody who offends him by thinking about catching a ball in his neighborhood.

Beyond Jackson, if there was one thing I was disappointed about in this scrimmage, it was that the offense never really tried to attack Hardy Ricks.  You know from previous posts that I don't trust him at all, and I really wanted to see him being challenged.  As it was, nothing really happened in his neighborhood.  He didn't do anything wrong, persay, but he also only had 0.5 tackles.  Jerrell Harrison, meanwhile, looked pretty decent, but nothing really happened in his area either.  If anybody looked impressive beyond KJ13, it was Mr. Zaviar Gooden, who is as physically impressive as a safety will ever be.  Dude can hit.  Shawn Scott made the mistake of trying to bounce a run outside, and he was not only caught, but rudely and effortlessly thrown down by Gooden.

We witnessed the creation of a new RMN legend/nickname on Saturday.  At halftime we learned Mizzou coaches don't call this unit "Special Teams," but "Special Forces."  After joking about Grant Ressel spending his offseason sniping pirates in the ocean, we set about giving everybody in this unit official titles.  And then ZouDave unleashed this stream of consciousness: "So does that mean Admiral Wolfert is being replaced by Sergeant Mills?  Corporal Mills?  General Mi...GENERAL MILLS!!!  YES!!!!"

From this point forward, Tanner Mills will heretofore be called General Mills.

With that out of the way, I can confirm that General Mills does indeed have a freaking cannon for a leg.  He boomed the first kickoff of the scrimmage about six yards deep in the endzone, and the kickoffs that didn't reach the endzone hung in the air a long time.  That will be a special teams strength.

As for place-kicking, Mills and all the kickers were fine.  Not great, not terrible, just fine.  Mills was only 2-for-4, but the ball looks good coming off his foot, and while he may not be Jeff Wolfert, he won't be Joe Tantarelli either.  (Sorry, Joey Tants.)  The other two kickers--Gunnysergeant Trey Barrow and Corporal Ressel--looked fine too, with Ressel looking to have at least a smidge more leg strength.

To punting, where all I can say is, Captain Jake Harry looked like crap last spring too.  He was, I guess, in mid-spring form on Saturday, and I'm just going to close my eyes and convince myself that when the games are real, he'll be ready.  Moving on...

...to returns, where I can confirm (shocker) that none of the potential kicker returners are in fact Jeremy Maclin.  Carl Gettis (punt) and Munir Prince (kickoff) both had trouble fielding the ball, and from what I've seen and read previously, it wouldn't surprise me if the September starters were Gahn McGaffie (punt) and Kip Edwards (kickoff).  No idea on their return skills, as it was basically just kicker/punter vs returner out there.

(One of these years, a kicker will fulfill my wish and attempt an onside kick against air...and celebrate upon recovery.  One of these days.)

I'll say this much for the 2009 Missouri defense: there will not be a harder-hitting unit in the Big 12 North.  This was a strength of last year's defense, and with the addition of guys like Aldon Smith, Gachkar, Ebner, and a matured version of Kenji Jackson (plus guys like Gooden waiting in the wings), it's only going to become a more pronounced strength in 2009.  This unit is high on attitude and personality (at one point, Jaron Baston was dancing to the music in his head late in Saturday's scrimmage, forever earning my affection), and hopefully it will be high on production as well.

You never know how smart or consistent a defense is going to be until they play against opponents they haven't been practicing against non-stop, but I'm optimistic that despite the lost starters, this defense will play to at least the level of last year's defense, and as you may remember, last year's defense may not have been as bad as you thought.