It's bad enough starting 0-2.  At 0-2, you have to finish 6-3 just to become bowl eligible, and with road games against the Big 8's top three teams--Nebraska, Oklahoma, Oklahoma State--not to mention a huge home game against Notre Dame on the horizon, suddenly finding six wins was becoming rather difficult.

But Mizzou was 0-2 after having had the ball in their hands with a chance to win both games, against both Illinois and Wisconsin.  Now, not only was Mizzou going to have to get hot, but they were going to have to do so while swimming against a tide of heartbreak and negative momentum. 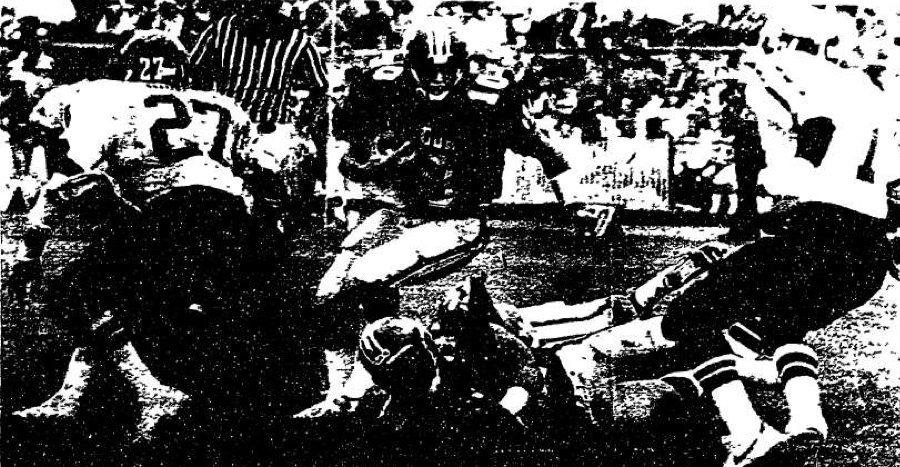 Momentum creates more momentum, and for Missouri it was all bad.  After two gut-wrenching losses, Mizzou found themselves behind 23-14 with 3:00 left in the second quarter against a Mississippi State team that would finish the season 4-7.  The Bulldogs had racked up two touchdowns runs of more than 50 yards and were rolling into halftime with almost 300 yards of total offense.  Mizzou defenders were yelling at each other on the sideline.  Warren Seitz, who had completely outplayed Marlon Adler and taken over the #1 position at quarterback, was knocked out of the game with a rib injury.

An already shaky season was in danger of completely unraveling.  And then Warren Powers coached two and a half perfect quarters.

It started with a trick play--third-string senior QB Kerry Holloway lined up at fullback, took a handoff from Marlon Adler, ran right, and threw left to a wide-open Adler for 31 yards.  That sparked the offense.  Adler quickly hit George Shorthose for a 36-yard touchdown to cut the lead to 23-21, and then hit Andy Hill for a big gain to set up a go-ahead field goal right before half.

Then Powers used nouns and verbs, and probably quite a few choice adverbs, in sparking the defense.  A fiery halftime speech got the defense rolling, and Mizzou coasted in the second half.  Adler staked his claim to the #1 QB position, finishing the game 15-for-21 for 258 yards and 2 TDs.  Hill had 119 yards receiving, and Mizzou had its first win of the year.  Bring on Notre Dame!

Mizzou found a spark just in the nick of time against Mississippi State, and while they brought a losing record into a home battle versus Notre Dame--the last meeting, to date, between the two schools--they had at least regained their confidence.  In front of 70,915 in attendance at Faurot Field, and a national TV audience, they also brought something else: gold jerseys.  And I don't mean gold tops.  Gold, head to toe.

Early on, the gold seemed to give the Tigers an edge.  On their first possession, they drove the ball 79 yards to the Notre Dame 1.  On 4th and goal, Eric Drain took the handoff with a choice to make: dive over the top of the pile, or lower his shoulder and power into the endzone.  He chose the aerial route, and he was rebuffed.  Notre Dame took over, and though Missouri immediately forced a safety to take a 2-0 lead, they had still lost the opportunity at five more points.

The Irish had a 3-2 lead when ND QB Steve Buerlein struck gold (/pun) in the form of a 74-yard touchdown pass to WR Reggie Ward.  Irish kicker John Carney added a FG, and Notre Dame took a 13-2 lead into halftime.

But if there's one thing we've already learned about Missouri's 1984 season, it's that no double-digit lead was safe, no matter which team held it.  Early in the third quarter, Marlon Adler--again the #1 QB--found Andy Hill for 15 yards to cap a 14-play drive, but the 2-point conversion pass failed and the score was 13-8 Notre Dame.  Another Carney field goal made the score 16-8, and the stage was set for another crazy finish.

With eight minutes left and Notre Dame trying to work the clock as much as possible, DE Erik McMillan deflected a Buerlein pass and DT Richard Scott intercepted it.  With the passing game mostly ineffective, Missouri leaned on Drain, who eventually scored from two yards out to make the score 16-14 with 4:09 left.  On the 2-point conversion attempt, Notre Dame snuffed an option attempt from Adler and maintained a two-point lead.  Mizzou had attempted three game-changing 2-point conversions early in 1984 and had failed on all three.

The game wasn't over, though.  With 1:09 left, Missouri took possession at their own 16-yard line, and Adler found a rhythm.  Miraculously Mizzou worked its way into field goal position, and with 0:07 left, kicker Brad Burditt took the field with the chance to make a very makeable 39-yard field goal.

Nope.  Burditt shanked the kick, which came up about two yards short of the crossbar.  In front of a capacity crowd at Faurot Field, Missouri faced its third opportunity of the season to come through in the clutch and failed once again.  The third heartbreaking loss of the season gave Mizzou a 1-3 record with road games against Nebraska, Oklahoma, and what was turning out to be the best Oklahoma State team in quite a while, on the horizon. 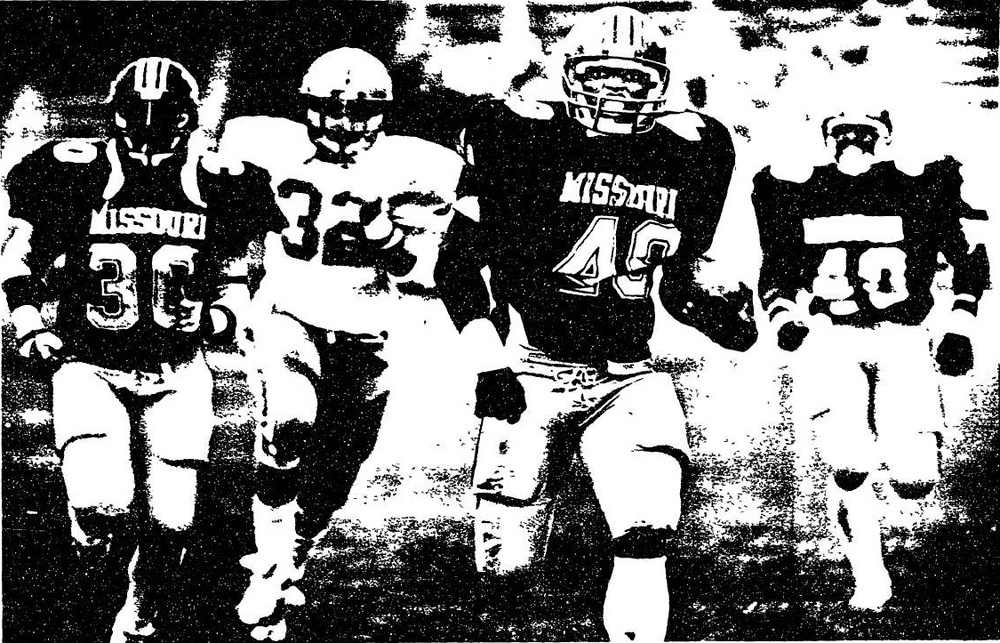 Missouri had gained at least 425 yards in every game of the 1984 season, and yet only had a 1-3 record to show for it, in part because of failures in the clutch.  Luckily, there would be no need for clutch play against a terrible Colorado team in Missouri's fourth straight home game.

Ever since a surprise Orange Bowl trip during the 1976 season, Colorado had fallen into a black hole.  Longtime assistant Bill McCartney took over the Buffs in 1982 and said up front that it would take five years to build a winning program.  Halfway through year three, CU was just 6-19-1 under McCartney and looked like the perfect antidote for a Missouri team suffering from a thrice-broken heart and desperate for confidence and momentum.

Most likely due to playing from behind so much, the Colorado offense came into the game averaging almost 280 passing yards per game; but with Mizzou DBs Terry Matichak and Jerome Caver both healthy for the first time all season, Colorado would only pass for 190 yards, almost half of which would come from the backup CU quarterback in the fourth quarter.  Mizzou piled up nine tackles for loss, and Colorado would only score once.

Meanwhile, the MU offensive line had what some would call a pretty good day.  All Mizzou did on offense was rush for an obscene 512 yards.  Jon Redd and Marlon Adler both put up over 150 yards each, Mizzou averaged 8.0 yards per play for the game (639 total yards), and Mizzou coasted.

After the CU-MU game, CU coach Bill McCartney called Missouri the best team they had played all season; they had played Michigan State, Oregon, Notre Dame and UCLA.  Clearly this was a team with talent and explosiveness--through five games they were averaging a ridiculous 499.4 yards per game on offense, second-most in the nation--but those three heart-breaking losses were holding Mizzou back.  Now, to become bowl eligible, they would have to take out the three lesser teams on the schedule (KSU, ISU, KU) and upset a big dog, either NU, OU, or OSU.

The first crack came at Nebraska, who had been ranked #1 until a suprise loss to Syracuse a couple weeks previous, and who had won five in a row against Missouri ever since Mizzou's classic upset in Lincoln in 1978 (though every one of those games was competitive).

Mizzou hung tight early.  Nebraska muffed a punt in the first quarter, and two plays later Eric Drain rumbled 15 yards for a TD and a 7-0 Mizzou lead six minutes into the game.  NU tied it at 7-7, but Mizzou had a golden opportunity on its next series when Drain drifted uncovered into the Husker secondary, but he dropped a Marlon Adler pass, and Mizzou had to punt.  The Husker defense tightened up in the second quarter.  They sacked Adler in the endzone for a safety, and a few minutes later knocked Adler out of the game with a concussion on an option run.  Warren Seitz came in and led Mizzou to a late-second quarter field goal, and Mizzou went into halftime down only 16-10.

In the second half, however, hope faded.  The Tiger defense did all it could to slow down the always potent NU offense, holding the Huskers to two first downs in the third quarter; but the Mizzou offense fell apart.  Drain fumbled early in the second half to set the Huskers up well, but the Tigers stuffed NU on fourth-and-1; then, LB Marc Munford picked off Seitz near midfield and took it back for a touchdown.  A Husker FG made the score 26-10 heading into the fourth quarter.  Mizzou struck back to make the score 26-17 (why didn't they go for 2?), but Nebraska took advantage of a tired Mizzou D and engineered a perfect 80-yard touchdown drive to put the game out of reach.

With one upset opportunity blown, Missouri then traveled to Manhattan to face a K-State team had just whooped Kansas for its second conference win in two years.  KSU hadn't totally fallen into its late-'80s abyss yet, but this still wasn't too strong a program, and any chances Mizzou had of making a bowl run hinged on their taking care of business at KSU.

They did just that.  When George Shorthose caught a 48-yard touchdown pass from Marlon Adler late in the first quarter in front of just 28,200 in Manhattan, Mizzou was off to a 21-0 start.  The lead would balloon to 41-7 midway through the third quarter, and then the MU scrubs outplayed KSU's as well.  In limited action, Adler had 184 yards passing, 51 yards rushing, and four combined touchdowns, and Mizzou was back to within one game of .500 with another easily winnable game--Homecoming against Iowa State--coming up the next week.

Next: the bottom drops out.