Share All sharing options for: 1978: Powers Starts Strong, and Don't Get in Wilder's Way (Part Two)

Warren Powers' tenure at Mizzou could not have started any better had pulled a trade for Joe Montana at halftime.  Mizzou had traveled to South Bend and upset Montana and the defending national champions on their home field.  Their reward?  A visit from #1 Alabama.  Seriously, who schedules like this*?

* Besides Missouri, the answer to this question was...Alabama, who had faced Nebraska in Birmingham the week before the Missouri game and was hosting USC the week after.  Good god.

A home opener against the #1 team in the country is going to be a pretty hot ticket no matter what, and sure enough pretty much every hotel room in the city of Columbia had already been booked before Missouri went out and beat Notre Dame?  But after the huge upset and Missouri's meteoric rise from unranked to #11 in the country?  Let's just say it was a good thing that the university had just completed the stadium expansion in the South endzone.

Bryant, however, had never beaten Missouri in his Tuscaloosa tenure.  Missouri had won their two previous matchups, both in relatively dominant fashion--a 35-10 win in the 1968 Gator Bowl, and a 20-7 season-opening thumping in Birmingham in 1975.  Mizzou was also a bit of a sandwich game for them--it was a tricky road trip between home games (in Birmingham) against Nebraska (#10 at the time) and USC (#8).  If anything, though, Mizzou's win over Notre Dame served as a bit of a wake-up call.  Now the Tigers were also a highly-ranked team, and the game at Faurot would take place in front of both a record number of fans in the stands (73,655) and a record number of national journalists covering the proceedings.

From the outset, Bama was ready.  On a muggy, 85-degree afternoon in mid-Missouri, they took only six plays to move 71 yards on the opening possession, and a Major Ogilvie run put them up 7-0.  An all-too-quick Mizzou possession led to a quick punt, and Alabama quickly scored again (Jeff Rutledge to TE Rick Neal) to make the score 14-0.  Missouri apparently hadn't yet shaken off the hangover of the previous week's win, and they were already on the verge of getting blown out of the water.

Three minutes into the second quarter, the Crimson Tide kicked a field goal to go up 17-0, and finally Mizzou woke up.  Led by James Wilder and Phil Bradley, they methodically marched down the field, scoring when Earl Gant plowed in from four yards out.  The Mizzou defense was perking up by this point, and they quickly forced an Alabama punt.  After a short Wilder run, Bradley ran a picture-perfect option keeper to the right, found a crease, and shot out the backfield like a cannonball.  With great downfield blocking, he weaved his way through the entire Alabama defense for a 69-yard touchdown.  Bradley went crazy in the endzone, the crowd (many of whom were basically just standing outside the north endzone) were doing the same.  Suddenly Memorial Stadium was a hornet's nest, and the #1 team in the country was stumbling. 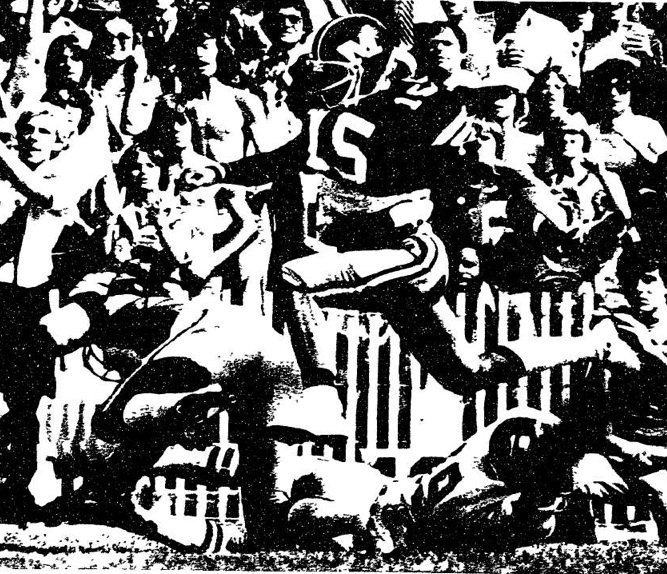 Phil Bradley with one of the prettiest TD runs you'll ever see.

Then it got even worse for Alabama.  On their second play of the following drive, Rutledge threw an out toward Neal, but it hung in the air too long.  Russ Calabrese stepped in front of Neal for the interception, and weaved his way into the endzone for a pick six.  After sleepwalking through the first 18 minutes of the game, Missouri had woken up and played 12 of the best minutes a Mizzou team had ever played.  They would take an improbable 20-17 lead into halftime.

Bear Bryant won a lot of games in his career.  In the process, there were probably quite a few times where he had to light a fire under an underachieving bunch at halftime.  It was probably pretty familiar territory for him, and to say the least, he said the things that needed to be said.  'Bama came out of the locker room having been verbally slapped around a bit, and in turn they decided to slap Missouri around. 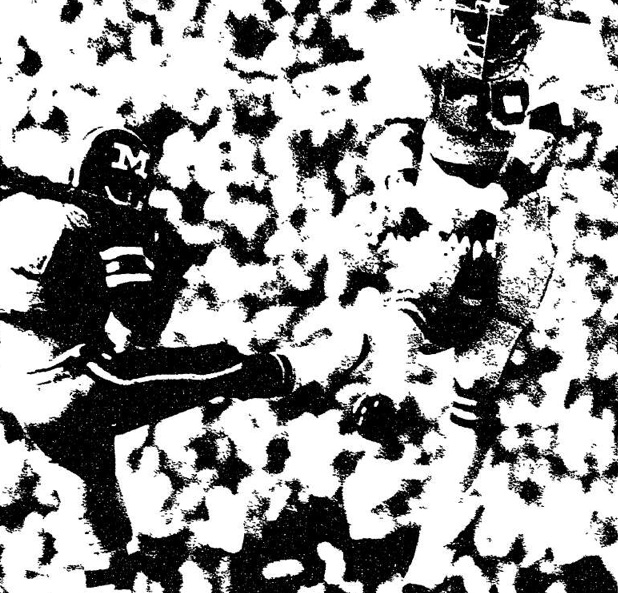 The blocked punt changed the game.

Momentum was Missouri's best friend and worst enemy on that muggy afternoon.  In the end, the Tigers only really played well for about one full quarter, and no matter how amazing were in that stretch, that's not good enough to beat the #1 team in the country.  Sans the Bama partisans in the crowd, most of the 70K in attendance went home disappointed, but they had gotten glimpses of how good this team would be, and 60,000 of them would be back to see even more glimpses seven days later. 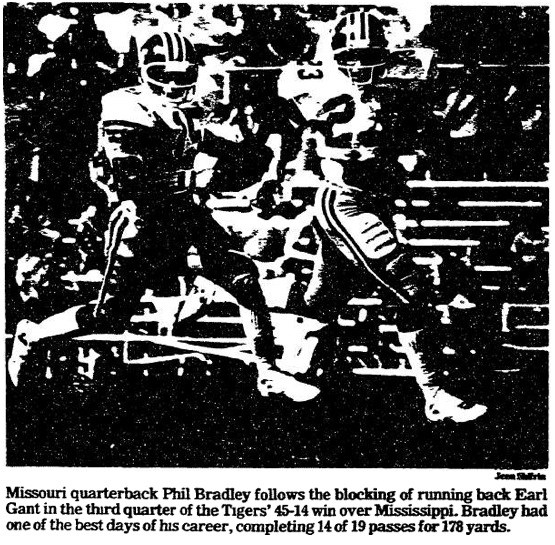 It has been quite some time since Missouri has put together such an awesome overall performance.

If there were still lingering concerns about Phil Bradley's overall abilities as a quarterback, his performance helped to alleviate them.  Bradley went 14-for-19 passing (spreading the love to seven receivers) with 178 yards and 2 TDs while adding 34 rushing yards.  In all, Mizzou rushed for 327 yards and passed for 207.  They sacked Ole Miss QBs ten times and held the Rebels to 186 total yards, and the only reason this game was even as close as it was, was because of four first-half Mizzou fumbles.

Leo Lewis muffed an early Rebel punt, which set up Ole Miss for a quick 7-0 lead.  Mizzou fumbled the ensuing kickoff as well (shades of the 1984 Iowa State game!), but three straight sacks kept Ole Miss from going up double digits.  Then it was fullback Gerry Ellis' turn to fumble.  Once again, Mizzou's defense held, however, and then Ellis atoned for his mistake by busting a 77-yard touchdown run.  Butter fingers kept Mizzou from pulling away for a while (it was only 17-14 Mizzou at halftime), but it was only a matter of time.  The Mizzou running game went crazy in the second half--Ellis ended up with 114 yards, James Wilder 75--and Mizzou used a 21-0 fourth quarter surge to make the final score look a little more accurate.

Seriously, this game might have been about 59-7 without the fumbles.

So through three games, Mizzou had beaten the #5 team on the road, led the #1 team at halftime, and thoroughly dominated a not-great-but-not-terrible SEC team at home.  They had clearly established themselves as one of the top teams in the country.  That was the good news.  The bad news?  The schedule wasn't getting any easier.  Thanks to a USC win over Alabama, there was a new team at #1; and thanks to the schedule makers, Mizzou got to play their second top-ranked opponent in three weeks.  Brutal.

History hasn't been as kind to Barry Switzer as it has to other great coaches.  Maybe it's because he left the program on probation (then again, have you ever checked out the violations some of the other great historical coaches have committed?).  Maybe it's because of his restless, caricature-like personality.  Whatever the reason, it maybe be a bit hard to forget just how ridiculously good OU was for most of the 1970s, before the dry spell of the early-'80s and their (at least partially illegal) resurgence of the mid- to late-'80s.  When Kansas upset the Sooners, 23-3, in 1975, it was Switzer's first loss as OU head coach...and it was his 31st game.  Heading into 1978, Switzer's worst season had been a 9-2-1 affair in 1976, heading into the Missouri game, his career record was a ridiculous 54-5-1.

Oh yeah, and he had Billy Sims running the ball.

After the game, OU offensive tackle Sam Claphan said that the OU O-line "could be one of the best a college football team has ever had."  Considering how easily OU's backs got downfield--now's a good time to remind you that Missouri had shut out the defending national champion three weeks prior--it was hard to argue.  Missouri's offense got rolling in the second half and made things respectable, but in the end, OU was simply untouchable.  Sims ran for 166 yards, David Overstreet (yes, that David Overstreet) put up 153, QB Thomas Lott ran for 87, OU averaged 8.0 yards per play, and Mizzou never had a chance.

In the losing cause, Earl Gant and James Wilder combined for 237 rushing yards of their own, but clearly most of that came when the game was well out of reach.  Mizzou now faced a different type of challenge: after playing three Top 5 teams in four games, they approached the easiest portion of their schedule.  Could they keep their focus?  Could they find a second wind?

Next up: the schedule eases up a bit...and so does Missouri.