Share All sharing options for: 1966: Fourth-Quarter Rallies and Mid-Season Slumps (Part One)

The 1965 (Part One, Part Two, Part Three) Missouri team was one of the most talented ever to wear the black and gold.  Dan Devine had built a stout program in the mid-1960s, but the losses of Johnny Roland, Francis Peay, Gary Lane, etc., just had to cause at least a momentary drop-off, right?

In some ways, the 1966 season probably has some stories to tell about the 2009 season.  A team that had been building for a few years, peaked around a host of players that would be drafted together, leaving a talented, inexperienced squad in its wake for the following season?  Sound familiar?  So with that frame in mind, let's see what 1966 can tell us about what's in store once again for the Missouri football program.

One thing is near certain following a season like 1965: you're probably going to see a bump in ticket sales.  The 1966 season saw Missouri sell more than 35,000 season tickets (including students), a record at the time.  The team they would watch would still be well-coached--Dan Devine was still stalking the sidelines, after all--and talented, but would they win? 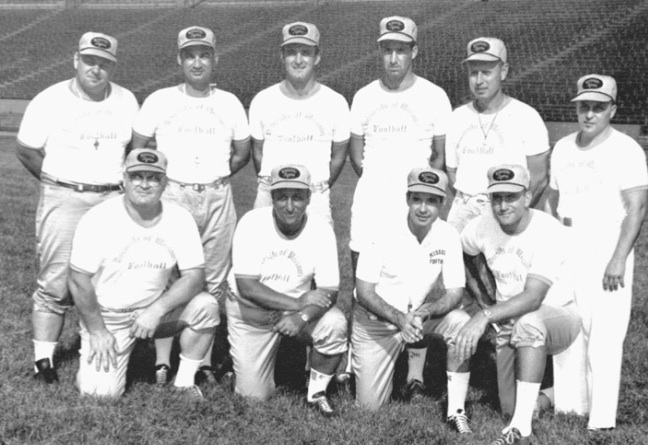 Offensively, there was one glaring question mark.  Johnny Roland would be a tough weapon to replace, but he was only a part-time halfback in 1965.  Charlie Brown (5'8, 190) had led the Big 8 in rushing, and he returned for his senior season, as did bruising Earl Denny (6'1, 210).  No, the biggest hole was left by departing QB Gary Lane.  Lane was an up-and-down player who rotated between terrible games (four interceptions, three fumbles against Kentucky in '65) and great ones.  He was still a fun talent, and all eyes would be on his replacement, Gary Kombrink.  Yes, there are 22 players on a football field, but a team will only get far if the QB doesn't get in the way.

Defensively, a couple of unknowns would make the most impact in 1966.  Hulking end Russ Washington would prove to be a total beast, and defensive back--and future NFL Hall of Famer--Roger Wehrli would make his debut in the defensive backfield.  We all know what Wehrli was capable of now, but he was an unknown quantity at the beginning of the season.  He would join an already-talented secondary with DBs Jim Whitaker and Bruce Grossnickle.  Missouri was not lacking on athletes, but the quality of the line was uncertain.

Here was SI's synopsis from their 1966 preview issue:

Back in the Big Eight, MISSOURI'S Dan Devine says, "This is the year I am going to test our alumni. When I came to Missouri, they assured me they didn't expect me to win every game, just be respectable. Now, I may find out if they meant it."

What the alumni will find out is that Devine, once again, has exaggerated the gloom-and-doom bit. Although the Tigers have lost Quarterback Gary Lane, Johnny Roland and all their starting tackles, there are enough lettermen and red-shirts around to make Nebraska and Colorado jumpy.

Devine has a quarterback—Gary Kombrink—who runs almost as well and passes even better than Lane, and he still has Halfbacks Charlie Brown, a chunky squirmer who led the conference in rushing with 937 yards last season, and Earl Denny, a power runner. Along with Ray Thorpe and new Fullback Barry Lischner, they will make Mizzou's wing-T power sweeps and off-tackle slants as fierce as ever.

Not even Devine worries about the defense. It will be tough to crack with 6-foot-6, 260-pound Russ Washington, who needs only to get meaner to be an All-America, at one end, 215-pound Bill Powell moved over to tackle from guard, and Don Nelson, a low-slung guard who is hard to root out.

Heading into the opener, the expectation was that Missouri would again be a solid team, but Nebraska was expected to run away with the conference, and their most likely challenger would be Colorado.  Mizzou and Oklahoma rounded out the likely top half of the conference.

Dan Devine still had talent to work with in 1966.

All eyes were on Gary Kombrink when the season began, and the first impression he left was a very, very good one.  Murray Warmath's Minnesota Golden Gophers came to town to kick off 1966. Minnesota had fallen off a bit since three straight top ten finishes to start the decade (including a 1960 national title that should have been Missouri's, ahem), having gone just 13-14-1 from 1963-65.

Entering the game, Devine was 2-0-1 head-to-head versus Warmath, but this one started out a battle.  Both teams had veteran defenses and young offenses, and points were at a premium.  A career-long 42-yard field goal by Mizzou's Bill Bates (no, not that one) was the only score of the first half.

In the second half, however, Mizzou seized control.  While Minnesota's offense would not once get inside Mizzou's 30, the Mizzou offense caught fire, moving 71 yards on six plays on the first possession of Q3.  A 46-yard pass to Earl Denny set up a 9-yard Charlie Brown run, and Mizzou was up 10-0.  Some trickeration (halfback pass from the kicker Bates, strangely enough) gave Mizzou a 17-0 lead, and then the defense joined in.  Linebacker John Douglas picked off a pass at the Gopher 28 and took it to the house.  24-0 Mizzou.

With a dominant defense, Mizzou played conservatively on offense, asking Kombrink to throw just eight passes.  He completed all eight, however, for 78 yards (he also added 63 rushing yards); Mizzou rushed for 279 yards, and Minnesota was toast.

Again from the Savitar.

The most fun thing about writing these history pieces is the discovery of great games you had no idea existed.  When Mizzou traveled east to Champaign for their second game of the season and first against Illinois since 1949 (not to mention their first of three straight road games), they were facing an Illini team coming off of three consecutive winning seasons; UI, however, was dumped by SMU, 26-7, in the season opener, causing Dan Devine to worry that the Illini would be even more fired up than before.

Illinois had All-American candidates on both sides of the ball; John Wright was the Big Ten's leading returning receiver and led a potentially explosive offense, while defensive end Bo Batchelder led a defense that had been exposed a bit by SMU's rollout passing.  A crowd of over 55,000 filled UI's Memorial Stadium, and they had to like what they saw the first three quarters.

Early on, it was Illini RB Cyril Pinder doing the damage.  On their first possession, UI unleashed a 13-play touchdown drive, highlighted by Pinder runs of 23 and 25 and capped by an over-the-top, 3-yard Pinder plunge to put the Illini up, 7-0.  After a second straight quick punt from Mizzou, Illinois rode the exact same gameplan to another touchdown.  Pinder and Wright did most of the damage, and Illinois converted third down after third down against Mizzou's tough defense; two minutes into the second quarter, it was 14-0 Illinois.

Thanks to some timely play from Gary Kornbrink, Mizzou struck back.  Chuck Weber caught a key third-down pass, and thanks to a great fake pitch to Charlie Brown by Kornbrink that fooled the entire Illini defense, Earl Denny scored easily from 19 yards out to bring Mizzou to within 14-7 at halftime.  From then on out, it was all about the Tiger defense.

Mizzou forced nothing but punts from Illinois in the third quarter, turning around the field-position battle but not quite being able to even up the score.  Early in the fourth quarter, Roger Wehrli officially announced his presence as a big-time player, making a nice pick of a Dean Volkman pass at the Illini 38.  The very next play, Kornbrink found Denny again--Denny was just as dangerous as a pass-catcher as a fullback--for 36 yards; Kornbrink snuck over from two yards out, and the game was tied at 14-14. 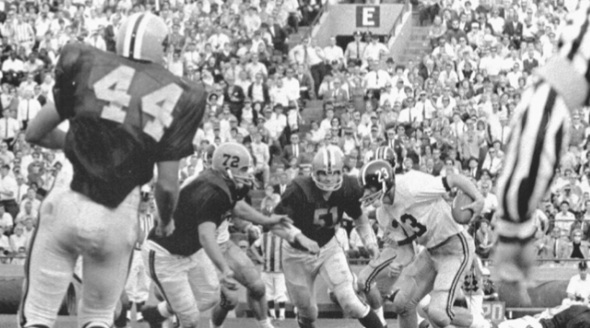 The Mizzou defense was not done.  With under three minutes remaining, Illinois began to drive again.  Wright and Pinder were finding their rhythm, but with 2:14 to go, Bill Whitaker stepped in front of a Volkman pass and took it 60 yards for a touchdown.  As time began to expire, Illinois got one more chance until a huge Russ Washington sack ended the game.  Mizzou had faced a fired-up border rival, taken their best shot, and been outplayed a majority of the game; but the defense dominated when it counted, and they flat out stole the game from Illinois.  Mizzou moved to 2-0 on the season with a huge game out west against Gary Beban and UCLA on the horizon.

Next up: Mizzou takes on Hollywood.