With an offense bogged down by inconsistency, particularly from the quarterback position, Mizzou had ridden a stout defense and fourth-quarter heroics to a 4-1-1 record.  Would the offense finally get on track, or would reality finally catch up with Devine's Tigers?

(Bet on the latter.) 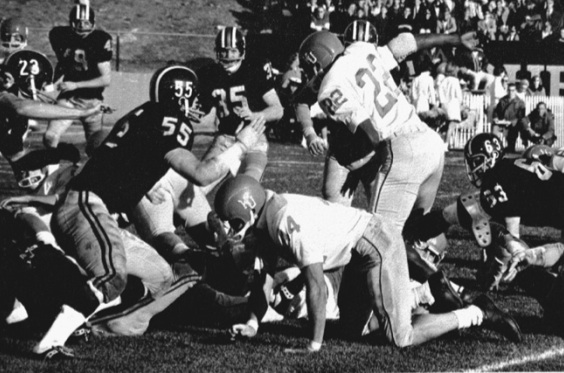 Sure, Mizzou stuffed KU, but would the game matter in the standings?

To this point in the 1966 season, Missouri had snuck by playing a lot of youth.  Sophomores were abound, particularly on the lines.  Meanwhile, injuries were beginning to take a toll on both Mizzou's depth and experience. Star defender Russ Washington had gotten hurt against OSU and would miss the trip, while strong lineman Bill Powell and fullback Barry Lischner were far from 100%.

In other words, it was a really bad time to go to Lincoln to play Bob Devaney's Huskers.  For the third straight year, NU had started 6-0. The week of the game, UCLA coach Tommy Prothro was asked if the top ten rankings were accurate as he saw the teams.  He responded that things were about right, except that Nebraska was probably closer to #49 than #9.  Thanks, Coach.  Combined with the memory of 1965's near-Mizzou upset, NU was certain to come out firing, and that's exactly what they did.

This one was decided in the trenches.  Mizzou's offensive line simply could not handle the Blackshirt line.  The Tigers held up as long as possible on D, allowing only four yards per carry.  Unfortunately, Nebraska was able to rush 68 times because Mizzou couldn't maintain possession of the ball.  The Tigers managed just 59 yards rushing on 37 attempts and completed just three passes to Tiger receivers and two to Husker defenders.  They also fumbled three times.

In the last five seasons, Mizzou hadn't lost by more than 13 points.  In other words, a blowout like what happened on October 29 was the rarest of rare occurrences.  When the Huskers scored their final touchdown early in the fourth quarter, Mizzou had given up more points than they had since Dan Devine's first season and were victims of the biggest blowout in the MU-NU series since 1933.  It was a harsh welcome to reality for a young team showing signs of strain.

A week after getting thoroughly defeated by Nebraska, Missouri thoroughly defeated themselves.  In front of a Homecoming crowd of 56,500, the Tigers simply couldn't hold onto the ball.  Enjoying one of their best seasons in quite a while, Eddie Crowder's Buffs were certainly good enough to beat Missouri without help, but they naturally didn't turn the help down.

As I say often, it started well enough.  On their opening drive, Colorado fumbled at their 37.  Mizzou, led by quarterback Danny Sharp in his first start, couldn't move an inch, and Bill Bates missed a 37-yard field goal.  Mizzou then muffed back-to-back punts, one by Jim Whitaker, the other by Roger Wehrli and handed the Buffs a 10-0 lead.

Colorado kicked off...and Earl Denny fumbled.  Five plays later, it was 13-0.  It remained that way at halftime.  The Buff defense had done well against the Mizzou offense, but the Tigers had handed the Buffs 13 points with special teams miscues (16 if you include Bates's missed field goal).

Known for good reason as a second-half team, Mizzou responded in kind, forcing a quick Colorado punt and quickly driving to the Colorado 3, where they faced a fourth-and-one.  Down 13 and needing a large spark, Dan Devine elected to go for it.  The ball went to Denny...who was thrown for a 1-yard loss.  Colorado quickly punted, however, and Mizzou was driving again.  Again they faced fourth-and-one deep in Buff territory.  This time Sharp rolled and threw for Chuck Weber...but Ike Howard made a leaping interception and returned it 99 yards for a touchdown.  Inches from being down only 13-7, Mizzou was now down 19-0 after a blocked PAT.

Midway through the fourth quarter, CU picked off yet another pass in their own territory and drove methodically for the final score.  Mizzou ended up outgaining Colorado, 228-205, and won the field position battle for all of the second half; meanwhile, Colorado actually went 0-for-5 passing for the game.  But a ridiculous SEVEN turnovers literally handed the game to the Buffs.

Suddenly Mizzou was reeling. They were just 4-3-1 overall and just 2-2 in conference play, good for fifth place.  Any hope of salvaging a winning season rested on winning the next week.  In Norman.

What do you do when your offense's worst enemy is itself?  When you've got a shaky quarterback situation to boot?  Simplify!  Against an Oklahoma team coached by Jim Mackenzie, Frank Broyles's former chief defense assistant at both Missouri and Arkansas*, Mizzou had one offensive goal: don't get in its own way.  Run, punt, run punt.  No risks, no passes.

Mackenzie had begun to engineer a nice turnaround season at OU.  He was hired after OU fired Gomer Jones after just two seasons that saw the Sooners go just 9-11-1.  In 1966, Oklahoma certainly wasn't the Oklahoma of the 1950s or 1970s, but they were fast and hungry.  Unfortunately, Mackenzie never got to complete the turnaround--he died of a heart attack the following February, after the age of just 37.

Damned if it didn't work.  Against a fast, attacking defense--probably the fastest Mizzou had faced since UCLA--Mizzou rushed for 212 yards (and passed for 0), much higher than the 149 they had been averaging for the season, and combined with a swarming defense of their own, they once against dominated the field position battle.

For once, though, this one did not start well enough.  Shaky after losing the last eight quarters by a combined 61-0, Missouri fumbled four times in the first half, losing two.  Danny Sharp also threw a pick in his only pass of the game.  However, OU gave the Tigers life with two turnovers of their own, and the first half ended at 0-0.

Early in the second half, Mizzou would finally strike.  Backup fullback Mike Ewing, of all people, raced 49 yards to the OU 25.  Bob Powell scored from four yards out to cap a 5-play, 74-yard touchdown drive, Mizzou's first in over ten quarters.  After a Rich Bersen interception near midfield, Mizzou could not advance the ball much, and Dan Devine sent Bill Bates onto the field for a 52-yard field goal.  Did he have the leg?  Would the gamble backfire and set OU up near midfield?

Bang.  Bates's boot, the longest in Mizzou history at the time, gave Mizzou a shocking 10-0 lead midway through the third quarter.

OU would respond, however.  Riding a series of misdirection plays, the Sooners would orchestrate a nine-play touchdown drive, with quarterback Bob Warmack scoring from ten yards out.  Mizzou's lead was suddenly precarious at just 10-7.  Mizzou followed with an untimely three-and-out, but Bates, who had been pinning OU deep all day, boomed a punt that was mishandled by Eddie Hinton.  Mizzou drove to the OU 1 before a Ray Thorpe fumble, but OU couldn't move the ball again.  Thanks to the run (Charlie Brown had 93 yards, Ewing 72), the pass defense (Jim Whitaker nabbed two of Mizzou's three INTs), and Bill Bates's leg, Mizzou had salvaged their season and clinched a winning record.  Plus, they had managed to move from fifth to third in the standings.  Nowadays that would mean a move from the Independence Bowl to the Holiday Bowl!

As the chartered Ozark plane brought back the Tigers to a buoyant crowd at Columbia, Dan Devine's cute 9-year-old tomboy kissed the coach and then drew a chuckle from him when she said, gravely: 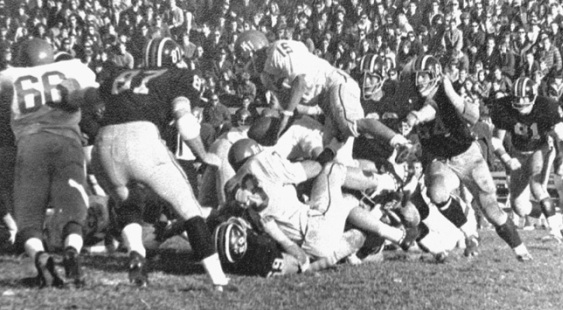 With a winning season clinched, Mizzou welcomed Kansas to town with only two goals: 1) to beat Kansas (need more motivation than that?), and 2) beat Kansas badly enough to make them attractive to the Liberty Bowl.  The Jayhawks were once again struggling.  They weren't very good before star quarterback Bob Skahan was lost for the season a few weeks earlier, but they were hopeless afterward.  Since winning at Minnesota to go 2-1, KU had gone 0-6-1, with only a 3-3 tie to even-more-hopeless Kansas State preventing a 7-game losing streak.

On the same day as one of the most famous ties in football history, Mizzou and Kansas played...well, a less-exciting game in front of 53,200 on senior day.  The teams combined for one scoring opportunity in the first half, but Bill Bates came up short on a 37-yard field goal.

In their previous 14 quarters, Mizzou had managed only 10 points--all in the third quarter against Oklahoma.  Q3 was the Tigers' best once again--Mizzou took the second-half kickoff and drove 79 yards in just eight plays.  After a series of successful runs sucked the Jayhawks close to the line of scrimmage, Gary Kombrink found Earl Denny deep for a 54-yard touchdown.  It was a poetic ending to Denny's career--he had begun it in 1964 with a 90-yard touchdown in the opener against California.

Kansas responded by driving to the Mizzou 9 and started the fourth quarter with a 1st-and-goal.  But Mizzou stuffed them three straight plays, sophomore Bill Schmitt blocked a field goal attempt, and that was the only chance Kansas got. Once again, one touchdown was all Mizzou needed and the Tigers' fourteen seniors went out a winner.  Mizzou was not selected for a bowl, but there's nothing saying they'd have accepted a bid anyway.  Under Devine, Mizzou had turned down three of seven invitations. 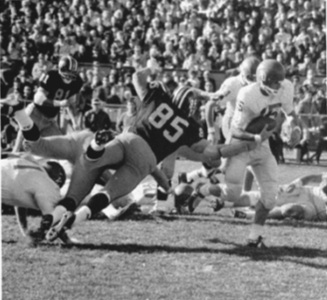 In all, 1966 went about as well as could be expected with as much talent as had departed after 1965.  A 6-3-1 season in 1966 would be like 8-4 or 9-3 today--just basically add two gimme non-conference wins and flip a coin to determine the winner of the tie.  Pretty good for a rebuilding effort (pretty sure most of us would accept 8-4 or 9-3 for 2009, no questions asked), especially one that resulted in just 12.1 points per game.  The blowout losses to Nebraska and Colorado were disturbing--and resulted in Mizzou only outscoring opponents by five points for the season--but led by a defense that only gave up one touchdown in the final eight quarters of the season, Mizzou finished strong and offered quite a bit of hope for 1967.

Youth was dominant for Mizzou in 1966, but in '67 they would still need to replace some key cogs, including tackle Bill Powell, running backs Charlie Brown and Earl Denny and defensive backs Jim Whitaker and Gary Grossnickle.  Plus, star kicker Bill Bates had played his last game in a Mizzou jersey as well.  That said, stars like Russ Washington and Roger Wehrli were major components of what looked to be another stellar defense.

Offense, on the other hand, faced more question marks.  Gary Kombrink and Danny Sharp would both return at quarterback, but without Brown and Denny the running back position was uncertain.  Chuck Weber would return at wideout.  Mizzou would begin 1967 with a visit from 1967 Cotton Bowl participant SMU and would go on to host Nebraska and a resurgent Oklahoma program.