We are just hours away from the first pitch of the WCWS and this is the team Mizzou will be taking on in Game 2 this afternoon.  We have already covered the two teams could play depending on the outcome today in Georgia and Washington.  Let's finally get to the real good stuff here and look at the #10 Arizona State Sun Devils

Overall, ASU finished the regular season at 40-16 with a 10-11 record in the Pac-10 conference, which was good enough for sixth place overall (behind UCLA, Washington, Arizona, Stanford and Cal).  They went a ridiculous 30-6 at home (plus going another 6-1 in the NCAA's for a total of 43 home games), 4-6 on the road and 6-4 at neutral sites.  Their RPI is 11th per Warren Nolan RPI .(which has been updated to include all the action of the tournament it appears)  They run-ruled 16 opponents on the season, were run-ruled three times themselves and played in one extra inning game (the first of the season), which they won.

ASU in the Tournament Thus Far:

The Sun Devils got to host their own regional as the #10 seed, but all did not start too well for them.  After an initial win 5-0 over San Diego State, they got run-ruled by LSU and had to work from the loser's bracket.  They took down Fullerton 7-0 before having to beat LSU in two games, which they did by the scores of 6-4 and then 5-0.  Moving on to the Super Regional, ASU benefitted from Oklahoma being absolutely awful and North Dakota State moving on.  ASU took them down with ease at 3-0 and then 11-0 in only 5 innings.  All of these games were at home in Tempe.

ASU played a decent schedule (not including their own conference schedule), but they certainly did take their time warming up to it.  They went 11-1 in their first 12 games, all at home, but not really against the top schools.  Competition took a big upturn when they went to the Palm Springs Tournament where they beat #22 Northwestern and #30 Texas while falling to #1 Florida, #9 OU and #23 UMASS.  The road would give them another big tourney in Fullerton where they fared better with wins over teams such as #18 Depaul, #25 Notre Dame and #37 Nebraska while only falling to #6 Michigan.  Overall, the Sun Devils went 30-5 to keep their #2 national ranking around the top 10.

You read that correctly before the jump.  Arizona State went only 10-11 in conference.  Granted, they were taking on teams like #2 UCLA, #7 Arizona, #10 Stanford and #26 Cal, all of which placed in front of ASU.  The Sun Devils even won their first four, including a win over UCLA.  However, they would only go 3-10 through the middle of their conference season to play their way out of the title race.  They got the ship righted somewhat, winning three of their last four, but still dropping a game to an Oregon State team which only won four conference games all season.

One thing about this half of the WCWS is that it is loaded with TOP talent from around the country.  All ASU has is one of the finalists for player of the year in CF Kaitlin Cochran (senior).  Hitting in the two-slot, Cochran led the team with a .422 average, scoring 67 runs on 62 hits and 63 walks.  She also clubbed 20 HR's with 59 RBI's.  She had a .905 slugging percentage and an other-worldly .615 OBP, while also stealing 17 bases.  Setting the stage for her in the lineup was LF Jessica Mapes (senior) who hit .400 and led the team with 74 hits.  Picking up some of the power slack was SS Katelyn Boyd (frosh) who hit 10 HR's and tied for the team lead in RBI's with 59.  Another big bat to watch out for belongs to DP Talor Haro (frosh) who hit just under .400 at .392 in limited action.  Ms. Haro would most like to be a professional snowboarder when she grows up, but also professes to be allergic to cold.  But hey...

ASU was pretty pedestrian in the field, where they committed 63 errors for a fielding percentage of 964 (.950 opposition).  They gave up 31 unearned runs on the season.  SS Katelyn Boyd (frosh) was the weak link in the field, accounting for 12 errors.

The ridiculous ace of the Sun Devils from last year ain't taking that mound any time soon.  Katie Burkhart went an amazing 41-5 with a 0.74 ERA last season, striking out 513 batters in 315.1 innings.  She has moved on to weiner dog tossing. 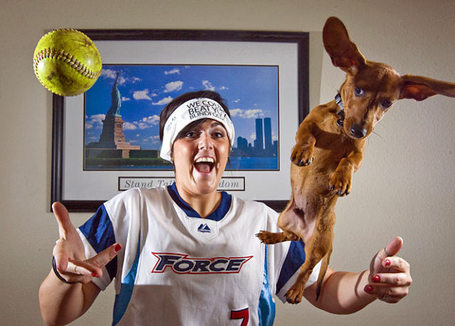 The team ERA has gone up almost two runs per game.  However, they are still pounding the ball all over the yard, even raising their team batting average just slightly over last season.  Bach has been on a roll of late, throwing four shutouts in her last five games.  However, it is clear this is a different team away from home, only going 10-10 away from the friendly confines of Farrington Stadium.  If there was one opponent who I would want the Tigers to get for their first game, ASU is it given the type of runs they give up and how average they are in the field.  If the Mizzou starter can do a good job of limiting the Devils at the plate, Mizzou should have enough offensive chances to win their initial contest.