UPDATE, 3:26pm - Per the Clarion-Ledger, Scott Bittle is unavailable for the Rebels this weekend, and Tim Jamieson is showing an EPIC set of juevos by holding Kyle Gibson for Saturday against (in theory) Ole Miss and starting Nick Tepesch tomorrow.  If Mizzou loses to WKU without Gibson, that move will get called into question (clearly), though technically that means that Saturday's is the more important game as well.

Today we move on to the #1 team and host of Mizzou's NCAA Baseball regional, the Rebels of Ole Miss.

Colonel Reb stopped by our tailgate back in aught-six...and no, this is not a picture from that tailgate...

Season: Ole Miss was an impressive 40-17 in 2009, going 24-8 at home and 20-10 in the SEC (and improvement from last year's 15-15), tying with LSU for the conference championship.  After winning four in a row to end the regular season, the Rebels quickly limped out of the SEC Tournament after losses to Georgia (6-3) and Florida (12-2).  They drew the nation's #11 overall seed and will host an NCAA Regional for the fifth time in six years.  This is a well-established baseball program.

The Rebels in recent NCAA Tourneys:  UM has PLENTY of NCAA experience.  Let's take a look at just the last five years.

In all, this is the Rebels' 13th trip to the NCAA Tournament.  They haven't missed a tourney since 2002.  They've been to Omaha four times, the last time being, surprisingly, 1972.

Non-Conference:  SEC teams don't really need to challenge themselves much in non-conference play, and Ole Miss really didn't.  They lost two of three (to Mercer and South Alabama) in the Coca-Cola Classic in Mobile to start the season, swept Central Arkansas, Arkansas State, Vermont, and Austin Peay at home, lost home games to TCU and SLU, and for the most part plowed through mid-weekers versus Southern Miss, UA-Pine Bluff, UA-Little Rock, etc.  In all, they were 20-7 in non-con play.

Defense:  The Rebels' .952 fielding percentage is second-best in the regional.  It's not amazing, but few in college baseball are.  And of course there are other tools than fielding % (range factor, etc.), but we don't exactly have those stats at our disposal.  We'll just say they're a decent defensive team.

In all, the bullpen is quite solid, with four main guys (including Bittle) having thrown 30+ innings with an ERA under 5.00 (three are under 4.00).

Fun Fact:  The Grove rules.  Just ask The Beef.  There's a fact for you.  If it were up to The Beef, Mizzou would play Ole Miss every year in football...all in Oxford.  With maybe a home-and-home with Memphis thrown into the mix. 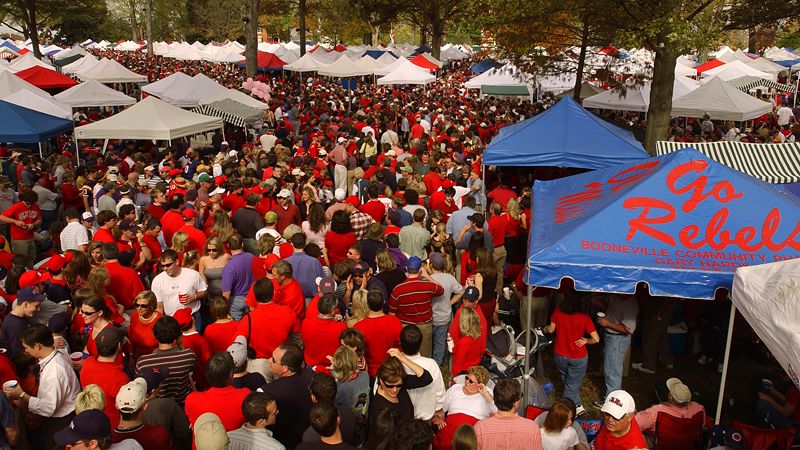 Overall Thoughts:  We know all the big national names in college baseball--Strasburg, Ackley, etc.  Ole Miss has none of them.  They just have a ton of different hitters who can beat you and a ton of different pitchers who can get you out.  Their strength is their depth, and they are built to win in an NCAA Regional format.  Hopefully Monmouth will take them down on Friday, obviously, but that's doubtful.  If Mizzou plays Ole Miss (preferrably in the winner's breacket), they will need a complete team effort to match that of the Rebs.