Share All sharing options for: 1978: Powers Starts Strong, and Don't Get in Wilder's Way (Part Three)

As the calendar turned to October, the schedule eased up on Missouri.  No more #1 teams, no more blazing heat.  The opportunity was presenting itself for Mizzou to make a move in the rankings. 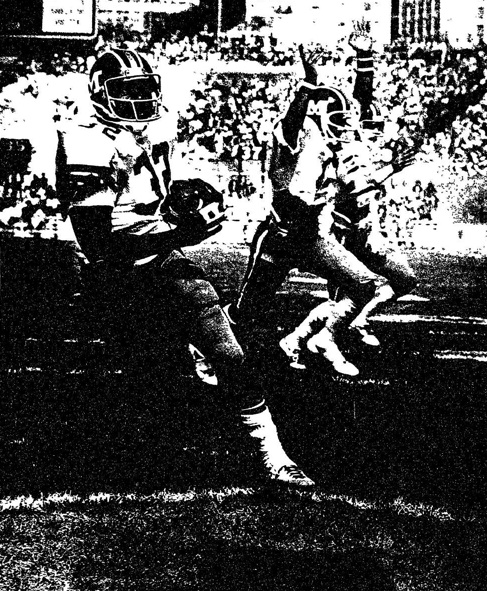 On a perfect October afternoon in Columbia, with the temperature in the low 60s and 60,000 fans in the stands at Memorial Stadium, Mizzou took the field against a team that a) had beaten them in back-to-back seasons and b) wasn't very good.  Missouri was out for revenge in this one, which helped to allay any fear of a letdown after the spectacle that was the Tigers' September schedule (and the thumping they had just taken in Norman).  Gary Moeller's Illini were coming off of a nice 28-14 win at Syracuse and had the confidence of knowing they'd beaten Mizzou last time they had traveled to Columbia and the belief that they could do it again.  But belief wasn't enough this time around.

Mizzou started the beatdown quickly.  A flawless first drive finished with James Wilder scoring untouched from a yard out.  Mizzou quickly took a 10-0 lead, and then it was time to stick in the dagger with the least-complicated pass pattern in the world: go long.  Seldom-used (and wonderfully-named) freshman WR Stevie Sly, possibly the fastest player on the team (we'll call him the Greg Bracey of his day), burned down the left sideline, and Phil Bradley hit him in stride.  17-0.

Leading 24-3 in the second half, Mizzou punished a hopeless Illinois offense.  The Illini fumbled five times (losing two) and threw two interceptions, one hitting Mizzou LB Chris Garlich in stride for an easy pick six.  After a short Gerry Ellis touchdown run, the scoring was capped by a 50-yard Bill Whitaker punt return.  Mizzou put up 26 first downs to Illinois' 9 and 429 yards to Illinois' 201.  Illinois punted eleven times to go with their four turnovers, and this one was a laugher. 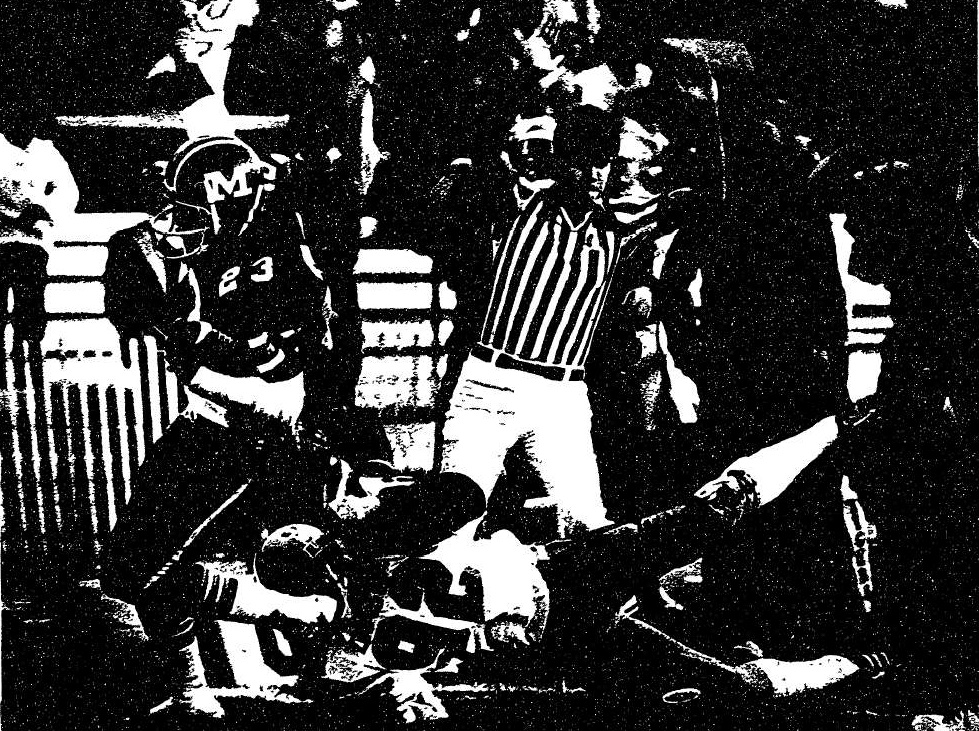 Next up came a different type of challenge.  Mizzou had already faced some of the game's all-time heavyweights in 1978--Notre Dame, Alabama, Oklahoma--but now an up-and-comer was visiting Columbia.  Iowa State was not known as a big-time football program by any means--from 1955-1969, Missouri went 14-0-1 against them--but they had become pretty adept at hiring good coaches.  Woody Hayes protege (and soon-to-be Ohio State head coach) Earle Bruce had taken over the Iowa State job when Johnny Majors left for Pittsburgh (quick show of hands: how many of you knew that either of those guys had coached the 'Clones?), and after a slow start to his tenure (three straight 4-7 seasons), ISU had gotten hot.  In back-to-back 8-win seasons, Iowa State had, among other things, managed to win two straight against Missouri for just the second time since 1933-34.

Iowa State was led on offense by a bouncy, dynamic running back by the name of Dexter Green and a strong offensive line.  They did not show much threat in the passing game, but they didn't have to.  Green and a rugged defense had made for a winning combination.  The defense was powered by Outland Trophy hopeful DT Mike Stensrud and the linebacking Boskey brothers, Tom (soon-to-be 1st-team All-Big 8) and Chris (soon-to-be Big 8 Defensive Newcomer of the Year).

On a cloudy October afternoon in Columbia, the 63,000 in attendance saw a physical contest, determined by big plays and big hits.  It started out looking like an offensive showdown.  On Missouri's first drive, Phil Bradley moved the Tigers 69 yards for a field goal.  ISU responded with a Dexter Green-centric touchdown drive to go up 7-3.  Mizzou came right back, marching away.  A 13-yard option keeper by Bradley put Mizzou up 9-7, but Jeff Brockhaus missed the PAT.

At this point, the Mizzou defense settled in, and thanks to a Larry Lauderdale interception and a long Brockhaus field goal, they took a 19-7 lead into halftime.

But then Mizzou got conservative.  The exciting offense of the first half disappeared, and ISU seized all momentum with a third-quarter blocked punt for a touchdown that made the score 19-13.  With under nine minutes left, ISU drove again.  They faced a third-and-six from the MU 11 when Earle Bruce got a little too fancy.  Green took the handoff and ran right, but pulled up for an across-the-field lob back to the quarterback, who was supposed to be wide open.  DE Wendell Ray, however, sniffed the play out and picked off the pass.

Mizzou's offense was still stagnant, however.  With under four minutes to go, Brockhaus (notice that he was punting now instead of Monte Montgomery) booted a 45-yard punt to 'Clone return man Tom Buck.  Buck eluded tacklers and broke into the open field, but deep snapper Paul Gadt separated him from the ball with an annihilating hit.  Mizzou recovered at the ISU 31, and an Earl Gant touchdown finally put the game out of reach.

Iowa State ended up outgaining the Tigers for the day, 384-331, but blocked punt aside, Mizzou made the big plays.  They were +5 on turnovers for the day, and ball control moved them to 4-2. 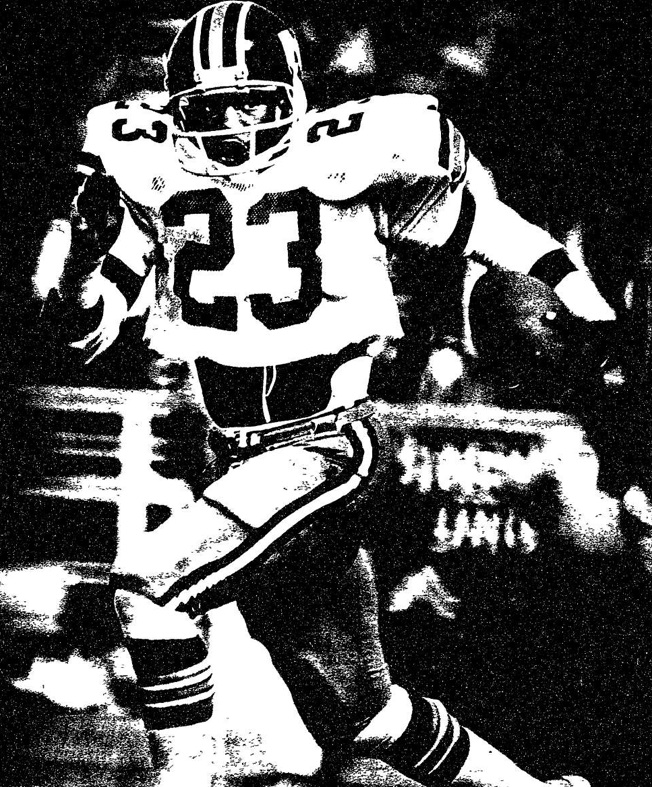 After a dogfight against ISU (and only a couple of breathers in their first six weeks of the season), Mizzou needed an easier game to recover.  What a great time to travel to Manhattan!  Jim Dickey was the latest to take on the K-State reclamation project, and to date the results were mixed.  Yes, KSU was putting up more passing yards in the conference thanks to Dickey's passing mindset and a decent QB in Dan Manucci, and yes, the Wildcats had already won as many games (2) in 1978 than they had in 1976-77 combined.  But with a shaky offensive line and defense, they were still a long way from being competitive against the big boys, and it quickly showed.

In other words, this one was over very quickly.

Homecoming 1978 saw an interesting matchup between a Mizzou team that was undefeated against teams not ranked #1 in the country and looking to lock down a bowl bid and stay in contention for their first Big 8 title since 1969, and a suddenly desperate Colorado team that had been creeping up the rankings before a shocking 24-20 loss to Oklahoma State and a humiliating 52-14 loss to Nebraska.  Buff coach Bill Mallory was suddenly on the hot seat despite leading Colorado an unlikely Orange Bowl bid (their first in fifteen years) just two seasons earlier.  Whether Buff alums were aiming a little too high for their program or not (they would go on to fire Mallory and embark on six straight losing seasons), the calls for Mallory's resignation had fired up the Buffs.

A huge game for both teams was made even more intense by a record crowd of 71,096 in attendance, and early on Mizzou responded positively to the moment.  After an early Phil Bradley fumble had led to a CU touchdown, the Mizzou offense drove 79 yards for a touchdown, capped by a perfect Bradley-to-Kellen Winslow pitch and catch.  Mizzou took a 14-7 lead into halftime and took control in the third quarter.  James Wilder took a simple screen pass and zig-zagged his way to a 60-yard touchdown.  The PAT snap was botched, but Mizzou still had a 20-7 lead.  Four minutes later, Gerry Ellis scored from two yards out, and Mizzou had a 27-7 lead.  They had their foot on Colorado's throat, and they were less than 20 minutes away from a 6-2 record, a potential Top 10 ranking, and good positioning for a big-time bowl game.

And then, their proverbial foot eased off the proverbial throat.  Colorado went into desperation mode, and things started to click.  QB Bill Solomon found Eddie Ford for a short touchdown, and it was 27-14.  Midway through the fourth quarter, Solomon hit tight end Greg Howard on three straight passes to set up a Solomon keeper, and suddenly it was 27-21.  The botched PAT attempt was suddenly looming large.

Stunned, Mizzou quickly had to punt, and a game that looked well in hand was suddenly in major danger.  With five minutes left, danger turned to crisis as Ford trotted in from 15 yards, and somehow Colorado was up 28-27.

Mizzou had plenty of time to salvage a win, however, and they moved the ball near midfield when they caught a break.  Earl Gant, Missouri's most proven tailback, wheeled into the Colorado secondary uncovered.  Bradley pounced on the missed coverage and hit Gant between the numbers at the Colorado 25...

...and Gant, sniffing the endzone, dropped it.  After the game, he said "I tried to run before I caught the ball.  Right when it hit my hands, I tried to go for the score."

All was not lost, however.  Bradley kept the drive moving, and Mizzou advanced to the CU 26, and with time running out, the field goal unit came onto the field to redeem itself for the missed PAT.  Two weeks earlier, Brockhaus had followed up a missed PAT with a 47-yard bomb.  This time, it was a 42-yard attempt for the win.

Not to be.  The snap was once again iffy, the hold was iffier, and the kick--which Brockhaus did well to get off in the first place--sailed well under the crossbar.  The 1978 season had been shaping up to be Missouri's best of the 1970s, but Mizzou fell asleep at the wheel, and a shocking collapse to a dead-in-the-water Buffalo squad threw everything into the air.

How often do you see a team suffer a shocking loss and then run off the rails?  About a million times, right?  Make it 1,000,001.  Mizzou said all the right things following the surprise loss to Colorado, but they were taking on an Oklahoma State team that had suddenly gotten hot.  After starting 0-5, the Cowboys had upset Colorado and thumped Kansas, then put a righteous scare into Nebraska the week before Mizzou traveled to Stillwater.  This still wasn't a great team, but this was the absolute worst time to play them.

It started well enough.  On their opening possession, Missouri easily marched down the field and scored on a 19-yard swing pass from Phil Bradley to Gerry Ellis, and a paranoid Mizzou fanbase was able to exhale for a moment.  Mizzou looked like they had come to play.

It was 7-7, though, when OSU gambled.  On fourth-and-1 for the 'Pokes on Mizzou's 15, OSU decided to go for it against a Mizzou defense that had repeatedly stuffed teams like Notre Dame in short-yardage situations.  The gamble worked--RB Worley Taylor went up the gut for 15 yards, and OSU was up 14-7.

Despite a non-existent running game and uncharacteristic mistakes, Mizzou stayed close.  OSU led 20-7 in the third quarter when Phil Bradley caught fire.  He found Lamont Downer for 66 yards, then scrambled in from the 3 to cut the deficit to 20-14.  Mizzou got the ball back, and Bradley completed three straight passes to move the Tigers into OSU territory.  However, a holding penalty knocked Mizzou backwards, and the drive stalled.  OSU got the ball back and was forced to punt, but sure-handed Mizzou punt returner Bill Whitaker not only fumbled, but fumbled inside the Missouri 5.

Here's where the game was decided.  OSU, still apparently determining whether or not they wanted to win the game, took the gift Missouri gave them on Whitaker's fumble and...fumbled right back.  The ball rolled into the endzone and went through the hands of almost every player on the field.  Officials unpiled a mass of humanity to find that OSU WR Mel Campbell had possession of the ball.  Touchdown, OSU.  28-14 (after a two-point conversion).  Ballgame.

Both teams put up another touchdown, but it was all academic.  OSU hadn't overpowered Missouri or tricked them in any way--they just lined up and beat the Tigers.  Mizzou's bowl hopes were not only on life support, but in a full-fledged coma.  They would have to pull something special in their final two games to salvage their first bowl bid since 1973.