Yesterday, we read as Frank Broyles was picked over Bob Devaney and a host of Missouri assistants, inherited an unathletic team, and maneuvered through the first two games of the season without a loss.  What would happen when Bear Bryant came to town?

In two games, Missouri had scored six touchdowns and come out with a win and a tie by focusing on power, field position, timely plays, and good, old-fashioned strategery.  Against Bear Bryant's Texas A&M Aggies, however, they would need something more than moxie and quick-kicking.  The Aggies had as much or more power (led by All-American lineman Charlie Krueger) and great coaching, and they also had speed to burn.  John David Crow was ATM's main horse, winning the Heisman after rushing for 500+ yards and intercepting five passes.  But he might not have even been the Aggies' biggest big-play threat--that honor may have gone to Bobby Joe Conrad (both of these players: GREAT 1950s Texas names), who would go on to lead the NFL in receptions in 1963.

Regardless, Missouri was overmatched, and Broyles knew it.  Hell, even Bear Bryant knew it.  According to Bob Broeg, the coaches met before the game, and Bryant told Broyles, "I don't see a single athlete on your end of the field, Frank."

It would be a great story to say that Broyles' Davids stood up to Bryant's Goliaths that day, but they very much did not.  In a reality check game after a decent start to the season, ATM was simply too big, strong, and fast for Mizzou.  With an exciting offense and a merciless defense (they would shut out four of their first six opponents and never again allow double-digit scoring after the first week of the season), the Aggies would move to #1 in the country by November and were well-positioned for a national title, but as rumors (soon-to-be-truth) swirled around Bear Bryant and his potential departure to Alabama, ATM lost both focus and their last three games of the season.  Either way, they were a killing machine in September, and Missouri made the mistake of getting in their way.

The only thing that could slow down John David Crow in 1957 was a nagging injury.

Following ATM's romp over Mizzou, the Tigers had no time to recover.  They had to make their way to Dallas to face SMU, who had beaten Mizzou eight straight years since a dramatic Mizzou win over Doak Walker's Mustangs in 1948.  SMU was no longer as good as they had been in the Walker years.  They had not been to a bowl game since the 1949 Cotton Bowl, never winning more than six games in a season in that span.  Of course, that hadn't stopped them from beating Missouri every year, plus this was clearly a talented team, particularly on offense.  Dandy Don Meredith--who would go on to become an All-American in 1958 and 1959--was the sophomore slinger for SMU, throwing to Willard Dewveall, who would be drafted in the second round of the 1958 NFL Draft.  Though they would only go 4-5-1 in 1957, they did manage to defeat decent Texas and Arkansas teams.

They did not defeat Missouri, however.  Once again riding the quick kick and a stiff defense, Mizzou took a 7-6 lead in front of 26,500 at the Cotton Bowl, and then held on for dear life.  Late in the game, SMU advanced deep into Mizzou territory, facing a 2nd-and-goal from the Mizzou 1.  Mizzou held.  Third-and-goal.  Mizzou held.  Fourth-and-goal, game on the line...SMU halfback Frank Smith ran left and found a hole, but backup DB Don Mason met him one-on-one and prevented the touchdown.  Mizzou held on by the skin of its teeth, and moved to 2-1-1.

After a reasonably successful trip through their non-conference season, it was time for Mizzou to start Big 7 (yes, 7) conference play with an always tricky bus ride to Ames. Since a stretch from 1935 to 1950, when Missouri went 12-1-3 against Iowa State, the Tigers had fought to a stalemate with the Cyclones in the 1950s.  While they had still gone 3-0-1 at home against ISU, they had lost in three consecutive trips to Ames.  That streak ended with Broyles' first trip north in black and gold.  Mizzou's offense clicked once again, and Mizzou was 1-0 in conference.

The 1957 season (and really, the 1950s as a whole) represented potentially the lowest point in Nebraska football history.  Bill Jennings was in his first year as head coach, in what would be a terribly unsuccessful 5-year tenure (the only highlight: ending OU's 74-game conference winning streak with an upset in 1959).  NU had no historically memorable players, and while they came to Columbia 1-0 in conference (they had beaten Kansas State, 14-7, three weeks previous), they would not win a game the rest of the season.

As far as the game itself, I'll let Mutigers.com tackle the most memorable feature:

Oct. 25, 1957 - A group of pranksters changed the rock "M" to an "N" the night before the Missouri-Nebraska game. But the Mizzou groundskeeper, with the help of some young boys who gained free admission to the game in exchange for their assistance, restored the "M" to its proper form before kickoff. The next day, Missouri used a last-minute touchdown to post a come-from-behind 14-13 win over the Huskers.

Hopefully I'll have more resources in the future to help describe what was clearly a pretty tense, exciting game, but for now that will do.  Heading into November, Missouri was now 4-1-1, and more importantly 2-0 in conference.  If they could survive the next two games undefeated, they would be in the driver's seat for an Orange Bowl bid.

Before Dallas Ward accepted the Colorado head coaching job in 1948, CU was a minor program.  As part of the Mountain States Conference (along with teams like Colorado State, Utah, Utah State, Wyoming, BYU, and Denver), the Buffs had had some successful seasons, even making a lone bowl appearance in the 1938 Cotton Bowl (a 28-14 loss to Rice), but they took the big leap in '48, making the Big 6 Conference the Big 7.  Under Ward, a longtime assistant at Minnesota, the Buffs made the slow climb toward respectability.  They went just 5-11 in their first three Big 6 seasons but began to break through in 1951, winning 7, 6, 6, 7, and 6 games in respective seasons and entering the big-time with a 1956 Orange Bowl bid.

Ward's 1957 Buffaloes easily one of the most talented CU squads ever.  Future Green Bay star WR Boyd Dowler was the quarterback, while other pro talent like RB Bob Stransky (a 2nd-round NFL pick in 1958), Eddie Dove (future star defensive back and punt returner for the 49ers), and John Wooten (future lineman for the Redskins and Browns) rounded out an impressive lineup.  How impressive?  The previous week, they had traveled to Norman and given OU a major scare--their 14-13 loss to the Sooners was the first time a visiting team had come within one possession of winning in Norman since TCU came within 21-16 in early 1954.  In all, CU was in essence five points from being undefeated when Mizzou came to town--they had lost to OU by 1, KU by 1, and tied Washington.

A confident Mizzou squad came to Boulder intimidated by neither the talented Buffs, the overflow crowd of 41,000, the wet snow/drizzle, nor the presence of a live buffalo on the sideline for the first time.  But before we get to how the game played out, let's take a quick detour into what (according to Bob Broeg) Frank Broyles thought about statistics:

"Statistics are for losers," Broyles would proclaim, prattling from the book of defense over offense, field position over possession, and all aspects of the kicking game, most certainly the quick kick.

Well, then.  While that statement, for very obvious reasons, cuts me to the core, the benefit of the philosophy--a grave necessity for the coach of a beefy but outgunned, not-athletic-enough squad--was never more clearly illustrated than in Boulder on November 2, 1957.  In less than ideal conditions, against a team whose confidence had risen considerably after a close loss to the best of the best, Missouri proceeded to get outgained by almost 300%, 329-123.  But thanks to Bob Haas' quick kicks, they dominated the field position battle, and with Colorado clinging to an early 6-0 lead, eventually all-conference back Hank Kuhlmann scored to even things up, and Charlie Rash's PAT put Mizzou ahead by one.

Mizzou continued to leverage the field in their favor, and after pinning the Buffs deep with another nice kick, Bob Lee blocked a Boyd Dowler punt for a safety, giving Mizzou a 9-6 lead.  They would hold on and pull out an unlikely 3-point win.

Two days after the big win, Missouri appeared in the AP Poll for the first time since the 1950 preseason.  Broyles's 5-1-1 Tigers were the new #19 team in the country.  And not only that...but undefeated Oklahoma was coming to town the next week with the Orange Bowl on the line.  It would be the biggest game in Columbia since at least 1949 (when OU came to town) or maybe 1948 (when MU went to Norman).  Columbia was ready to rock. 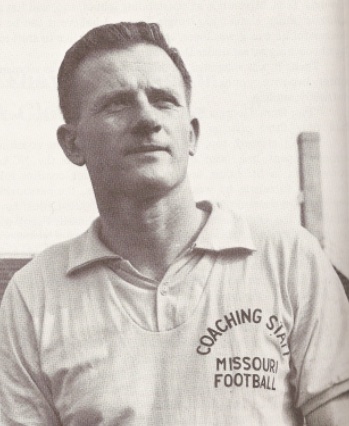 That's right, I really don't have any other pics to work with here.

Next up: reality bites.