Share All sharing options for: 1985: The Wagon De-Rails (Part Two)

There is no bigger sign of foreboding than losing at home to Northwestern.  At least that was the case in the mid-1980s.  Granted, the Wildcats appeared to have a bit of a feisty offense, and granted, the Mizzou offense had shown signs of life after a comatose first quarter-and-a-half to the season.  But still...it's hard to draw any optimism for the remaining ten games when you start with a home loss to Northwestern. 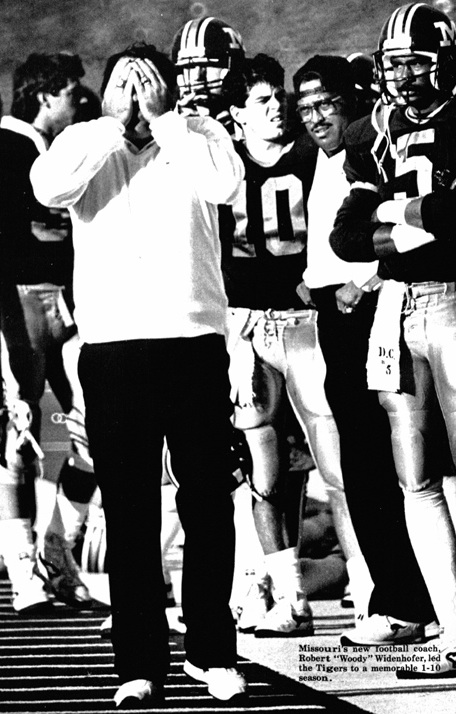 Texas in the mid-1980s wasn't the "Texas" we've come to know.  After posting a 30-5-1 record from 1981-83, they had faded in 1984, losing four of five (including a 55-17 by Iowa in the Freedom Bowl) after a 6-0-1 start.  Looking to atone for their unexpected fade into bolivian, the Longhorns began 1985 with a visit from Woody's Tigers.  At quarterback for the Longhorns was a now-familiar name: senior Todd Dodge (yes, that Todd Dodge), who was locked in a heated QB battle with junior Bret Stafford.

In the end, Mizzou did a wonderful job of keeping this one close considering how many walk-ons and backups ended up playing.  Late in the first quarter, Marlon Adler was sacked and left the game with a sprained back.  Warren Seitz took over at QB, and since Seitz was becoming one of Mizzou's better receivers, that meant an absence had to be filled there too.  It also meant that Tom Whelihan had to take over at punter, as Adler was the starter there too.  A couple of plays later, senior receiver Adrian McBride broke his collarbone and was lost for the season.  Suddenly a thin receiving corps was just about destitute. 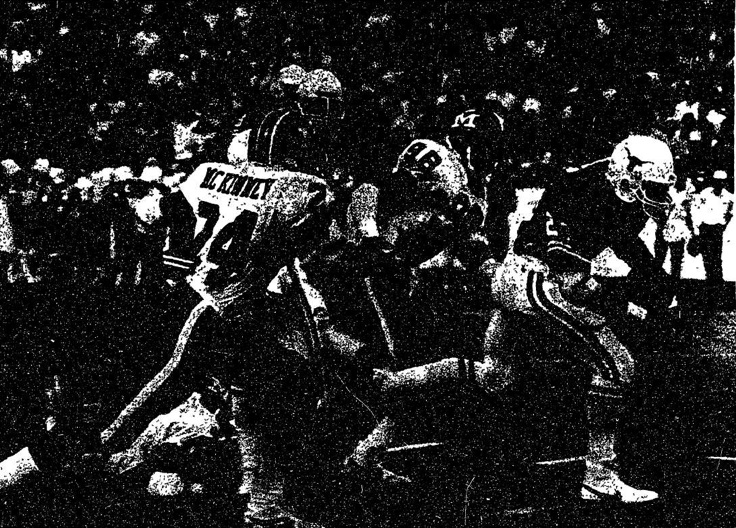 UT's Charles Hunter breaks through for the first score

But the backups stepped up their game.  Herbert "Junebug" Johnson caught six passes for 104 yards.  Meanwhile, stepping in for Adler, Seitz found 5'9 walk-on Craig Lammers for a 33-yard touchdown to tie the game at 7-7.  Texas took a 14-7 lead into halftime (it could have been worse, but Mizzou had stopped UT on a fourth-and-one, UT had missed a field goal, and walk-on DB Vince Keil intercepted Dodge), and the lead grew to 21-7 before Mizzou rallied late once again.

After Texas muffed a punt, Seitz sprinted up the middle for a 16-yard touchdown with 9:21 left in the third quarter.  The Longhorns fumbled again, and Darrell Wallace broke into the open for what looked like the game-tying touchdown, but he was stripped and the ball rolled out the back of the endzone.  After another missed field goal by UT, Whelihan booted a big-time 53-yarder to cut the lead to 21-17 with 5:13 left.  Mizzou needed one more stop to try to steal the win, but they didn't get it.  Over 11 plays and a few first downs, UT managed to run out the clock and hold on.

It was a little early in the season for moral victories, but hanging with Texas after a series of injuries was at least a bit encouraging.  And even if Adler was to miss a decent amount of time, Seitz had proven himself capable once again, and Whelihan was fine at punter.

An 0-2 start is certainly not cause for optimism, but all was not lost at this point in the season.  Mizzou had shown fight in Austin, and again, there was talent on this team.  The major problems heading into Week 3 were an iffy offensive line giving up too many shots on the quarterback (14 sacks through the first two games), a patchwork receiving corps stocked with walk-ons, freshmen, and converted quarterbacks, and a young secondary that was searching for healthy, reliable corners.  Against an Indiana squad that was 2-0 after an 0-11 season in 1984, surely there would be a chance to hit the reset button on the 1985 season and start winning, right?  Maybe?

With Marlon Adler back at quarterback, an energized Mizzou kicked a field goal on a run-heavy first drive of the game, and Mizzou took a 3-0 lead.  It was 10-0 with three minutes left in the first half when Mizzou gave up the first of many big plays, this one a 68-yard touchdown pass from Steve Bradley to Ken Allen.  A halftime lead of 10-7 disintegrated quickly when Indiana scored just two minutes into the second half, and after that, as Woody Widenhofer suggested, "We just folded up the tents."  Despite Darrell Wallace putting up career numbers (21 carries, 117 yards), the Mizzou offense could not reliably move the ball, and an already-bad pass defense fell apart.  Bradley passed for 265 yards and 3 TDs, and a 10-0 Mizzou lead turned into a 29-10 deficit.  Adler found Junebug Johnson for a late touchdown (Junebug had 7 catches for 103 yards), but it was too little, too late.  While he had a pretty athletic team at his disposal, after the first true blowout loss of the season (coming in a game that Mizzou led at halftime, no less) Woody was quickly realizing that he had a full-fledged rebuilding project on his hands.

If I were a Mizzou student in 1985, I'd have still been trying to talk myself into both the 1985 team and the Widenhofer era at this point.  I mean, they'd had dumb luck with injuries, right?  And two of their three losses were by four points, right?  And hey, it's not like Cal's any good (just 3-12 since the start of the 1984 season), right?  Plenty of winnable games remained on the schedule, and while a bowl game wasn't a possibility, wins were still there for the taking.

It was Homecoming at Ol' Mizzou, and spirits were high.  Harold "Spider" Burke was the Grand Marshal of the parade, a new mall was opening on the northwest corner of town, and it was time for Mizzou to bag up some wins.  The Mizzou offense obliged with a breakout performance from Darrell Wallace (25 carries, 196 yards, 1 TD), a decent line from Marlon Adler (116 yards rushing, 133 yards passing), another solid effort from Junebug Johnson (6 catches, 74 yards), a season-high 512 yards of offense, and a career-best four field goals from Tom Whelihan.  Unfortunately, a bad defense found ways to get worse. 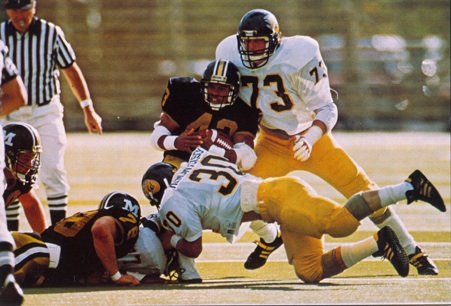 One of the few times Cal managed to wrap up Darrell Wallace.

As always, it seems, things started well enough.  Just 95 seconds into the game, Wallace scored from 12 yards out to put Mizzou up, 6-0 (the PAT was blocked).  After Whelihan's first field goal, Steve Vandegrift blocked a Cal punt, and Vernon Boyd scored early in the second quarter to put Mizzou up, 15-0.  Of course, it didn't last.  The Golden Bear offense woke up.  A couple of quick Cal scores, sandwiching another Whelihan field goal, made the score 18-13.  Whelihan kicked another field goal with just 0:45 left in the half, but a Mizzou personal foul on the ensuing kickoff gave Cal a chance to drive.  On the final play of the half, Cal QB Kevin Brown found freshman halfback Marc Hicks for an unlikely 33-yard score, and Mizzou's lead had frittered away to just 21-19 at half.

Predictably, Cal quickly took the lead in the second half, with a 5-play, 1-minute touchdown drive.  Two Tiger miscues on Cal punts (a ball hit a Tiger blocked on one punt and was recovered by Cal, then Craig Lammers muffed the next punt) led to Bear field goals, and Cal led 32-24.  With four minutes left, Mizzou struck back.  Eric Drain scored from a yard out to cap a 14-play drive, and Adler's 2-point conversion tied the game.  But just two minutes later, Cal had marched 71 yards.  Hicks plunged in for the go-ahead touchdown.  A last-ditch effort from the Mizzou offense failed--Adler overthrew Warren Seitz and was intercepted--and a porous Mizzou defense had given away another game.

How quickly things can fall apart for a program.  Less than 24 months earlier, Mizzou had found themselves in the Holiday Bowl, for their fifth bowl game in six seasons, and their six straight season with a winning record.  Now, they stood with the longest winless streak in Division I.  Their last win had come nine long games earlier, when they had throttled Kansas State, 61-21.  A relatively easy schedule had resulted in an 0-4 start, and now the Big 8's big boys started popping up on the schedule.

You see it happen often.  A team manages to stay competitive for the most part but can never cross over into win territory...and eventually they fall apart.  Against a Colorado team that was surging to its best season in almost a decade, that's exactly what happened.

Mark Hatcher, the Buffaloes' sophomore quarterback, was a Wishbone ace against the Tiger defense in Boulder.  He rushed 25 times for 151 yards and three touchdowns; meanwhile, he attempted just six passes, but he completed three of them for 110 yards an another TD.  A 71-yard touchdown pass on the game's second play set the tone, and the Buffs were up 24-0 at halftime.  Darrell Wallace sprained his ankle in a 95-yard performance, Marlon Adler pulled a thigh muscle, Mizzou gave up 505 yards (while gaining just 289 themselves), and...yeah, there's not much reason to go into detail on this one.  Twelve months earlier, Mizzou had beaten Colorado, 52-7.  The 76-point turnaround in scoring margin tells you all you need to know about how quickly Mizzou had fallen.

At 0-5, it was time for Woody Widenhofer to start looking toward the future--1985 was a lost cause.