Share All sharing options for: 1958: The Fussbudget Arrives (Part Two)

In Part One, Dan Devine took over a team that had experience and talent, but not much experienced talent.  Athletic guys like Danny LaRose and Norris Stevenson were developing, but they were just sophomores.  Mizzou faltered near the goal line and opened the season with a loss to Vanderbilt, then they needed a fourth-quarter touchdown to eek out a win versus lowly Idaho.  The team had a long way to go, and things would get worse before they would get better. 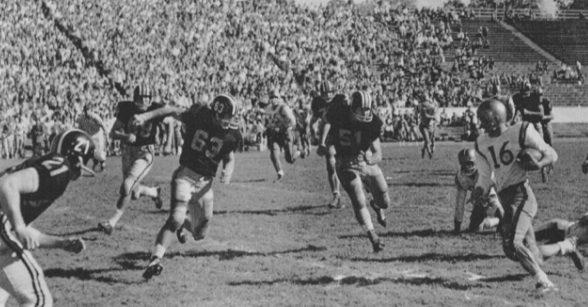 The Mizzou D in pursuit.  Most of the early troubles in 1958 were due to the offense--the defense did its job, as it usually did in the Devine Era.

Next up for Mizzou was a trip to College Station.  The previous year, Bear Bryant's Aggies had whooped Frank Broyles's Tigers, 28-0.  The Aggies spent a good portion of the season at or near the top of the polls but faltered late amid rumors that Bryant was a favorite for the Alabama job.  Sure enough, Bryant took his dream job, and in 1958 it was up to Jim Myers to follow the soon-to-be legend.  Myers came to College Station via Ames; a General Robert Neyland disciple, he had taken the Iowa State job before the 1957 season, and after a 4-5-1 go-round, he was snatched up by Texas A&M.

The season hadn't started quite the way Myers had hoped.  ATM had begun the season in the preseason Top 20 but immediately fell out after a tight loss to Texas Tech (15-14) in Dallas and a road walloping at the hands of Houston (39-0).

In need of a confidence boost in their home opener, the Aggies started strong against a banged-up Mizzou team--the first two games had not been kind to the Tigers in terms of staying healthy.  By the end of this game, Norris Stevenson, Hank Kuhlmann, Donnie Smith, and Roger McCoy would all be knocked out with various ailments.

ATM scored on their first drive of the game, but Mizzou responded.  They drove the length of the field, but once again they could not execute in the red zone.  ATM held at the one-foot line and maintained the lead.  Later in the game, Mizzou drives would stall at the four-, eight-, and 12-yard lines.  Hard to win when you blow four chances, eh?

Eventually, ATM applied the dagger with another score, and Mizzou returned home with another hard-to-swallow loss.  The Aggies would go on to finish just 4-6 overall; Myers's tenure in College Station would last four unsuccessful seasons--ATM went just 12-24-4 before he was let go.  He would end up coaching for Tom Landry and the Dallas Cowboys, eventually working his way up to Offensive Coordinator and Associate Head Coach.

As frustrating as the game was, the rest of the Tigers' stay in College Station was even more frustrating.  The world was a rather frustrating place in the late-1950s, especially in terms of race.  From Dan Devine's Simply Devine, talking about Mizzou's postgame dinner excursion:

The team bus had parked near some A&M campus hangouts and restaurants, and the players had gone off on their own.  I was still on the bus, replaying the problems from the game in my mind.

Our two captains, Don Chadwick and Charlie Rash, interrupted me by charging back onto the bus.  "Coach, they aren't serving the black players," one of them said.  The news surprised me, and I said, "I beg your pardon?"

They repeated what was happening, and I asked what they thought we should do.  Both Don and Charlie said, "The white players don't want to eat."

I said, "OK, go get everybody and let's get back onto the bus."  I was shocked that this kind of prejudice was still taking place.  I broke down and cried, believing I had let my team down.  I prided myself on preparation, every detail, and even though we had lost the game, having our players run into problems like this was far worse than losing a football game.  I should have known this was a possibility and been prepared for it.  I vowed to never again let something like this happen to my team.

It was a tribute to both Devine and the players on the team that they would stand up for each other and rally around each other.  That would come in handy later in the season.  But first up was one more (on-the-field) setback. 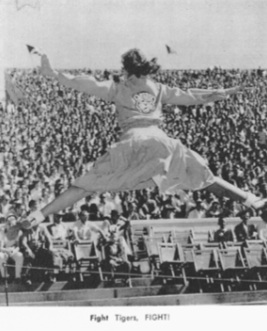 There was little to cheer about early on in 1958.  That would change.

After an annoying trip to College Station, Devine's men returned home to face potentially an even bigger challenge.  SMU was the rare winless-after-two-weeks-but-ranked team, having lost only to Ohio State (23-20) and Notre Dame (14-6) to start the season.  Needless to say, losing by a combined 11 points to those two teams did not mean you were a shabby opponent.  That said, Mizzou treated them like a shabby opponent early.  In front of 29,000 fans at Memorial Stadium, the Tigers jumped out to an early lead on the strength of two touchdown passes by quarterback Bobby Haas (in for Phil Snowden).  That, combined with sturdy running from Mel West (in for Norris Stevenson and Hank Kuhlmann--I told you there were a ton of injuries), gave Mizzou a seemingly insurmountable 19-0 halftime lead.  Mizzou looked so good in the first half...

...and so tired in the second.  SMU quarterback Don Meredith's arm applied constant pressure to the Mizzou defense, particularly the super-young Mizzou secondary.  When the Tiger offense started faltering, Meredith and the Mustangs seized momentum.  And then seized more.  A three-touchdown lead was even bigger then than it is now, but it disappeared quickly, and Mizzou suffered a disheartening (and dishearteningly easy, when all was said and done) loss. 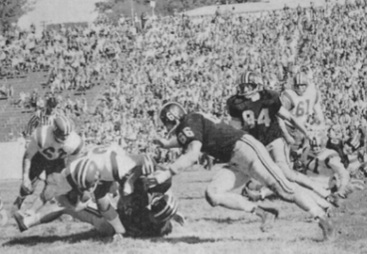 Just four games into his Mizzou career, Dan Devine found his team at a bit of a crossroads.  Going back to the end of 1957, Mizzou had now lost six of seven games (and one coach) after a 5-1-1 start for Frank Broyles in Columbia.  Devine was starting to significantly fear that if Mizzou faltered in Manhattan, he would lose the faith of his team, and then things would really start falling apart. From Bob Broeg's Ol' Mizzou: A Story of Missouri Football:

"Emotionally I shot the whole wad," Devine said 16 years later.  "As we sent them onto the field, I said to myself, 'We could wind up 1-9 or respectable.  If they do what I say they have to do to win and still lose, they'll lose faith in me as a coach.'"

Meanwhile, K-State was a decent 2-2, coming off of a 23-6 thrashing of Nebraska (Nebraska got thrashed by pretty much everybody in 1958...good times), and while Mizzou was the more talented team, they were clearly lacking in confidence.  But when the game started, Mizzou found its misplaced confidence.

This one wasn't close.  Mel West, who was getting plenty of playing time due to the slew of early-season injuries in the Mizzou backfield, rushed for 170 yards, but the big story was Phil Snowden's sudden passing prowess.  While Mizzou rushed for 231 yards, Snowden was play-faking his way to a 10-for-13 performance, firing mostly to Danny LaRose and Russ Sloan.  Really, 10-for-13 in 1958 would have been like about 30-for-35 today.  It really didn't happen.

Either way, a laugher was exactly what Mizzou needed, and thanks mostly to West and Snowden, that's what this was.  Charlie Rash did miss a PAT, bringing an end to a long streak of successes (he was approaching a national record for most consecutive made PATs).  But that was about the only negative from this blowout win. 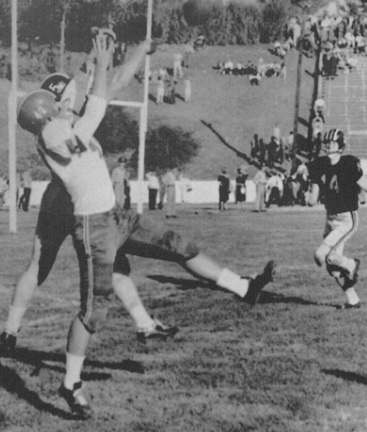 How important is confidence?  Without it, a 19-point lead is not safe.  With it, you persevere in the closest of games, even when injuries are piling up left and right.  As October prepared to roll into November and Mizzou attempted to move to 2-0 in conference, a tricky Iowa State team came to down.  The Cyclones had shown less hope than Missouri in going 2-3--after starting with wins over worthless Drake and Arizona teams, they had scored a combined six points in losses to Nebraska, Kansas, and Colorado.  They had only given up 34 points (6.8 per game) on the year (20 in a shutout loss to Colorado), however, so they could hang around with good defense.  Plus, despite the struggles to get on the scoreboard, they had a lot of explosive potential with the presence of halfback Dwight Nichols, who led the Big 7/8 in total offense three straight years, from 1957 to 1959. 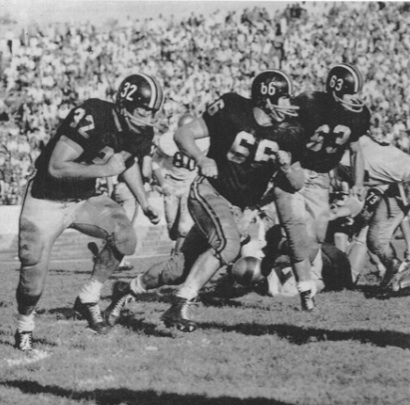 This game ended up being the typical affair for Nichols.  He was dominant, rushing for 124 yards and keeping the chains moving; but as defenses had done to them all year, Mizzou stiffened in the red zone and, for the most part, managed to keep Nichols and the Cyclones off the scoreboard.

The injury bug added to the degree of difficulty.  After bursting up the middle for a first-half touchdown, Phil Snowden got hurt again.  Plus, end Jack Kirkpatrick fractured his leg.  Just as Norris Stevenson and Hank Kuhlmann were getting 100% healthy again, Mizzou took more hits.

But it didn't matter.  Timely defense and two great scoring drives were all Mizzou needed to get back to .500 for the season.  For the second straight year, Mizzou would enter November with dreams of a conference title--an impressive thing considering how down they were just two weeks earlier. 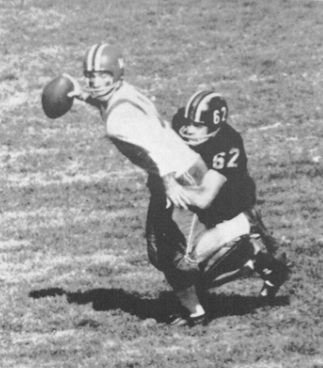