The Best Win in Mizzou History - The Preliminaries (Day Three)

Share All sharing options for: The Best Win in Mizzou History - The Preliminaries (Day Three)

That's right, it's time for the next official Rock M Nation tournament. On the heels of last year's Mizzou 25 competitions and this offseason's Meme Madness, we are now going to spend the next month looking at some of the greatest wins in Mizzou football history and attempting to pinpoint the single biggest one.

But before we can do that, we have to solidify the field of 32 wins. There are four regions, once again skewed slightly toward recency--the 2000s Region, the 1976-2000 Region, the 1963-1975 Region, and the Pre-1963 Region. Seven of the eight games from each region have been chosen, but for the next four days we will be using Play-In Games to set the field. 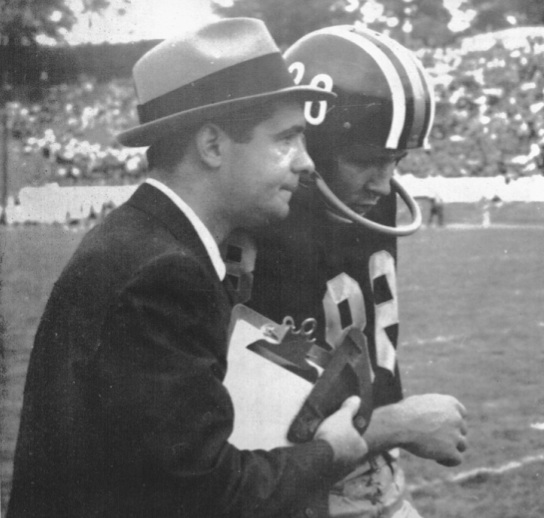 Dan Devine, prepare to get some attention in this region.

Why it is notable: I'll let Bob Broeg tell the story for this one:

This one, a night game watched by an overflow 41,000 [in Little Rock], pitted Devine against the man he had succeeded, Frank Broyles, who had walked away from Missouri and established a dynasty at Arkansas. Emotions ran high. Both coachces were up and down like jumping jacks. At one point Devine, annoyed, moved the stakes for a first down when the Arkansas chain-gang seemed reluctant to accede to an official ruling. Six Arkansas state police escorted the Missouri coach back to the sideline.

Late in the third quarter, Gus Otto scored from two yards out, and thanks to a dominating defensive effort led by future NFL end George Seals, Mizzou shut down the Arkansas offense for a satisfying, ever-so-slightly vengeful win.

Why it isn't already in the field: Tight losses to great Nebraska and Oklahoma teams prevented Mizzou from making a tremendous amount of noise in 1963, so this one has been forgotten over time. Plus, while momentary revenge must have tasted sweet, Arkansas did win the national title the next year. Pretty sure they'd take that over a win in this specific game.

Why it is notable: Mizzou passed for a whopping zero yards in winning this slugfest, but they won anyway thanks to a shocking 52-yard field goal from Mizzou great Bill Bates. As documented here, Mizzou had been outscored a shocking 61-0 in their previous seven quarters of play, but a simplified offensive attack and a killer defense let Mizzou jump out to a 10-0 lead before having to hold on tight for a 3-point victory. Oh yeah, and it was the last time Mizzou won in Norman. Sigh.

Why it isn't already in the field: In all, 1966 was a transition year for Devine's Tigers. They had to replace a ton of talent from the 1965 Sugar Bowl squad, and while they were building up for a big run of success, there was rebuilding to be done in 1966, particularly on offense. The 6-3-1 final record allows this great win to be overshadowed as well.

Why it is notable: Bo Schembechler's first Michigan team would go on to upset Ohio State and make the Rose Bowl, but they got positively rolled up in the Big House in the first Saturday in October. Mizzou took a 24-3 lead into halftime, but the host Wolverines fought back. It was 24-17 when the fourth quarter began, but Joe Moore's 62-yard touchdown run opened the floodgates. The Mizzou defense forced a couple of late turnovers, and this one ended up being as much of a "We're ready to make some noise" statement as anything could have been in 1969. This was one of Devine's two most successful teams--only an upset loss at Colorado prevented Mizzou from an undefeated regular season.

Why it isn't already in the field: While winning at Michigan was certainly great, big conference wins over Nebraska (17-7), Oklahoma (44-10) and Kansas (69-21) overshadowed it a bit when all was said and done.

Why it is notable: Mizzou exploded for 28 points in the second quarter to lock down their first bowl win in five years, in the 1973 Sun Bowl. The game featured one of the most exciting touchdowns in Mizzou's bowl history. After falling behind, 21-3, Auburn scored on a 17-yard touchdown pass, cutting Mizzou's lead to a manageable 11 points with just eight seconds left in the first half. But Auburn didn't squib the kickoff--they kicked to Mizzou's great returner John Moseley, and he returned it 84 yards for a touchdown as the first half expired. The 28-10 lead was held safely throughout the second half. After the ineptitude of 1971's 1-10 campaign, followed by the up-and-down nature of the 1972 season (see here, here and here), Mizzou announced to a national television audience that they mattered once again in the world of college football.

Why it isn't already in the field: Well...yes, they played well, but this was just a 6-5 Auburn team they beat up, and the season had had much higher hopes than a Sun Bowl win when Mizzou stood at 7-1 before a three-game losing streak ended the regular season.

Why it is notable: All the injuries in the world can't explain Mizzou's 1976 season. Beat #8 USC, get rocked by a mediocre Illinois team, beat #2 Ohio State, crush #14 North Carolina...and lose four of six (including losses to iffy Iowa State and Kansas teams) to end the season. Amidst all the crazy results was Mizzou's second straight win in Lincoln, coming this time against a #3 Husker team. Having lost QB Steve Pisarkiewicz and RB Curtis Brown to injury, Mizzou relied on the arm of backup QB Pete Woods; Woods made key connections to Kellen Winslow and Joe Stewart, and Mizzou led 23-18 at halftime. Nebraska stole momentum and the lead, 24-23, and with Mizzou backed up at its 2-yard line, Woods found Stewart for an astounding 98-yard touchdown that gave Mizzou the lead for good. The Tigers made QB Vince Ferragamo's life hell for the rest of the game, and Mizzou had beaten its third Top 10 team (fourth Top 15) of the year.

Why it isn't already in the field: It was actually Mizzou's third win in four tries against Nebraska, plus while the win moved Mizzou to #10 in the country, they would lose three of four to end the season and miss a bowl. That's right, they beat four Top 15 teams and missed out on a bowl bid. Oh, Uncle Al.