Share All sharing options for: Mizzou 2009, Part Three: My Guys 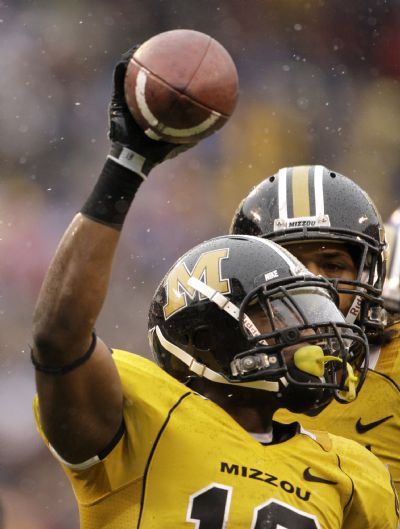 END_OF_DOCUMENT_TOKEN_TO_BE_REPLACED

Part One: Blaine Gabbert and the Four-Year Precedent - Why establishing expectations is so difficult

For the past two years, our colleagues at Burnt Orange Nation have run what's become one of my favorite features, a post titled "My Guys."

In essence, PB, proprietor of the site and SBN College head honcho, picks out the five guys he thinks might be flying just a little too far below the radar for his tastes. Here's how PB explains it in this year's version of My Guys:

One of my favorite pieces to read prior to each MLB season is Joe Sheehan's "My Guys" column, penned before each year to highlight those players Joe is eyeballing for a breakout season, yet who aren't receiving big time hype. Translating that to Texas football, I'm looking for those guys (limit of five) who might surprise a lot of folks with how well they play this year -- those with the highest production-to-hype ratio.

This year, I've decided to shamelessly steal emulate and honor the My Guys concept. For the first time, allow me to introduce "My Guys" for the 2009 season after the jump.

Kenji Jackson -- Call me a sucker for fiery Mizzou safeties who wear No. 13. As Bill C. and I have discussed before, "Don't call me Ken-jee" Ken-jah Jackson would have been an all-American team if they composed a team of players who almost made plays in 2008. As a true freshman, he worked his way into starts against K-State, Kansas, Oklahoma and Northwestern. Despite limited time, Jackson finished seventh on the team in tackles in 2008 (despite the stat killing "DNP" against Illinois), ahead of Ziggy Hood, Luke Lambert, and Stryker Sulak, among others. In the last two seasons, the MU pass D has had no shortage of DBs willing to hit. Jackson certainly showed the ability to hit on defense and special teams in 2008, and if he can make up those couple of inches he always seemed shy of in coverage in 2008, he could be one of the most pleasant revelations for the MU defense in 2009.

Jerrell Jackson -- Not counting TE Andrew Jones, Wes Kemp was "the big get" for the receiving corps in the recruiting class of 2008. Little (if any) hype went the way of Jerrell Jackson, the 2-star athlete from Houston, until fall camp started last August (although, we have to give kudos to Ridiculous Matt/Mizzourobot, who called him as his sleeper in the class). Even though every single receiver Missouri has recruited in the last two years has made some kind of reference to being "the next Jeremy Maclin," Jackson may actually get the chance. Jackson was quiet outside of the SEMO game in 2008, but his dual threat potential has had "those in the know" salivating for the last 12 months. Missouri's success on offense over the last few years has been predicated upon depth of weapons; if teams load up on Derrick Washington and shade their coverages on Jared Perry and Danario Alexander, Jackson and Jones become prime candidates for big years.

Andrew Gachkar -- All the love for the linebacking corps is usually directed toward Sean Weatherspoon, and rightfully so. Luke Lambert may not be a star, but he's certainly a known commodity. In the spring game, new DC Dave Steckel looked committed to keeping Missouri's base 4-3 on the field rather than changing to the nickel set Missouri favored for the majority of 2008. There's always the distinct possibility that Missouri goes back to the base nickel with Carl Gettis in the slot in 2009, but that will largely depend on the play of Gachkar. Much like linebacking counterpart Will Ebner, I've raved about Gachkar's motor and pursuit. In Steckel's defense, which appears to favor pursuit above all else, Gachkar is the kind of linebacker that can make or break the system. Here's to hoping "My Guy" makes it rather than breaks it.

Aldon Smith -- I wrestled with including Smith, considering he's been seeing a lot of love from Dave Matter and Gabe DeArmond this offseason. Considering he's a "non-starter" (although he'll reportedly see significant snaps), I feel comfortable enough calling him under the radar. Practice reports have indicated that he, alongside Brian Coulter and Jacquies Smith, have created a major source of depth at defensive end. Some have gone as far to say the Coulter/Smith/Smith trio (law firm?) may be the best D-end group in recent history -- history that includes Sulak and Mizzou sackmaster Brian Smith. Good enough for Gabe and Dave means good enough for me.

Kip Edwards -- Four defensive players on My Guys, including two defensive backs? Blasphemy, right? Admittedly, this pick may be a bit of a stretch. Edwards may have a battle ahead of him to fight off Kevin Rutland, Munir Prince and Trey Hobson for the cornerback spot opposite Carl Gettis, as well as a battle to beat DeVion Moore and others for the right to return. What comes to mind for Edwards in what little I've seen of him is "fluidity." His motion in the defensive backfield seemed extremely smooth in the spring game, as he glided to pick off a telegraphed out route from Blaine Gabbert.