This is the third installment of the 2009 edition of the SB Nation Big 12 Roundtable. This week's roundtable is hosted by Clone Chronicles, which will have a recap post later in the week.

On to the questions!

1. The Big 12 has looked more unimpressive than impressive thus far. Do you attribute this to early season struggles, or does the conference look to have regressed from '08? Please explain.

I don't think the two options are mutually exclusive. I don't know why there's a huge concern about the conference regressing from its 2008 form. The 2008 season was a banner year for the Big 12. The South had three teams in national title contention late in the season, with its fourth place team as a legitimate threat to most teams in the country. The North had all three bowl-bound teams win their bowl games. Those seven teams all received votes in the final AP Top 25. Five of them finished in the Top 25, more than any other conference.

Yes, the Big 12 looked to be strong at the top, and the losses by the teams in the state of Oklahoma are a little bit of a threat to that top-heavy supremacy. But I don't think that there should be huge surprise about the dropoff from 2008.

2. When looking at our teams' schedule, sometimes it's hard to get excited about non-conference portion of the schedule, except for maybe one game. In general, are you content with your team's non-conference scheduling? Is there an opponent you'd like to see on a regular basis, that you currently do not?

Scheduling is a double-edged sword. Of course I'd love to see Missouri playing marquee games in big environments and have big-time programs come to Columbia. But what incentive does Missouri have to schedule these games? None. Kansas proved it in 2007.

The Illinois issue has been discussed ad nauseam. It was nice having that "BCS vs. BCS" matchup at a neutral site (and a now fertile recruiting ground for Mizzou) to open the season and cause excitement, but I'm not wringing my hands about losing that game. I think if I had my preferences, my non-conference schedule would look like this:

-- High-level non-BCS opponent home and home(Nevada would have counted, if not for the Notre Dame debacle)

3. Over the years we've seen a fair share of teams lose the week they appear on the SI cover. Does the "SI Curse" exist, is it a coincidence, or is it something that we only take notice of when it rings true (but forget when it does not)? Explain.

Coincidence. Houston is a good football team. When Mizzou "succumbed" to the SI Jinx, they were beaten by a better football team that night. I don't blame Sports Illustrated for Oklahoma's athleticism that night in San Antonio. 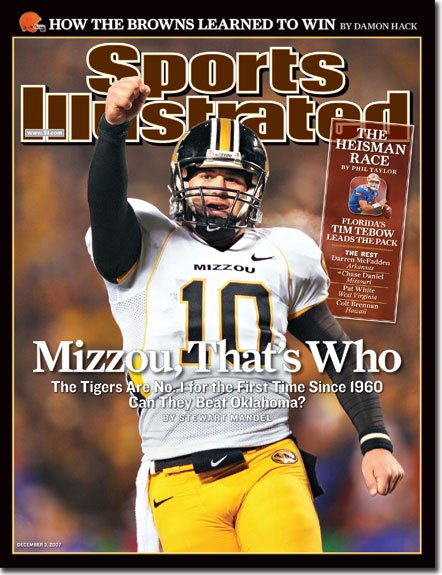 No, Sports Illustrated. They can't. Don't rub it in.

4.What is the biggest question your team has to answer heading into Week 3?

After the Bowling Green game, I think the Tigers still have to answer what team they truly are. Are they the team that steamrolled a Big Ten opponent at a neutral site, or the team that struggled to put away at team at home that was picked to finish low in the MAC? Presumably, the answer is somewhere in between, but we still don't know what Missouri team to expect week-in and week-out.

The biggest individual questions on the team are probably at offensive line right now. However, Bill and I seem to agree that it's not as huge a question mark as many fans are making it out to be. The line did a fantastic job protecting Gabbert against Illinois, and although they struggled early against Bowling Green, the protection seemed to improve even though Gabbert appeared to get happy feet in the pocket. The run blocking was a little bit troublesome against Illinois, but the line did a fantastic job paving the way for Derrick Washington and Kendial Lawrence against Bowling Green. Don't get me wrong -- the line is certainly the biggest question mark in my eyes right now. I just don't think I'm as worried about it as most Missouri fans, especially with two more games (and three more weeks) to get things right before it gets tested against a very solid Nebraska D-Line.

No QBs? Sucks to be you, Taylor Potts.

My vote for Non-QB Offensive Player of the Week goes to Texas' James Kirkendoll, whose seven receptions, 102 yards and one touchdown helped pull the 'Horns out of a bit of an early funk and put away Wyoming.

My vote for Defensive Player of the Week stays at home, going to Missouri's Sean Weatherspoon. I'm really beginning to take the guy for granted. During the game, it felt like he was having a very average, productive but not great performance. After the game, I look at the stats and find that he had 14 tackles, including one for loss. Yep, just another day for Spoon.