Beyond the Box Score Preview: Furman

Share All sharing options for: Beyond the Box Score Preview: Furman

With Furman playing one FBS team a year, clearly this preview will not be quite as high as normal on the wonk scale, but it is still worth it to dive into the land of Furman and see what we find.

There seem to be two main lines of thought regarding this game, depending on how much of an optimist or pessimist you are.

I'm an optimist, so I lean toward (1), but for an FCS/1-AA team, Furman is a good one. They will not be intimidated by the Faurot Field atmosphere, not after recent trips to Virginia Tech and Clemson.  If Missouri plays well, then they'll be fine, and the backups should play most of the fourth quarter.  But this game will come down to how Blaine Gabbert and Mizzou respond to a scare.  If Gabbert gets happy feet again and isn't settled down in the pocket, then this could be a four-quarter game.  If he's on, and the offensive line is blocking well, and the defense is swarming, then it will be over by halftime.

I have full play-by-play data for 2007 and 2008, so I might as well use it, right?  Let's take a look at Furman's "+" numbers from their two FBS games of the last two years, against Virginia Tech and Clemson.  Clearly we shouldn't draw too many conclusions based on two games, much less two games from previous seasons (looking at Mizzou games from September 2007 and 2008 wouldn't give us a ton of useful information), but this may give us a good idea of where Furman is usually strong or weak.

(The ranking listed is where Furman would rank with that "+" rating if they were an FBS team, out of 121 teams.)

So, generally speaking, here's what we're dealing with:

We'll revisit these bullets in the Keys to the Game.  For now, let's take a quick unit-by-unit look.

The man behind center is senior Jordan Sorrells.  A good-sized kid at 6'2, 205, Sorrells has thus far made plays with his arm (71.4% completion rate, 162.9 QB Rating, 8.7 yards per pass) and legs (four carries for 51 yards, including a 46-yarder), albeit against Presbyterian and Chattanooga.

A fullback heading into the season, awesomely-named Tersoo Uhaa has been the main ball-carrier for the Paladins, gaining 182 yards on 37 carries (4.9 per tote) and scoring four touchdowns.  He's a 5'8, 205-pound bull, but he doesn't exactly seem like either a breakaway threat or a shifty, hard-to-grab guy (like Bowling Green's Willie Geter was last week).  Freshman Jerry Williams has been the secondary ball-carrier so far, with 14 carries for 81 yards.  Last year's leading rusher, Mike Brown, has been out with an ankle injury. Furman is a run-first team, averaging 36.5 rushes to 24.5 passes thus far.  Only one Paladin receiver has caught more than five passes, and that's the guy above, junior flanker Adam Mims (5'9, 187).  Expect quite a few short passes to him, as he is not much of a deep threat (longest catch this year: 18 yards).  Tight end Chris Truss was an all-SoCon player last year, but he has two catches for 11 yards so far in 2009.

Furman was at least competent passing the ball the last couple of years against VT and Clemson, but it seems if Mizzou tackles well, it will be hard for them to drive the length of the field. 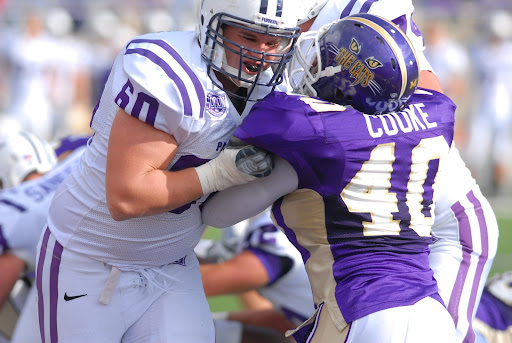 It seems likely that Furman's offensive line will be a little bit overwhelmed by a solid FBS defensive line, but we'll see.  The Missouri D-line has all sorts of big-play potential, but they're still pretty young.  Both starting tackles are new starters, so have fun with that, Aldon Smith, Jacquies Smith and Brian Coulter. 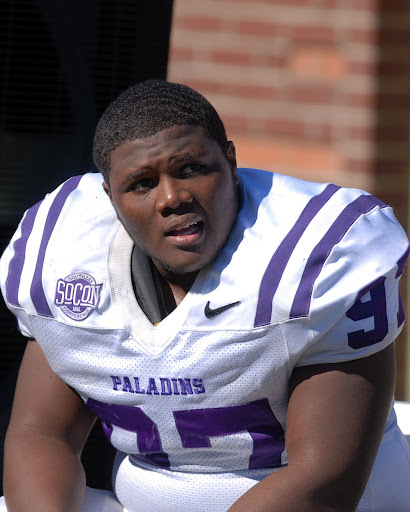 While the Furman OL hasn't fared well against FBS competition, the DL has held its own.  Nose guard Justin Brown is an All-SoCon performer and undersized anchor (5'11, 265!!), while senior end Shaun van Rensburg (6'4, 250) looks the part.

The LB corps is seemingly the strength of the Furman defense.  Rover (which is as much DB as LB) Max Lerner (junior, 5'11, 192) is the reigning SoCon Defensive Player of the week after a 2 TFL, 1 Pick Six performance last week against Chattanooga.  Meanwhile, sophomore Kadarron Anderson (6'1, 235) leads the team in tackles and sophomore Chris Wiley (5'10, 209) has been disruptive so far this year. 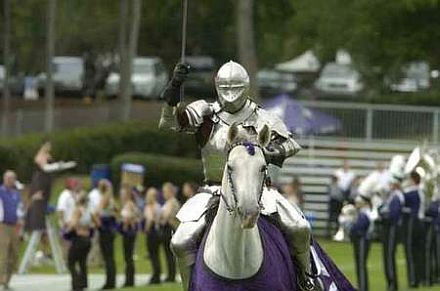 I couldn't find a good action shot of any Furman DB, so you get the mascot instead.  Sophomore corners Jordan Griffin (5'10, 167) and Ryan Steed (5'11, 185) have been solid so far this year but could be overmatched by Missouri's much bigger receivers.  They'll be giving up six inches and 30-40 pounds to Danario Alexander and five inches and 40-50 pounds to Wes Kemp.

Here are your raw numbers:

Three Keys to the Game

This is an over-simplification, but there are three main ways you score points: 1) break off a big play or two to get down the field, 2) dink-and-dunk for 3-4 yards at a time, or 3) utilize turnovers and special teams to start deep in the opponent's territory.  For the Furman offense, (1) is not really an option unless Missouri misses some tackles.  The Paladins will try to get away with (2), but again, without a deep threat this is hard to accomplish.  You have to go mistake-free for the better part of 10-15 plays, and that's not easy. So, uhh, TACKLE.

Turnovers are always important, but they're even more important when you're dealing with an extreme underdog.  Missouri handed Bowling Green two field goals last week (they were only field goals thanks to great defensive effort) due to fumbles in their own territory.  Make Furman drive the length of the field, and they probably won't beat you, but hand them free points, they'll stick around a while and make you clam up.  Turnovers were also the primary reason Furman lost to Clemson in 2007.

The biggest thing I'll be watching in this game is simply Blaine Gabbert's pocket presence.  Bowling Green got into his head, and it took him the better part of 2.5 quarters to get over it.  Furman will likely drop into the same soft coverage that BGSU did, and Gabbert must make his reads, trust his line, and make whatever throws are available.  You figure Mizzou will be able to beat Furman over the top at some point, but you have to respect your opponent, and if they're making a concerted effort to take away the deep ball, just give your faster-than-their-DBs receivers the ball underneath in space and let them make guys miss.

If Missouri plays patient and smart, this one won't be much of a game.  The BTBS projections say Mizzou by 31.2, so we'll say Mizzou 41, Furman 10.  That's much more of a blowout than what is usually done to Furman in these games, but who am I to disagree with the numbers?