1 - No Mizzou (or Kansas) game to worry about this weekend--big plans for the bye week?

Michael Atchison: 1 - My calendar is delightfully empty, allowing me to recover from last weekend’s trip to Disney World.  I imagine that there will be a football game on TV to watch.  Should be nice.

2 - I’m not sure that I even made any predictions, though my impressions haven’t changed much.  I didn’t expect Colorado to be good, but I thought they might have a chance, and that’s clearly out the window.  Kansas and Nebraska, if anything, have been a little better than I expected.  The divide between the top three in the division and the bottom three couldn’t be any more obvious.

3 - Kansas State at Iowa State - Iowa State by 3
OU at Miami - HUGE game.  I'm taking OU by 7, but this game could be awesome.
Texas A&M vs Arkansas at Jerry World - Arkansas by 10
Colorado at West Virginia (Thursday) - West Virginia by 30
New Mexico at Texas Tech - Texas Tech by 24
Kent State at Baylor (moment of silence, please, for the emptied Hot Tub) - Baylor by 7

The Beef: 1 - My plans include coming to work at 5:45 a.m. on Saturday morning and hopefully leaving by around 6:00 p.m.  Then, I will return on Sunday around the same time (maybe a hair later) and will hope and pray I wont have to be there until past midnight.  I have three of these weekends (the first was the weekend before the Illinois game and the last is the weekend of the CU game) and I am thankful I am not missing a home Mizzou game (as these weekends are absolutely mandatory), but wow will it suck.

2 - I don’t really think they have.  I still think the first to 6 wins gets it.  kU’s offense is perhaps even a little better than I thought it would be since I was very impressed by Opurum and the change of pace he brings.  However, their defense is worrisome to me.  For NU, the offense will need to do something against a non-Sun Belt team, and their secondary is certainly of concern.  For Mizzou, the running game and blocking at the point of attack is bothersome (especially when it was thought to be a strength) and I’d like to see us shore up the front four just a bit more, especially as we get into teams who will try to run between the tackles.

3 - Kansas State at Iowa State – I guess this game is in KC, correct?  I really have no clue, as I am guessing kSU will have more folks on hand than ISU (though those folks do love them some KC).  I guess I will go with kSU and the experience at head coaching to get them a close’ish win.

OU at Miami – Any word on Bradford?  I guess I might have gone Miami before their tumble to Va Tech.  I imagine they would have tremendous home field advantage, even though it is in Miami.  I think I like OU to make a statement here and for Miami to not have bounced back from the loss.

Texas A&M vs Arkansas at Jerry World – I know very little about aTM, but even a fat, glasses-wearing, D&D dork could score on Arkansas right now (ZD jokes not included).  I think I will take Arkansas but a statement from aTm would not surprise me.

Kent State at Baylor (moment of silence, please, for the emptied Hot Tub) – Baylor, but I think they may struggle and their D may have to win this one for them

4 - Good stuff…if only I knew who Adam Duritz (and Emmy Rossum I guess) was.

RPT: 1. Pretty much the same plan as last week. Claim a spot on the couch around 9-10 a.m., and then watch football and refuse to move except for eating for the next 14 hours. I can't decide if this makes me a great American or a lazy piece of crap. Probably both.

2. Well, I had Missouri, Kansas, and Nebraska all tied at 5-3 atop the North, with Kansas winning on the strength of an undefeated North schedule. I'm not sure I buy that anymore. I think either Missouri or Nebraska takes 'em. As for what Mizzou and the 'Skers are capable of in the long term, I'm still kind of putting off judgment until after next Thursday.

OU > Miami: That defense is solid, and I expect it to stay that way

Texas A&M < Arkansas: A&M looks far improved this year, but the Hogs REALLY need this one

Colorado < West Virginia: Bill Stewart is going to have a coaching advantage in this one. Wait, WHAT?

Kent State < Baylor: Baylor still has a minor amount of talent, if they can only get the ball in their hands

4. Derek Jeter: This list includes a former Miss Universe, Scarlett Johansson, Jessica Alba, Jessica Biel, and the ultimate trump card as far as I'm concerned, Minka Kelly. Give me Jeter's list over Duritz any day of the week, but more power to Duritz for trading up moreso than Jeter is.

Michael Atchison: I have no idea who Minka Kelly is.

Michael Atchison: Oh, so she’s a girl on the internet.

RPT:  Do they exist in places other than the internet? I didn't know I was going to have to do this, Atch.

Doug: 1 - It's my 5th anniversary this weekend!  Not that any of you care, of course, but I just figured I'd toss it out there.  I'll probably catch some of the games on Saturday, and on Sunday, yard work... because it's not like the Chiefs game is actually going to be on TV.

2 - If anything, the top 3 teams have become more jumbled (toss KU, MU and NU into a hat and which ever name you pull out you can make a convincing argument for that winning the North) and the bottom 3 have become just as jumbled as well.

I think KU's defense is still very much a work in progress, however, I think it's come quite a ways from what people expected at the beginning of the season to now.

3 - Farmageddon?  Seriously?  Apparently they are nowhere near a sellout on this game, but I'm going to pick Iowa State, just because of better quarterback play.
Miami got ripped up by a really bad offensive team in VaTech, so OU by a lot.
Uh... I'll say A&M since it's in Dallas.
West Virginia... by a substantially large point total.
Texas Tech... and watch for them to run the score up big time.
Who's Baylor's back-up qb?  I have no idea.  So, Kent State in what will probably be a very quiet stadium.

RPT: Not to shift the focus away from Minka Kelly and lmgtfy.com, but I present to you visual representation of Farmageddon: 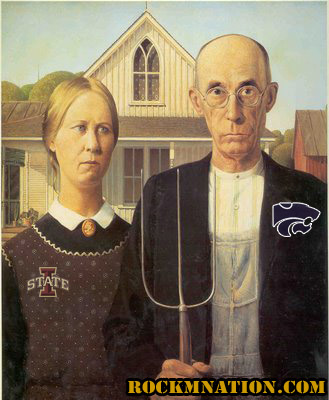 The Beef: Anyone have an over/under when ghtd’s lazy ass will join us this morning?

RPT: The Rangers are mathematically eliminated from the playoffs, right? ghtd may not ever be joining us again.

ghtd36: So sorry to be answering my e-mails AT 9-FREAKING-42 IN THE MORNING.  Heidi-ho, neighborinos.

1 - The girlfriend is coming into town and we will be going to the State Fair of Texas. That sound you hear is my cholesterol rising, yet the girlfriend will find a way to stay trim and slender. Sometimes I hate girls.

2 - I see the North more as a three-team race, if anything because the teams in the North haven't proven anything. Mizzou stomped Illinois, but apparently Illinois is running out of Juice (POW! NAME JOKES! POWPOW!). Nebraska's best win is a loss. Kansas has played one real team -- Southern Miss -- and beat them by seven at home. So, really, it's a three-horse race of mystery. It's mystery wrapped in an enigma wrapped in a vest.

3 - Kansas State at Iowa State -- Iowa State. The battle for Worst Team in the Big XII rages in Ames, and the Clones come out a winner thanks to Carson Coffman out-mediocreing Austin Arnaud.

OU at Miami -- OU. Miami beats the 7 1/2 point spread, but Oklahoma wins and gets back in the national title hunt. My boss -- an OU grad -- actually wants to bench Sam Bradford in favor of Landry Jones because of Jones' rapport with the wide receiving corps. He thinks Bradford's Heisman (remember that little thing?) was due to the WRs last year. And what's strange is, he's not completely crazy.

Texas A&M vs Arkansas at Jerry World -- Arkansas. TAMU's dreams of returning to glory are smashed at the most incredible venue I've ever been in. I went to the MNF game, and the place is simply cartoonishly big. I kept expecting Wile E. Coyote to start dropping anvils off the giant screen. It's an unreal structure.

New Mexico at Texas Tech -- Texas Tech. But god help you, Eric Stephens, if you Tweet about it afterwards. The Captain is not amused.

Kent State at Baylor -- Kent State. I could seriously see Baylor not winning another game this year. Hot Tub was that important to the team.

4 - Are we really to the point where we're discussing girlfriend resumes? Is this US Weekly? Your hetero street cred took a major hit with this question, Bill.

Michael Atchison: At the Texas State Fair, that mystery wrapped in an enigma wrapped in a vest will be wrapped in cheese and then wrapped in batter and then deep fried for your enjoyment.

ZouDave: and served on a stick

RPT: "That sound you hear is my cholesterol rising, yet the girlfriend will find a way to stay trim and slender. Sometimes I hate girls."

Would you rather it be the other way around?

And enjoy the fried butter. There's nothing quite like the ridiculousness that is the Texas State Fair.

By the way, to further divert this way-too-boring roundtable, as I posted on Defending Big D yesterday, the sexiest phrase in the world might be "Neal-Richards-Eriksson." Oh my, what a line. The Beef: I fear that after the Minka Kelly debacle, this is where we lose Atch for good…

Michael Atchison: Trust me, I feel even less clued-in than JoePa at the moment, but nearly as sexy.

The Beef: Is this where I need to try to pick a fight with someone again?  Or is this the play where I run down the field and act like I’m lost?

The Beef: Bill’s stats believe Mizzou is the 82nd best team in the country…

The Beef: I guess it is not as fun when Bill is not around to defend….

ghtd36: Jeez, here we are clearly trying to draw Bill offsides, and he won't bite.

Numbers be damned. I'm going to look up all my information in my gut feeling.