Today, we look inside Spoon's 111 total tackles and try to pick out his best game. Nominees after the jump.

- Sean Weatherspoon vs. Bowling Green: Spoon came to play against Bowling Green before the defense even took to the field against the Falcons, as he lit up Willie Geter for a one-yard loss on a 43-yard punt by Jake Harry. Spoon would end up posting his season-high in tackles. 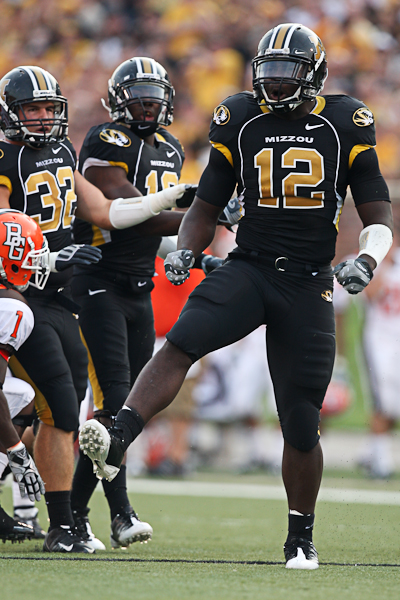 THE LINE: 14 tackles (10 unassisted), one tackle for loss

- Sean Weatherspoon vs. Texas: Kind of like Chase Coffman in Austin the year before, Spoon made the lonely decision to have a fantastic game in the midst of a slaughter at the hands of the steers. In his best Laurence Bowers impression, Spoon filled out the stat sheet with a sack, an interception and a pass break up in addition to another double-digit day (er, night) in tackles.

THE LINE: 11 tackles (8 unassisted), 3 tackles for loss, one sack, one interception, one pass break up

- Sean Weatherspoon vs. Colorado: The 12 tackles are certainly impressive, but it was that one tackle for loss that demanded the most attention. Colorado has clawed back to a respectable 33-17 at the start of the fourth quarter, and had driven inside the Missouri red zone. Then on 4th and 1, Spoon stepped into his gap and absolutely blew up Rodney Stewart for a two-yard loss and a turnover on downs. Colorado never threatened again.

- Sean Weatherspoon vs. Baylor: Yet another individually impressive game in a defensively frustrating performance for the team. Spoon's 11 tackles in the game kept him moving up the Mizzou all-time tackles list, tying him at that point in the season with Travis McDonald for fourth all-time. He would end up just 17 tackles shy of tying James Kinney's school record of 430 career tackles.