Perhaps no defensive position can swing a game more definitively than defensive tackle.  Nebraska won the North on the back of a good DT and a transcendent DT.  Mizzou has nothing transcendent, but do they have enough to take pressure off of the rest of the defense?  Might depend on a redshirt freshman with high (internal) expectations. 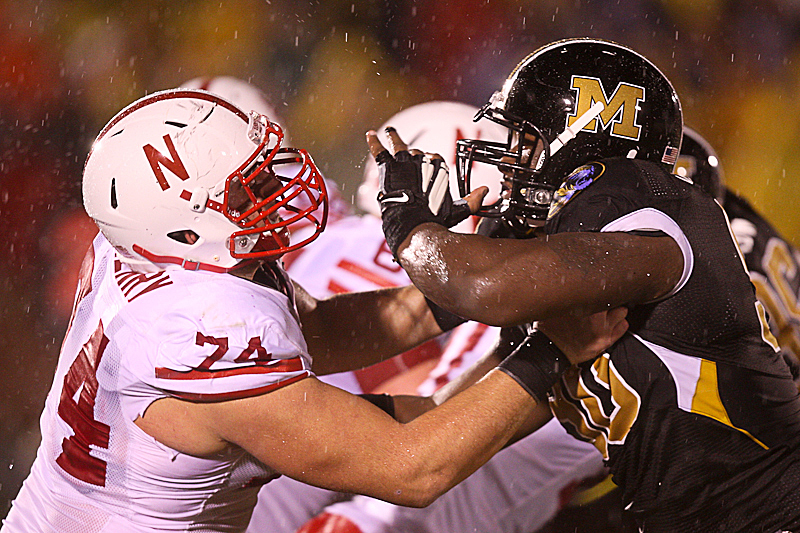 RPT: If RMN was in position to hand out "Most Improved" awards (and who says we aren't? It's a LONG offseason and we need content), Dominque Hamilton shoots to the top of the nominee list not just on the defensive side of the ball, but perhaps for the entire football team. Coming into 2009, we all questioned not who would replace Ziggy Hood (because that was supposed to be Jaron Baston), but rather who would replace the hole Baston would leave vacating that second DT spot. Early in the season, the answer was supposed to be Terrell Resonno. But not only did Hamilton seize control of that role, it's arguable that Hamilton overtook Baston from a production standpoint and became Missouri's No. 1 DT. From November through the Texas Bowl, Baston had seven tackles, none for loss. Against Baylor alone, Hamilton had eight tackles, 1.5 for loss including a sack. Hamilton had 24 tackles during those last five games, and assumed the Jacquies Smith "newcomer almost making a TON of plays" role. In fact, if Nick Florence is a half second slower getting the ball out in Columbia, Hamilton probably has 2-3 sacks in the game and Mizzou probably has a 9-win regular season. Hamilton is very serviceable as a run stuffer, but his biggest value is and hopefully will continue to be the push he can generate up the middle on passing downs.

Bill C.: Ross mentioned it above, and I mentioned it yesterday in discussion of defensive ends: what makes it hard to evaluate defensive linemen is that very few of them actually make a ton of plays, and an absolute ton of them almost make plays.  The near-misses could be a sign that they just need a little more awareness and quick reactions (i.e. experience), or that they're just not quite athletic enough to make plays.  Hamilton was an "almost" guy, but he made enough impressive plays to make you pretty confident that he's capable of making more in 2010.  A play-making DT is just about the biggest luxury a team can have on defense, and Mizzou might have one here. Bill C.: You can be a good defensive tackle and make few actual box-score worthy plays.  Jaron Baston is an example of this.  You occupy blockers and open up plays for the linebackers, and even if you only end up with a handful of tackles, you've done your job.  Ndamukong Suh is the exception to the rule, not the rule.  So ... is Terrell Resonno a decent tackle?  In two years of backup playing time, he's racked up 18.5 tackles and 2.5 tackles for loss.  He was not only overtaken by Dominique Hamilton for a starter position, but lapped by him.  Like a lot of Mizzou players, the Jeff City product certainly looks the part, but his level of competence could make the difference between a solid and a very good front seven.  If he can pull off the quiet responsibilities of a DT and make sure that guys like Hamilton, Will Ebner, etc., are able to make plays, then he's done his job.

Bill C.: Two players with completely different athletic resumes -- White was a big linebacker who took the Lorenzo Williams route from LB to DE to DT, Burge was recruited as a DT and is built to be just that.  They took turns edging past each other on the depth chart this year, with White taking the lead, then getting briefly surpassed by Burge, but they registered just one box-score worthy play between the two of them.  You'll see below that we are very high on a certain redshirt freshman (not to mention a true freshman that could get an opportunity to shine), but relying on newbies is never a very good idea.  It would help Mizzou significantly if one of these two players (I really don't care which, though it would be fun having a contributor with crazy blonde hair) raised their game this spring.  At least one of them will be on the two-deep just by default, but if one could actually seize playing time instead of stumbling across it, I'll feel much better about the DT depth.

Image via The Maneater

Bill C.: The ultimate tweener, Earnhardt was not fast enough to be a big-time defensive end, so he moved to defensive tackle, where he really doesn't appear big enough to make an impact.  He was near the top of people's "transfer watch" list after supposedly leaving the team for a little while, but he returned and stuck it out the entire year.  If he returns again for 2010, he'll need to a) put on a bit more weight, and b) try to squeeze into the role of the Hamilton/Lo. Williams type of DT, the quicker play-maker who could get pushed around but makes up for it with agility and, in theory, solid pass rush skills in passing downs.  I could see him creating a niche for himself as a passing downs specialist, but it hasn't happened yet, and I'm not tremendously optimistic.

RPT: Every offseason, I feel like there's a missed opportunity somewhere, usually as a result of injury. Back in 2006, it was Jeremy Maclin's knee. In 2008, it was Aldon Smith not qualifying in time. This past season, Foster was one of the revelations of fall camp. The kid out of North Crowley High in Fort Worth was becoming yet another two-star diamond pulled out of the rough by Pinkel until a torn ACL sidelined him for the season. Per Dave Matter:

He underwent season-ending surgery a week later, the ultimate buzz kill for a player who expected to crack the two-deep depth chart.

"I felt like I was so close that I could taste it," Foster said. "But I can always start over. It’s no big deal."

Foster's had to work his way up to 290 after leaving high school in the 265 range, so it still remains to be seen exactly what type of presence he's able to bring. But if I'm being pushed to name a newcomer of the year for the Mizzou D in 2010, my early money is on Foster.

Bill C.: I can't explain why I'm so high on this guy, but I am.  I fully expect him to not only challenge for playing time, but steal the starting spot opposite Hamilton; as I said above, it is a fool's errand to assume greatness out of freshmen and redshirt freshmen, but I just can't help it with Foster.

RPT: You can't help but think that Vincent has become a forgotten man in this recruiting class. Vincent hopped on board with Mizzou WAY early, opting in favor of taking what I'm sure was endless amounts of grief from the Kansans that surrounded him, even as he helped carry his high school to a state title. It's not too frequent that you can bring in a guy blending his reported athleticism and his size -- generally it's one or the other. The onus is now on Pat Ivey (who, we should add, has a fantastic track record) to get Vincent to desired playing weight without sacrificing any initial burst. We know there are some recruits, especially on the D-Line, that never really pan out, but I feel cautiously comfortable saying Vincent will see the field for a significant number of snaps; I think the question is whether or not it will be sooner rather than later.

Bill C.: Since I mentioned it with Justin Britt on the offensive line, I should point out that Vincent is a nationally ranked heavyweight wrestler at the high school level, so you're pretty much guaranteed good strength and footwork with this one.  He really might be able to make a quick impact in 2010.

In the end, the defensive tackle position for Mizzou in 2010 is a lot like defensive end -- lots of potential with only 1-2 proven quantities.  It doesn't appear the DT position has as high a ceiling, however.  Hamilton looks like a keeper, and it is quite possible that Resonno will mature into the role of starter a lot like Jaron Baston did (Baston really didn't do much his first two years either), but if Resonno doesn't take a step forward as a junior, then we're looking at a pu pu platter of possibilities, with no guarantees for success.  We are excited about the newest entries to the rotation -- Foster, Vincent -- but as it stands now, Mizzou will absolutely need one of the newbies to step up.  If they don't, this is the biggest question mark on the 2010 defense, bigger than even anything in the secondary.