The wide receivers lose Danario Alexander, and we worry about who will step up in his absence.  The linebacking corps loses Sean Weatherspoon, and ... we really do not worry much at all.  The strength of the 2010 defense will be the linebackers, combining fury, athleticism, and even a few proven quantities.  Let's take a look. 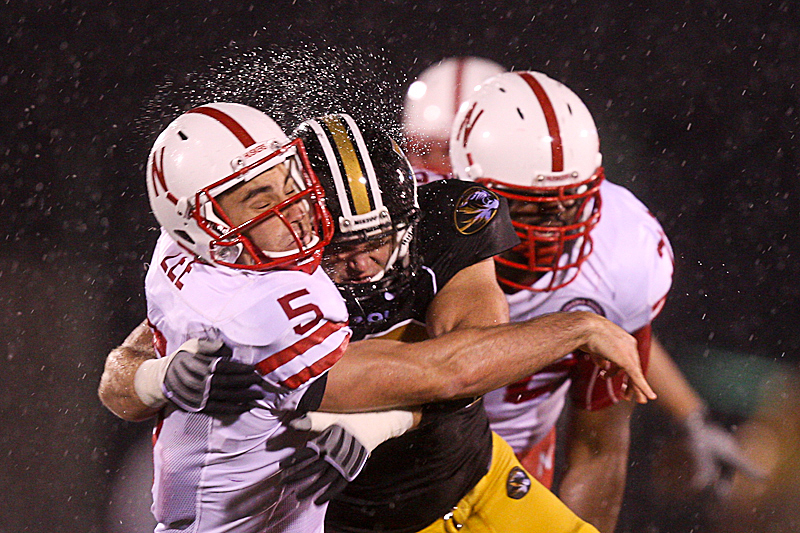 RPT: There's no unit on this team I'm more excited about than the linebacking corps, and there's no linebacker I'm more excited about than Will Ebner. My love for Ebner's style of play has been no secret. The man we branded "Category 32: Hurricane Ebner" continues to be one of the fastest pursuing, hardest hitting linebackers in the Big 12. His continued emergence as a rock solid middle backer actually brings to light what promises to be one of the more intriguing battles of the offseason between Ebner and Luke Lambert, who Ebner replaced and Wally Pipped after an early season injury to Lambert. Not only did Mizzou not really see a large dropoff in production once Ebner replaced Lambert, but there was a rather noticeable bump in production.

Bill C.: Will Ebner is the quintessential Mike Singletary-style linebacker, a guy who reads the situation, then barrels into the fray like a cruise missile.  He tore his meniscus against Nebraska, and not only played against Texas two weeks later, but played well.  He is big, mean, fast, and VERY easy to like.  He is the main reason Mizzou can lose a player like SPOOOOOON and not fear a dropoff at the linebacker position. 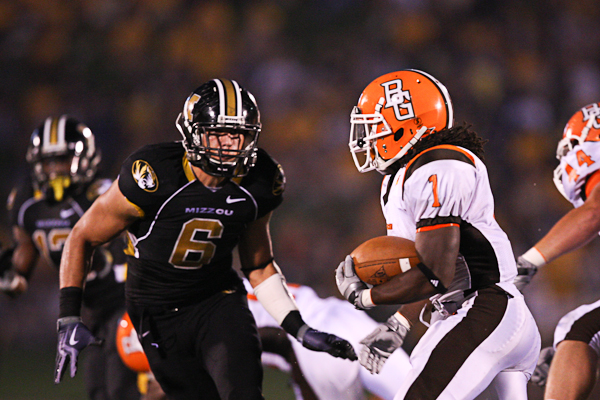 RPT: There's only so many ways you can call someone a "high motor guy," and I'm going to run out of ways to do so here pretty quickly. I entered 2009 incredibly excited about seeing Gachkar get extended playing time at the strongside backer spot, primarily because his limited time in previous years revealed fantastic pursuit skills and a quickness that would allow Mizzou to keep from having to default to nickel sets defensively. He's not quite the hammer that Ebner is, but he's yet another guy that can lay the wood when given a full head of steam. Gachkar has become an extremely solid "second option" in the linebacking corps -- although, conversely, this means I'm not sure you can count on him to carry the unit off the field single-handedly on each possession. My biggest concern is that we're seeing Gachkar at his full potential. He had such a quietly splendid 2009 that I begin to wonder about how much development he has left. On the flip side, however, I'll most certainly take another year like the one Gack had in 2009.

Bill C.: Ebner might have gotten more attention for his big hits, but Gachkar was nothing if not steady and tough*.  Ebner may be an attacking backer at MLB, but Gachkar was the pursuit guy, registering few hits behind the line of scrimmage but chasing guys all over the field, making tackles, and recovering fumbles.  His ceiling might not be as high as Ebner's, but he made the transition from special teams dynamo to quality starting linebacker in just one season, and he is a rock-solid player.

* You want tough?  Screw this "missing only one game with a meniscus tear" stuff.  Try battling a blood clot problem, HAVING A RIB REMOVED in Spring 2008, and playing every game of the 2008 season.  THAT is tough. 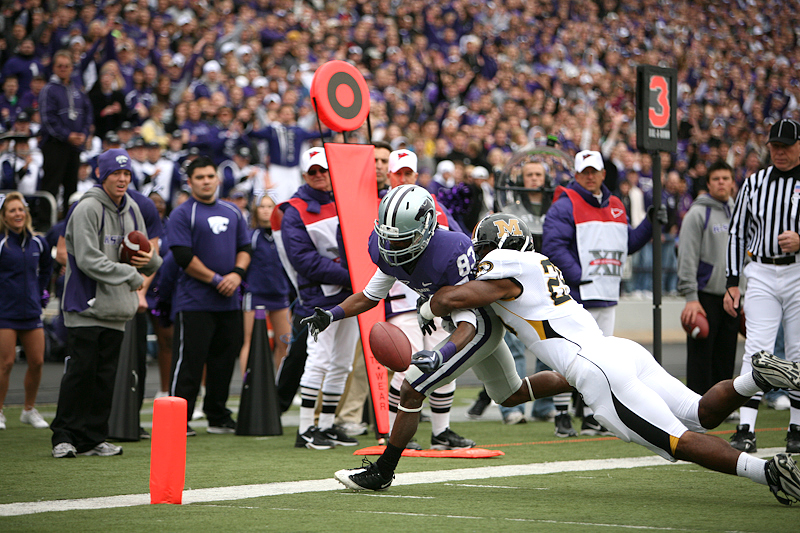 RPT: My love for Will Ebner and Andrew Gachkar and my resulting high expectations came out of watching the two on special teams during their respective freshman seasons. With Gooden, however, I've had high hopes ever since the Pflugerville product showed initial interest in the Tigers. I initially likened Gooden to David Overstreet, both of whom came across as quick-moving hard hitters who really straddle the line between linebacker and safety. Gooden's uncanny blend of strength, size and speed really made him a perfect fit for the Rover/"Murderback" type of position in the secondary, but I really look forward to continuing to watch his development at linebacker, where he bears the burden of representing Aaron O'Neal's No. 25 for the rest of his career. His battle for playing time with Donovan Bonner should prove to be one of the most entertaining battles of the offseason. 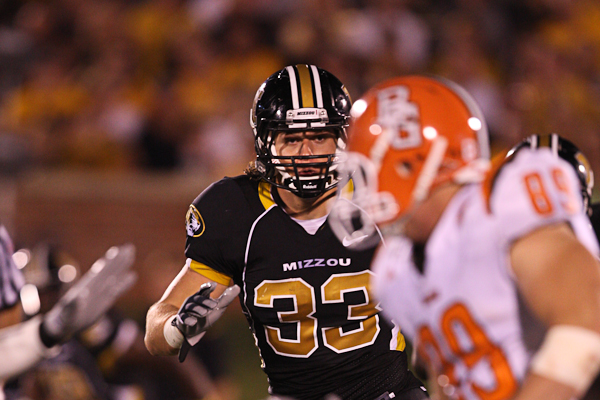 RPT: Only in the linebacking corps can someone of Lambert's skillset and production be considered somewhat overlooked. Mizzou's group of backers is teeming with such youthful upside that Lambert continues to be short sold. His starting spot is likely gone for good to Ebner, but Lambert has turned into such a clone of Brock Christopher that it really is hard to count him out. The rest of the group has the potential to be very high upside/high variance, but Lambert likely brings a very solid, sound performance each and every week. And that really seems to be the best way to describe Lambert: sound and solid. Is he solid enough to warrant time over these "big potential" guys coming up next to him?

Photo via The Missourian

RPT: You can't teach instincts. And if you could, Bonner could afford to skip a few lessons. Bonner came to Mizzou as a safety by trade and a linebacker by size, and VERY quickly worked himself out of a redshirt and onto the field as a true freshman. In early practices, all we heard about Bonner is how often he found himself A) around the ball or B) with the ball in his hands. Needless to say, these are qualities I value in my linebackers.

Bill C.: From the moment he showed up at practice in August, Bonner was basically considered The Next SPOOON by every reporter in the vicinity.  Unheralded, completely out-of-nowhere recruit?  Check.  From Texas?  Check.  Big, fast, and mean?  Check.  Sees the field as a backup and on special teams as a true freshman?  Check.  We forget that Weatherspoon did little his freshman season (14.0 tackles, 1.0 TFL) other than tantalize reporters in practice and give large hints of potential.  Well, Bonner (8.0 tackles, 1.0 TFL, in a much more crowded LB corps) followed the SPOOOON recipe to the letter.  Now, all he's got to do is break out with 100+ tackles on a Top Five team in his sophomore year.  No problem, right? Bill C.: Ahh, Tyler Crane, the Chris Earnhardt of the linebacking corps, i.e. the man without a position.  Crane was one of the sleepers in the 2007 recruiting class and actually played as an undersized defensive end his true freshman year.  He didn't, however, put weight on like the staff thought he would, and he redshirted in 2008 while learning the LB position.  He spent some time on the second string but didn't really make much of a name for himself.  Normally this situation -- kid from Texas spends a couple of years in the program, doesn't really move up the depth chart -- results in the high likelihood of a transfer.  However, Crane went so far as to post on Twitter that he wasn't going anywhere and that he loved it here.  A program needs a few lifers, and with such a dearth of upperclassmen on this team, I can't say I mind the thought of as many juniors and seniors as possible.  Will he ever see the field?  Hard to say.  I met him in person when he was on his recruiting visit; he looks like a phenomenal athlete, but he still needs a position to play, and he just be stuck between being an end and a backer.

Bill C.: Gotta love the underdog stories.  A walk-on from Houston, MO (yes, there is a Houston, MO), Gettys not only ended up earning some playing time in 2008, he ended up scoring a touchdown on a pick six late in the Nevada game.  Gettys looks like the stereotypical middle linebacker and impressed the coaches enough that he earned a scholarship in 2009.  Of course, he then tore up his knee early in the 2009 season.  Word is, he'll return for his senior season, and while he probably won't see too much playing time, he and Lambert (also an injury-plagued senior) make up the old guard of the LBs, and they will both be looked to for leadership.

Bill C.: Josh Tatum originally signed with USC out of high school, but after getting lost in the shuffle in LA, he transferred to one of Mizzou's favorite JUCOs, City College of San Francisco.  He and a teammate, safety Jarrell Harrison, were wooed to Columbia in the 2008 class.  Tatum was actually the second-highest ranked recruit in Mizzou's class, behind JUCO-bound Sheldon Richardson.  He sat out this season with back issues, which makes him a complete and total mystery heading into 2010.  If he's healthy and ready to show his stuff, he seems to have all the tools to become an effective, physical linebacker.  If he's not completely 100%, this unit is deep enough that he may never see the field.

RPT: Tatum is probably the biggest enigma of the group in my eyes. Because of his back problems, we really have no idea of what Tatum can bring to the Mizzou defense or what type of expectations we should place on him. Several junior college transfers to the Missouri defense (Pig Brown, Jasper Simmons, Jarrell Harrison) have acquitted themselves quite nicely during the past few seasons, and it'd be wonderful to see Tatum continue the trend. Frustratingly for Tatum, a depth chart featuring Will Ebner and Luke Lambert directly ahead of him is not going to be one that's easy to climb.

If nothing else, we can praise him for being the team's best inside videographer, as evidenced by this video of Spoon he gave to us last August:

Two Western Missourians (Wilson went to Raymore-Peculiar, while Burton went to Lee's Summit West) of almost the exact same build and speed.  Rivals ranked them the #13 and #14 recruits out of the state of Missouri in 2008, and as long as one of them works out, Mizzou is absolutely stacked at LB for the foreseeable future.  Actually, Mizzou might be stacked even if neither works out, meaning this is a big spring for both players.  If neither stands out, they might have missed a major opportunity with the reinforcements Mizzou is bringing in.

RPT: High upon a lofty hilltop,
Stands our Coppell High.
To Her we are ever loyal,
For Her we'll do or die.
Lift Her colors,
Speed them onward,
May they ever fly.
Hail to Thee our Alma Mater,
Hail to Coppell High!

Bill C.: It seems that Mizzou brings in a 6'2, 220-pounder in every class, with experience as a DB and a body that screams LB.  Ruise is this year's recruit.  A wonderful all-around athlete and the rare commit from the state of Florida, Ruise played quarterback for a very good Baker County squad, and showed all the speed and awareness to become a stellar college safety ... but after a summer in the Mizzou weight room, he'll probably two-a-days in August at about 230-235 pounds, looking to sneak onto the LB two-deep.

(Greg White, mentioned in the Running Backs walkthrough, could end up at linebacker as well, but for now he thinks he'll be a running back.)

Obviously the loss of a leader like Sean Weatherspoon will always hurt, but after years of suffering with iffy depth in the LB corps, Mizzou has broken through in a major way with this unit.  They've got a major physical presence with guys like Ebner and (hopefully) Tatum, they've got outstanding athleticism with Gachkar, Gooden and Bonner, they've got senior leadership with Lambert and Gettys, and they're building a ton of continuity to boot, with only one senior among the unit's top 7-8 backers.  This is unquestionably the strongest, most proven unit on the Missouri defense heading into 2010, and if you couldn't tell, we're pretty excited about these guys.