So how good were Mizzou's safeties in 2009?  It is honestly hard to say.  It appeared that the unit had the same strengths and weaknesses in 2009 as in 2008, despite a completely new cast of characters.  In came two JUCO transfers (Jasper Simmons, Jarrell Harrison), out went two senior starters (William Moore, Justin Garrett), yet Mizzou's safeties were still solid in run support but prone to breakdowns in over-the-top help.  As with the cornerbacks and every other Mizzou unit, virtually the entire unit returns intact in 2009 (minus Hardy Ricks, who missed half the season anyway, and Del Howard, who didn't see the field much), which is at least PROBABLY a good thing... 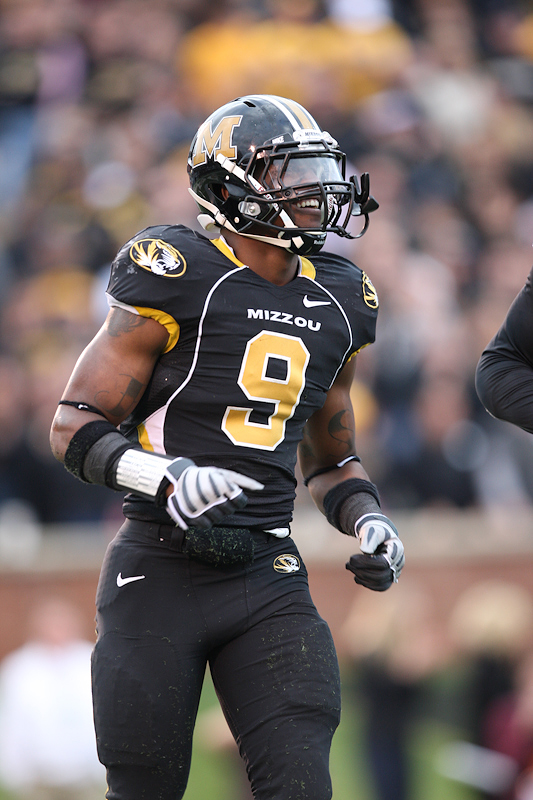 RPT: Jasper Simmons was somewhat of a frustrating case in his first season as a Tiger. At times, Simmons was Mizzou's most effective member of the secondary, showing up extremely well in run support and bailing out his cornerbacks on occasion (Hello Robert Steeples!). I don't know that Simmons had many breakdowns in 2009, but the breakdowns he had and/or the breakdowns of others he had to try to fix were EXTREMELY high profile. All told, I remain high on Simmons helping captain the defensive backfield.

Bill C.: When the Mizzou secondary succeeded the most in 2009, chances were good that Simmons was involved.  He was a playmaker near the line of scrimmage, he was absolutely wonderful against Oklahoma State, and he ended up with checks in the TFL, FF, FR, and INT categories in the season box score.  He improved all season in terms of kickoff returns (though I'm hoping a newbie like Tristan Holt or somebody gives him a run for the job in 2010), but he was just egregiously bad against Kansas.  It was an up-and-down season for Simmons, though I would like to point something out, if just to see RPT's head explode:

That's right, Simmons made far more plays in his first year after transfer -- both of the normal and disruptive variety -- than Pig Brown did.  Of course...

Simmons had a higher rate of disruptive plays per tackle than either Brown or Williams did in their first season after transferring from JUCO, but while Simmons didn't have to make as many plays as Williams (his LBs were much better) ... he still didn't make as many plays.  Nino Williams was a good safety, and I don't think we'd mind having a player just like him starting most years, Simmons' season was a bit disappointing simply because we needed a savior for the secondary, and he wasn't it.  He was only solid, not spectacular.  However, his hitting and play-making ability give you at least a little hope that the game slows down for him even further in 2010 and he takes a Pig-like leap in his senior season.

(And on a side note, how cruel was it to put somebody with the exact height and weight as Jeremy Maclin in the #9 jersey in 2009, even having him return kicks??) 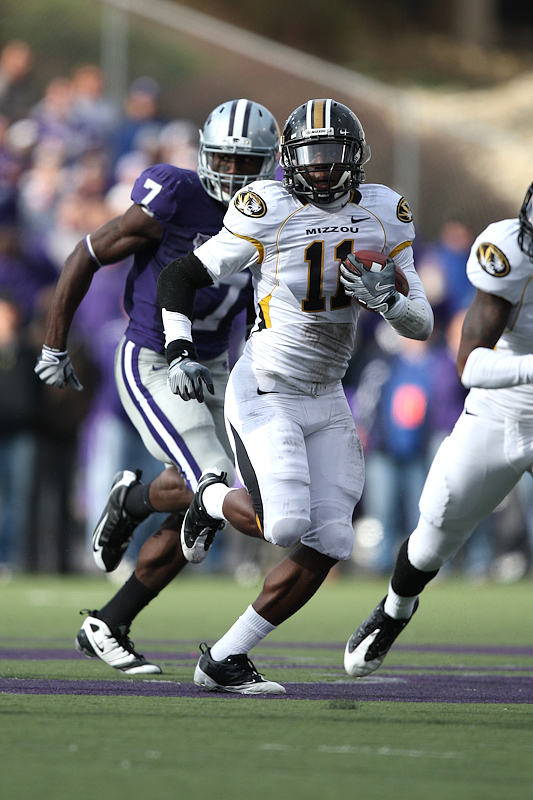 Bill C.: Easily the biggest safety in the stable, Harrison had what one would have to call a decent junior season.  He got started late due to a minor injury that caused him to miss the first three games, but when he got healthy, he pretty quickly moved into the starting lineup, where he was relatively nondescript.  He had his good moments (he was great against K-State and solid against the run most of the season) and his bad ones (he was the one who got burned over the top when Iowa State scored to take the lead right before halftime), but in all, he was serviceable.  I'd love to see him having to fend off multiple challengers for the starting spot, just to make sure he's truly a starter-level safety, but you could certainly do worse than Harrison.  (I've been all about the ringing endorsements in the write-ups for the secondary, haven't I?) 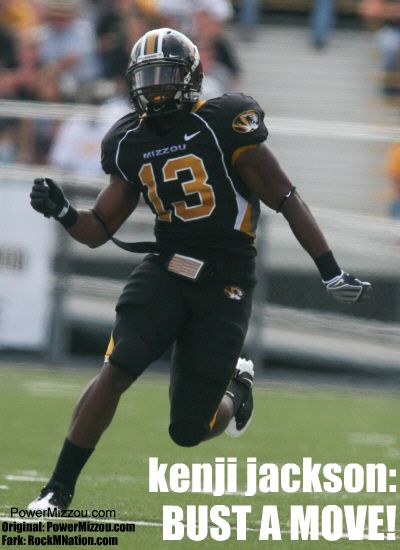 RPT: Kenji Jackson rivaled Will Ebner for "Player RPT loved the most after a freshman season in 2008." Jackson worked his was into starts in 2008 and found himself constantly in the mix and almost making plays on a regular basis. Naturally, we assumed he'd make up those couple of inches and turn "almost" plays into actual plays in 2009. Although I won't say that I thought Jackson was bad in 2009, I feel safe in saying that he slid toward regression last season. Jackson was semi-invisible, somewhat of both a blessing and a curse for an oft-struggling defensive backfield. I'd have to guess his ceiling remains extremely high, but now he has the burden of proof. He walked into a safety spot at the start of last season, but he could very well find himself staring up at Simmons and Harrison as he did for much of 2010 -- just like he did in the second half of 2009.

Bill C.: Are we sure Kenji actually played last year and didn't redshirt?

Okay, that was mean.  But still.

Bill C.: Whereas Mizzou had the audacity to get commitments from only 3- and 4-star players in the current recruiting class (therefore making it rather difficult to pick out sleepers), the 2009 class had two good, old-fashioned sleeper candidates in White and Bolden, both of whom committed late in the recruiting year, presumably after Mizzou had missed out on other targets.

Does that mean I'm not excited about these guys?  Au contraire!  Bolden's name came up in every single Texas Bowl practice report -- he seemingly made at least one huge hit every practice -- and I've been intrigued by White ever since I read this strangely unique quote from Steckel via PowerMizzou last Signing Day:

"I knew about Matt, he wasn't high on our radar from the standpoint of we were recruiting some other people. The thing about Matt, I think he's going to be a huge sleeper and why do I say that? Because he just turned 17 years old. He just turned 17. I know I'm getting old, but he looks like he's 12. He'll probably kill me if I say that. He's got huge hands, he's got great ball skills. You watch him make a play in his highlight film, he makes one of those Chase Coffman catches, he just one hands it for an interception...We knew about him and I went back into his school, we watched his old video again and he said, 'Think about it, this guy should be a junior right now.' So we brought it back to the staff and we went through our evaluation system and everybody kind of liked him."

First of all, I'd say he doesn't look a day younger than 15.  So there's that.  But for whatever reason that quote (and other things I read about him) piqued my curiosity.  It's not like I'm predicting he'll be a starter by the end of spring, but I really want to see what he can do.

As for Bolden, beyond the big hits, I'm a little confused about whether he's actually a safety, or whether he's made the move to linebacker.  I could have sworn he was still playing as a safety in December practices, but MUtigers.com has him listed as a linebacker, and they usually stay pretty up-to-date.  Regardless of the position he plays, Bolden's name was on the fingertips of Dave Matter, Gabe Dearmond, etc., in December, and I'm more excited about him now than when he signed. 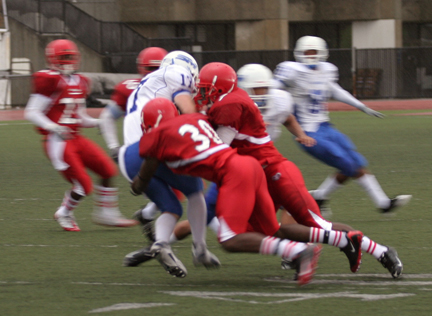 Bill C.: Stamped with a seal-of-approval from the two CCSF players Mizzou signed last year (Harrison and Josh Tatum), Walker is a big, physical safety in the mold of, well, Jarrell Harrison.  PowerMizzou's article on Walker's commitment mentions that he played as a freshman at CCSF, which is relatively rare for them.  And for depth purposes alone, if he is a Harrison type with slightly more upside, I'll take that.  I make it a point never to count on immediate contributions from JUCOs, but I don't think it would surprise anybody if Walker ended up heavily in the safety rotation in 2010. 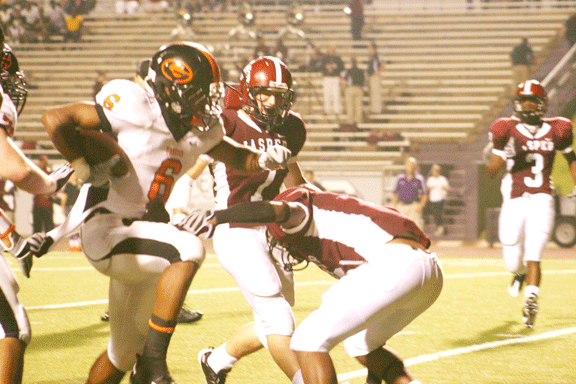 Bill C.: Webb's commitment to Mizzou was one of the things that led to Tristan Holt de-committing from Baylor and pledging with the Tigers, and while Holt ended up the higher-ranked recruit of the two, there is a lot to like about Webb.  Holt was an all-around athlete type -- he made plays here-and-there at WR, DB and in the return game -- but Webb has been an all-state caliber defender (at the 3A level in Texas) for a couple of years now.  (I read a rumor somewhere that he might have the frame to bulk up and play linebacker, but at 180 pounds, I'm going to assume that's not the case until I hear otherwise.)  Webb has proven himself both a winner and a play-maker, and I'm excited to see what impact he can make, and how quickly he can make it.

(PowerMizzou had a nice video package of both Holt and Webb a while back.)

Bill C.: One of the final commits of the 2010 class, Easterly is another "Thank you, Ron Zook" commit.  He committed to Illinois in mid-June, then started getting a wandering eye during the Illini's awful 2009 campaign.  He visited Columbia in December and pulled the trigger the next week, switching from orange and white to black and gold, just like Dexter McDonald.

Easterly's most intriguing asset has to be his overall length.  Listed between 6'3 and 6'5 by different services (which probably means he's 6'2, but I digress), he is very tall for a safety, but he doesn't appear to run with the stiffness you would fear from a bigger player.  And hey, if he can stand 6'3 and run like he's 5'11, that's a pretty lovely combination.

Oh, and he can hit.  If you can stand the slo-mo (I could only make it halfway through), here's a pretty good highlight film from his junior year.

All in all, it wouldn't be a complete surprise to see Easterly end up at a different position than safety, but if he can put on a little weight and run well enough to be a contributor, you certainly have to like the thought of a smooth, 6'3, 205-pound safety, no?

As with most units, we know that Mizzou's safeties will at least be as good in 2010 as they were in 2009 (that's what happens when you have such continuity in personnel), and if everybody improves at a level proper for their year of experience, the unit looks much deeper and at least marginally improved.  Gone are Hardy Ricks and Del Howard (who combined for all of 9.0 tackles last year), and in their place step a JUCO transfer with a resume extremely similar to Jarrell Harrison, 1-2 redshirt freshmen who made a splash on the scout team, and a player in Kenji Jackson who might be emerging from a sophomore slump.

Obviously the secondary needs to improve a decent amount in 2010, but at the very least we know that we can expect a similar level of play.  All four starters return, and it looks like they will be pushed by various youngsters.  Despite the strange fact that the oldest unit for Mizzou (all four returning starters will be seniors in 2010) also appears to be the weakest, there is reason for at least marginal hope here.  And as mentioned in the comments to yesterday's Cornerbacks Walkthrough, a pass rush that looks to be improved in 2010 can only help matters in the secondary.