Share All sharing options for: Remembering Jeffrey, A Year Later 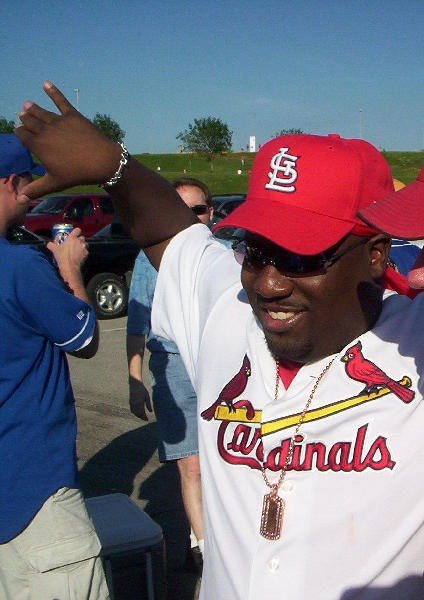 February is always a hard month. Even though you think winter should be starting to slow up, you slowly come to the realization that you've got weeks of cold still coming at you.  The days are still far too short.  Football is over.  Et cetera.  For all the normal reasons, February is rough.  Last year, February became forever tougher, as Jeffrey Crawford, friend to everyone he met, died the weekend of February 1.

My friendship with Jeffrey was as strong as it was unlikely.  When I first met him, it was a bit of a novelty, meeting the guy on Tigerboard who overreacted to everything good and bad, and gave everybody nicknames.  (I was Hova.  Why?  I have no idea.  Like that matters.)  We met him at the Black and Gold basketball scrimmage before the 2003-04 season, then on a whim invited him to go to Shreveport with us for the Independence Bowl.

It didn't take people very long to start collecting their own Jeffrey stories.  He was to genuineness and wide-eyed honesty what Bill Brasky was to greatness, only the stories were all 100% true.

Now, I don't want to sugarcoat things too much. Jeffrey really did drive me absolutely crazy sometimes, more than almost any other friend I've ever had.  He was the one person who could suck me into a full-fledged, reactionary argument after losses, be it on Tigerboard, PowerMizzou, Facebook chat, e-mail, whatever.  Only, in the middle of it, I'd get an e-mail that said something like "Hey, I decided I should get into Pearl Jam.  What are the 12 Pearl Jam songs I need to download?  I'm asking somebody else the same question, and I'll cross reference the lists to figure out the first songs I should download."

Suddenly, I would be Ricky Bobby.  "Well, there's Porch, obviously.  Thumbing My Way is very underrated.  Rearviewmir--hey, I'm still mad at you!  I don't even know why I'm talking to you right now!"

Jeffrey, because you were such a consistent person, and because you never failed to stray from exactly who you were, I look back over the last year, and I know exactly how you would have reacted to everything that happened.  You would have been so unbelievably excited after the Kansas win last year (and disconsolate after the Kansas loss).  You would have been asking me about when we were leaving for the Final Four if Mizzou beat UConn.

(And to Seth, who had to make some of the most painful, gut-wrenching phone calls imaginable that weekend, calls to both family members and beloved friends, I probably haven't shared just how proud of, impressed by, and sympathetic for you I was that day.  I hate that you had to go through all of it, but I love you that much more for it.)

The first basketball game after Jeffrey's death, Mizzou won at Texas.  A week later, they came home and beat Kansas.  They ended up going 13-3 down the stretch and came within about five minutes of the Final Four.  I couldn't help but think about him the whole time.  It was hard not to imagine him pulling strings up in whatever version of heaven I believe in.  I still hear his voice in my head when something good happens to Mizzou, and I really hear his voice when something bad happens.  Jeffrey never lost his child-like hope and emotion when it came to sports, even while growing up, getting better and better jobs, and befriending more and more good people.  It was his best and worst quality, so to speak, and I sometimes wish I were more capable of letting myself go in those moments.  Even though I do still feel him and feel his reactions to things as if he were here, he's not, and I miss him dearly.