Today, we take on the almost impossible task of determining the best performance of the season for the first receiver on the list: Danario Alexander. Nominees after the jump.

- Danario Alexander vs. Nevada: We got our first look at the brilliance to come from 'Nario in a 10-catch, 132-yard debut against Illinois, but that was Blaine Gabbert's day. Alexander grabbed the headlines for himself on a Friday night in Reno, propelling himself to his first Big 12 Offensive Player of the Week award of the season.

- Danario Alexander vs. Oklahoma State: On a night where everything just seemed a little out of a sync for the entire evening, at least Danario's numbers looked right. Pokes defenders were having trouble catching him, and even when they did and grabbed a hold of his facemask, they still couldn't bring him down:

- Danario Alexander vs. Colorado: Picking up from his catch and run in the Nevada game, the Colorado game afforded us the opportunity for another "Oh, Danario caught the ball after 15 yards and then ran away from everyone untouched" highlight. The Buffs got a close-up view of the afterburners on his way to the first of his two touchdowns on the day.

- Danario Alexander vs. Baylor: Nick Florence was the Big 12 Offensive Player of the Week after Baylor's win over Missouri, but his primary competition for that award came from the other side of the field. The gem of the day was his 84-yard catch and run.

- Danario Alexander vs. Kansas State: He was unquestionably the best player on the field in Manhattan in a big rebound victory for the Tigers. Behold Bill Snyder Family Stadium Nario's Playground:

The real question is determining which of his three touchdowns was most noteworthy. Was it Nario going over top to steal a bomb away from being a sure interception for Tysyn Hartman? Was it the beautiful corner route for the touchdown to end the first half? Was it the long distance slant and spin for his third touchdown? Should we take into account his Jason WItten-esque helmetless fight for a first down?

- Danario Alexander vs. Iowa State: After two consecutive 200-yard games, it says a lot about Alexander's season that we can look at an 11/173/1 day against Iowa State and respond with "meh." It was another fantastic day for Alexander, who drew comparisons to a mix of Jim Brown and Usain Bolt from ISU coach Paul Rhoads after the game. Playing his final home game at Faurot Field, Nario broke Jeremy Maclin's record for receiving yards in a season, much to the cha-grin (BOOO BAD PUN) of the ISU mascot: 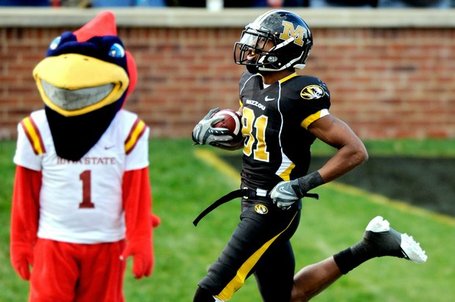 - Danario Alexander vs. Kansas: It's scary to think about how Missouri's season might have gone without Danario Alexander, and no game is scarier to think about than Mizzou's last second win over the Beaks. You can make the argument that in 120 minutes of football, Alexander had more success at Arrowhead Stadium in 2007 and 2009 than the Chiefs did. Nario used a 68-yard catch-and-run touchdown to put Missouri on top for the first time, putting the team on his back in the second half in the midst of an incredibly thrilling shootout with Dez Briscoe.