Today, we look for Jerrell Jackson's biggest game. Nominees after the jump.

- Jerrell Jackson vs. Furman: To be fair, though, who didn't have a good game against Furman?

- Jerrell Jackson vs. Colorado: Jerrell only had one catch for five yards against the Buffs. Why is that performance on this list? Just so I have an excuse to embed this:

- Jerrell Jackson vs. Kansas State: It's surprising to no one that Jackson was playing second fiddle to Alexander in Manhattan, but against Kansas State, JJ was the secondary threat we all hoped he'd be.

- Jerrell Jackson vs. Iowa State: Perhaps buoyed by his performance the previous week, Missouri tried to get the ball into Jackson's hands on three of the first five plays against Iowa State, resulting in a 5-yard rush and two incomplete passes. His shining moment on his career day would come in the 3rd quarter, when he hauled in a 70-yard touchdown pass and ran free down the West sideline to erase Mizzou's 7-point halftime deficit (Photo by RMN's Bill Carter): 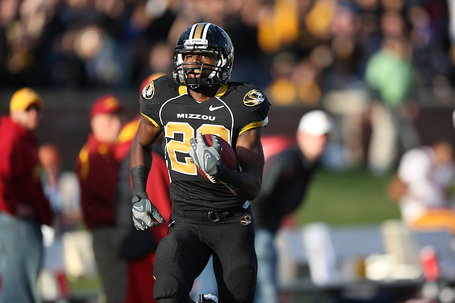 - Jerrell Jackson vs. Kansas: The 5-for-54 receiving line wasn't all that impressive, although it did once again represent a step forward in his growth as a solid second option. His biggest contribution came on the ground, when he took a jet sweep around right end, followed a block by DeVion Moore, and outran several KU defenders to the endzone for a 37-yard touchdown (Photo by Bill Carter): 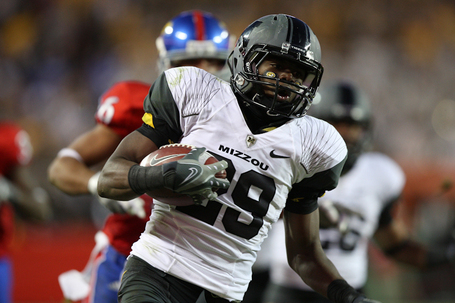