Share All sharing options for: Mizzou in the '00s: Best Moments of the Decade, #5

More than any other moment on this list, Moment #5 in the top ten belongs to the fans.  They were not only the sixth man in this game, but the seventh, eighth, and ninth too.  The team itself tried multiple times to give this game away, but the crowd simply wouldn't let them.  It was a transcendent moment, not only for the 2008-09 Missouri basketball team, but also Mizzou Arena itself.  An arena or stadium gets its personality from the moments that have happened within it, and by the morning of February 10, 2009, Mizzou Arena officially had personality.  Even more than the game itself, that's why this win finds its way into the top five.

Going by rankings, it's pretty safe to say this was the biggest game in Mizzou Arena history heading into the proceedings.  Upstart Mizzou was 20-4 and ranked No. 17 in the country; meanwhile, a Kansas team that had started slowly was starting to gain steam.  They were 19-4, ranked No. 16 in the country, and 8-0 in Big 12 play.  Young Cole Aldrich was starting to dominate, and Sherron Collins was the team's go-to guy.  The atmosphere was intense, and Mizzou seemed a little cowed by the moment, resulting in super sloppy play.  Heading into the first TV timeout, the score was 2-2.  Things picked up a little, and Mizzou led 11-10 with 12:00 left, but when KU started landing some haymakers, Mizzou froze up.

Over a seven-minute span, KU outscored Mizzou 16-4, and Mizzou was lucky that the damage wasn't worse.  KU still wasn't shooting very well, but they were dominating the glass, and Mizzou simply had no idea where to go with the ball on offense.  Even good defense isn't going to win you any games if you can't score.

With 5:00 left and Mizzou down ten, the swarming MU defense stepped up its play even further, but the offense still couldn't do anything.  KU missed nine of their last ten shots of the half, but extended their lead to 14 at half thanks to the fact that Mizzou could manage only one free throw in that span.  This was as ugly a half as Mizzou had ever played.

I think the reason I get so amazingly frustrated with Mizzou fans sometimes for the anger (can't tell you how many times I heard "Screw you, Pinkel!!" screamed at football games this year, and how stupid it sounded every single time) and strange sense of entitlement is that I've seen what can happen when Mizzou fans use their intensity for good instead of evil.  Despite one of the worst offensive halves of basketball Mizzou had played under Mike Anderson, Mizzou fans simply wouldn't let Mizzou fall, and in the second half, Mizzou started to figure things out.

Kim English went on a personal 4-0 run to start the second half, then the teams started trading blows.  KU would stretch the lead back to 14, Mizzou would cut it to 8.  For the most part, the lead hovered around ten, and it started to feel like Mizzou was losing its chance to catch up.  After the 12-minute timeout, however, Mizzou scored a knockdown. Leo Lyons scored six straight points, and a Marcus Denmon steal led to two Zaire Taylor free throws.  KU's lead was only 46-43, and the arena was shaking.  The Jayhawks, however, responded.  An 8-0 run capped by an and-one from one time Mizzou recruit Travis Releford gave KU back their cushion -- it was 54-43 KU with just 8:21 left.  In my boxing score-keeping, it was the rare four-knockdown (two for each team) round.  It was almost comical how much this game was swinging, but one thing was certain: KU was still in control.  Or not.

Instead of icing the game away, Kansas started to wear down.  Over a 3-minute span, KU committed three turnovers and missed four shots.  Thanks to three free throws and an unexpected 3-pointer by DeMarre Carroll, the lead shrank right back down to three points, 54-51.  Yet again, however, it was KU's turn for a momentum swing.  Mizzou missed six straight shots and committed three turnovers of their own.  The defense was still good, but KU managed four free throws to expand the lead back to seven.

That's when Matt Lawrence made potentially the most underrated play of the game -- following a DeMarre Carroll miss, Lawrence inexplicably outfought Aldrich for the rebound and scored a layup.  58-53.  A turnover by Sherron Collins led to a DeMarre Carroll layup.  58-55.  Adrich missed a shot, and J.T. Tiller outfought Markieff Morris for the rebound, drawing a foul and making a free throw.  58-56.  Sherron Collins missed two free throws (another underrated moment), then Leo Lyons drew a foul and made two super-clutch freebies of his own.  58-58.  Sherron Collins missed a chip-shot and, after grabbing another rebound, J.T. Tiller drained a jumper (you just knew it was going in, too), and somehow, someway, Mizzou had gone on a 9-0 run to take the lead.

KU called timeout, then responded.  It wasn't Collins, it wasn't Aldrich ... it was Mario Little who made a baseline 17-footer.  (I was just praying that they wouldn't take a 3-pointer, and they didn't.)  With 0:23 left, Mizzou called timeout.  You know the rest. 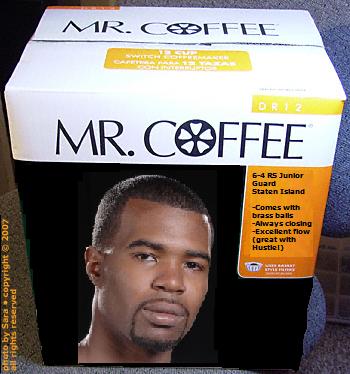