Today, we examine the options for filling out our offensive skill positions with a fifth option, whether it be a fourth receiver or a second running back. Nominees after the jump.

- Wes Kemp vs. Illinois: Well before Wes Kemp disappeared for most of the Big 12 season after that crucial drop in Stillwater, he gave us a glimmer of hope in St. Louis. Kemp hauled in the first touchdown pass of he and Blaine Gabbert's careers when he rumbled and stumbled down the sideline for a 49-yard touchdown reception in the first quarter against the Illini.

- Kendial Lawrence vs. Bowling Green: A resurgent Blaine Gabbert and a methodical Derrick Washington may have had the most to do with Missouri's comeback win against Bowling Green, but don't sleep on Lawrence's contribution to the win. Lawrence got the spell duty as DeVion Moore missed the game with an injury. It was the first of two consecutive weeks in which Lawrence would have touchdowns called back (Photo by Bill Carter): 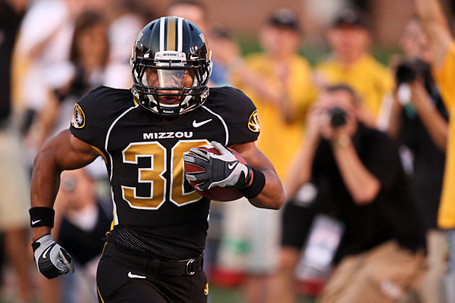 - Kendial Lawrence vs. Furman: Again, another solid day for Lawrence with another touchdown called back. The numbers might have even been better had Missouri not wanted to get Gilbert Moye some fourth quarter carries.

- Wes Kemp vs. Nevada: To be perfectly honest, I don't recall much about Kemp's performance against Nevada, but I'm not going to argue with the numbers. Even though he had receptions of 48 and 33 yards during the game, don't undervalue the importance of his 18-yard reception on second down on Missouri's dagger drive.

- Kendial Lawrence vs. Nevada: He didn't really have a great statistical performance, but I felt I needed to bring up the catch he made at 2:15 of this video:

- De'Vion Moore vs. Colorado: There's something about Colorado that brings out the best in De'Vion Moore. In 2008, it was a 55-yard touchdown run on his first carry against the Buffs. In 2009, it was simply making the most of limited touches. His 31-yard scamper on the first play of a drive beginning at the CU 33 put Mizzou down at the two yard line, setting up a Danario Alexander TD reception to put the Tigers up 21-0 in the first quarter.

- Wes Kemp vs. Navy: On an otherwise forgettable afternoon, Wes Kemp's 56-yard screen and run was one of Missouri's few highlights on the day.