Thanks to the magic of ESPN3.com and SkyCam, I was able to go back and take a look at Missouri's 36-27 win against Oklahoma. All week, you've been seeing glowing articles and accolades praising the Missouri offensive line for its performance against the Sooners. Here's one miniscule example of why the praise is completely warranted.

Missouri comes out with trips left, appearing to draw a linebacker in addition to bracket safety help over top. More importantly, Missouri comes out in its six-lineman power set, as indicated by the spot shadow on "tight end" Elvis Fisher. With the prevalence of Missouri's six-man sets in the running game in the last three weeks, this week against Nebraska HAS to be the game in which the opponent finally keys on the run against these packages.

... which means you shouldn't be surprised if a pass ends up in the vicinity of Elvis Fisher or Justin Britt in the red zone sometime soon. Just sayin'. 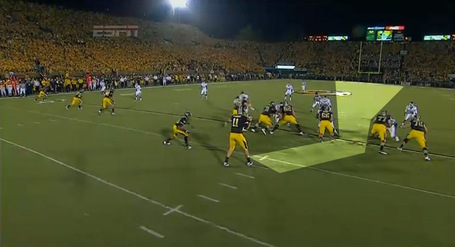 At the snap, you already see Missouri winning the trench battle. None of the Missouri receivers are more than one step out of their release and the entire Missouri offensive line appears to have their men engaged and in control. Presuming the linebacker just past No. 66 Austin Wuebbels is neutralized, Moore has a big running lane to work with. 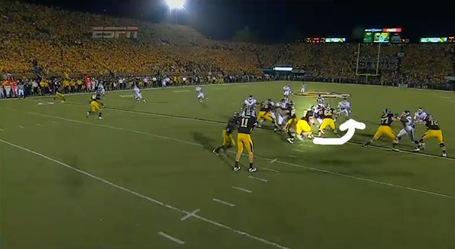 Remember what I said about neutralizing that linebacker? Well, after briefly chipping the left defensive tackle to buy Tim Barnes time after the snap, left guard Jayson Palmgren immediately pulls around into the vacated gap. Barnes has gotten his man upfield, Wuebbels has the playside defensive tackle pushed out of the play, and Dan Hoch has his man completely neutralized. Gorgeous. 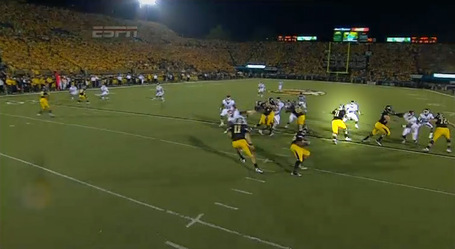 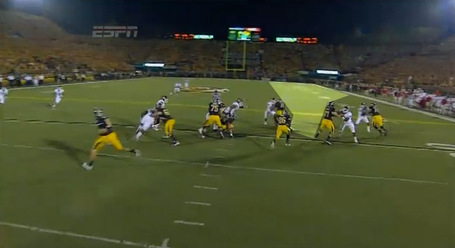 Palmgren engages the linebacker. Hoch has the defensive end turned. Beyond Hoch, Fisher continues to drive a defender out of the play. Your move, De'Vion Moore. 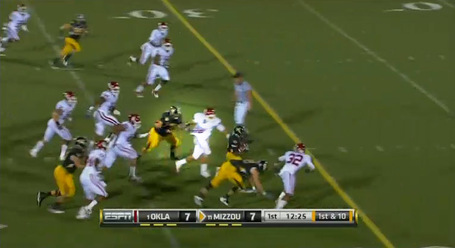 Moore rumbles for 20 yards and the Missouri rushing attack has some early momentum. Of course, the highlighted fistful of jersey Palmgren has there certainly didn't hurt.

Stay tuned: Later in the week, I'll be looking at Nebraska's struggles with Oklahoma State's interior running game last week and questioning whether or not their problems end once Kendall Hunter isn't on the other side of the ball.