Video Breakdown: Are the Huskers vulnerable up the middle?

Share All sharing options for: Video Breakdown: Are the Huskers vulnerable up the middle?

This post is sponsored by Samsung, who will be featuring posts around the SB Nation network today about fandom being enriched by the intersection of sports and technology.

Nebraska isn't lacking in defensive speed, and combined with the two-linebacker nickel system (called "Peso," just like the currency which coincidentally exchanges for close to a nickel) the Pelini brothers have adopted for 2010, the Husker defense is predicated on using that speed to beat blockers to the ball. In doing so, Nebraska really trusts its front six to make plays, as they gamble on using the extra man in the secondary to help slow the aerial attacks that litter the Big 12. Save for a breakdown here and there, it's been a worthwhile gamble for the Huskers, who are second in the conference in total defense.

But in reading the thoughts from several Husker sites around the web, there seems to be at least some small concern about the Huskers' susceptibility to the run up the middle. Kendall Hunter ran for 201 yards (7.7 per carry) last Saturday, most of them targeted between the tackles. So for the moment, the book on Nebraska is to run at them, not around them. 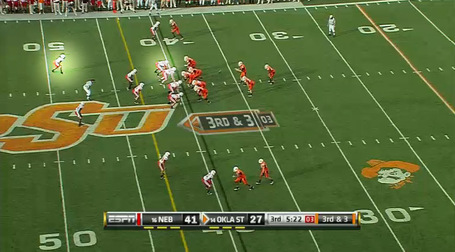 First things first: You'd probably face better odds betting against a sellout at Memorial Stadium in Lincoln on Saturday than you would betting on Missouri coming out in the formation shown by the Pokes here. Oklahoma State comes out with the Pistol equivalent of the offset strong I-formation, with a wideout (Justin "Go Ahead And Try Not Comparing Me To Danario Alexander" Blackmon) right and stacked receivers left.

We can see Nebraska's base defense in this shot. The right end lines up in what appears to be a 5-technique, face up with the left tackle. Because of the angle, the defensive tackles are a little bit harder to gauge, but they're of slightly less interest here. The highlighted left end is the one of note, as he slides into what appears to be a 4-technique on the inside shoulder of the right tackle. I'm not sure whether this was a function of being to the weakside of the formation or the shortside of the field. Either way, you can tell Nebraska wants to watch the strongside and leave the weakside to the highlighted safety appearing at the top left of the screenshot above. 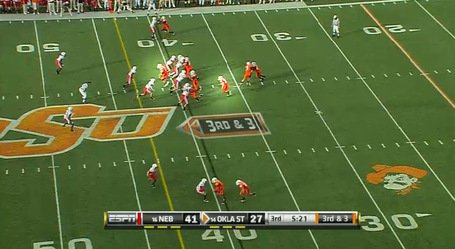 Oklahoma State mans up on the four defensive linemen, not requiring a double team to handle the Huskers' four down men. That leaves the two highlighed Cowboys (one lineman, one "second back" -- thou shalt not say "fullback") to handle the two remaining players (the linebackers) in the box. This is where Nebraska comes to miss that third linebacker. 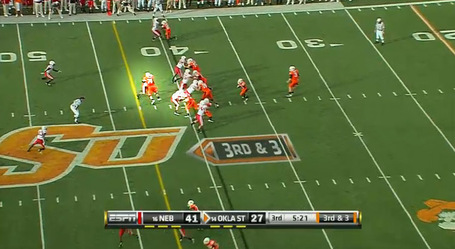 Both second-level blocks are engaged, and the tackle turns the end outside. It's Kendall Hunter time. (//shudders remembering MU/OSU '08) 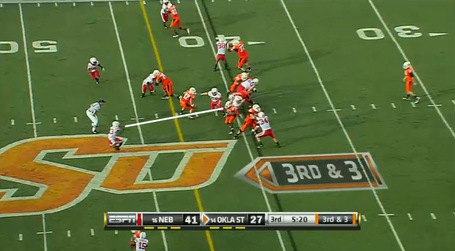 A last ditch-effort by the defensive tackle behind Hunter does nothing. Potential Big 12 defensive player of the year Lavonte David is tied up by the lineman at the first-down marker outside the right hashmark. The other backer (Will Compton) has gotten away from the second back and tries to get back into the play. Hunter's eyes are dead set on the safety between he and the endzone. 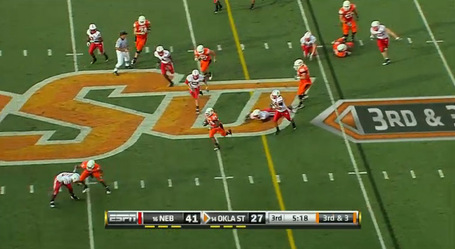 Yeah, Compton's not catching Hunter. Not helping matters is that one stutter step and cut leaves the safety kissing the first down marker. 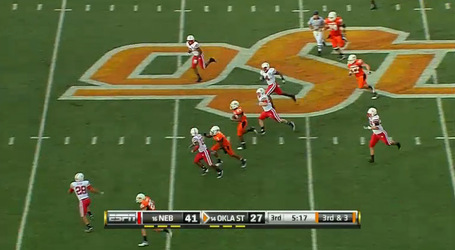 Now the chase is on. Nebraska eventually catches up to Hunter, but not before he's 28 yards downfield.

Nebraska trusts its players and trusts its scheme -- serious, serious trust. On this particular play, Nebraska faces 3rd-and-3 against one of the Big 12's premier tailbacks and dares Oklahoma State to run by putting only six in the box. Nebraska's defense has the speed (especially with the way Lavonte David has been playing) to match teams sideline-to-sideline, which could mean trouble for Missouri's "Josey to the sideline" play. But if this one small example can provide hope, it is this: Missouri controlled the line of scrimmage against Oklahoma, and was extremely effective running the ball up the middle, thanks in large part to Missouri's ability to pull linemen into holes to block at the second level.

The spread offense has been and will always be a numbers game. If Nebraska leaves six in the box, they're daring Missouri to test them up the gut. Is Mizzou ready for a repeat performance or a rude awakening on the ground?

Note: Nebraska fans, please help me out with the analysis here. Is the question about Nebraska's inside run defense valid? Your input would definitely be a big help as we prepare for Saturday.