Share All sharing options for: Video Breakdown: Collin Klein and Daniel Thomas on the zone read

This post is sponsored by Samsung, who will be featuring posts around the SB Nation network today about fandom being enriched by the intersection of sports and technology. Today, we hope to Enhance Your Experience by examining Kansas State's three primary rushing concepts featuring ground threat QB Collin Klein.

All images can be enlarged by clicking on the snapshots.

So, you're ready to defend Collin Klein on the ground, right? Great! Let's see what Kansas State has waiting for you. 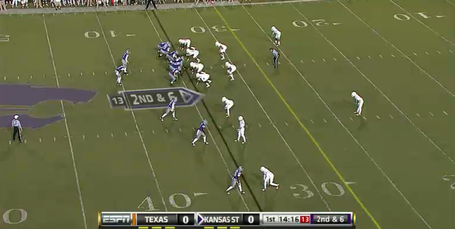 Kansas State overloads the right side of the field with trips receivers and a tailback to the right of center and a tight end in-line on the left. Texas counters with what is effectively six in the box with a safety in close proximity if necessary (SPOILER ALERT: Totally necessary). 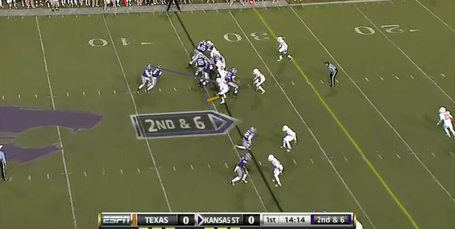 Immediately we see the entire crux of the zone read concept. If you click the image above, you'll see Klein's vision stationed directly on the strongside defensive end. If the end crashes down on the tailback Daniel Thomas, Klein will keep the ball and shoot the gap vacated by the end. If he stays home in his gap, Klein will give the ball to Thomas. 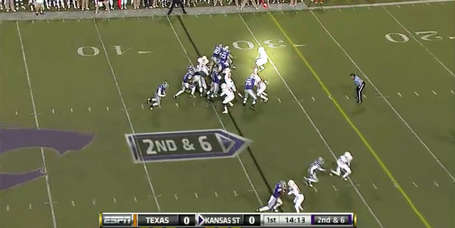 The end stays home respecting Klein, so Klein gives the ball on the read. Five of the front six (except the end keyed on the play) are engaged, and the highlighted safety up top is the next/last line of defense. 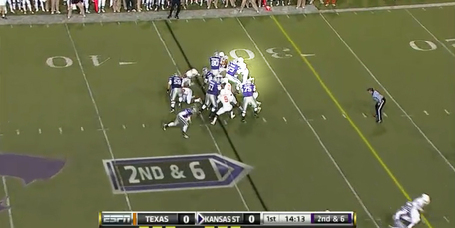 Thomas appears to be caught in a pileup momentarily, though a lineman gets to the second level to engage the charging safety just in case. 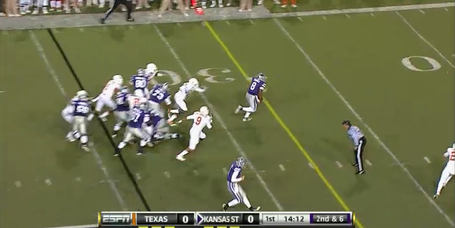 Thomas emerges from the pile as Texas defensive coordinator Will Muschamp blows thirteen blood vessels in his brain. Thomas rumbles for a touchdown on the second play of the game, and Texas fans are left wondering when the pain of this season will become eligible for assisted suicide in their healthcare plans.

Here's a look from another angle: 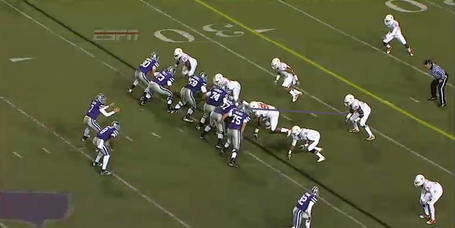 Before the snap even reaches Klein, you can see the play design from the offensive line. Tackle Clyde Aufner (No. 75) completely ignores the right defensive end and heads straight for the second level to engage the linebacker.

A clear shot of the end staying home. Your move, Klein. 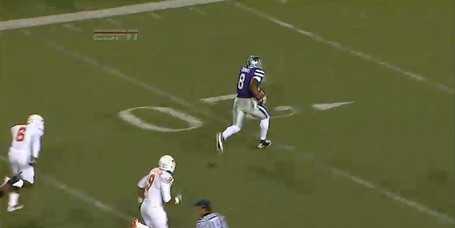 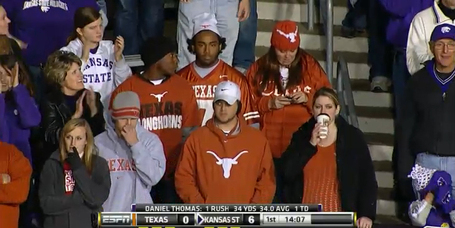 This moment of unfathomable sadness brought to you by the zone read. DON'T LET THIS BE YOU, FAUROT FIELD.

So, how do you stop the zone read? That remains a matter of debate. One concept frequently employed is known as the scrape exchange, in which the end will automatically crash down the line of scrimmage and the linebacker will immediately push over to the end's open gap. I highly suggest you check out Smart Football's article on this very concept.

As with any option-based or read-based offense though, defensive solutions are only temporary. Georgia Tech coach Paul Johnson is a master of subtle changes to the reads and blocking schemes, as he'll often run the exact same plays out of the exact same looks opting to change only one single blocking assignment, which can completely blow up any defensive adjustments (this time, I refer you to another article from Smart Football).

It's hard to stay one step ahead of the option play; the key is making sure you're not one step behind. Dave Steckel could be sitting on either a gold mine or a ticking time bomb with the athleticism he has at defensive end and linebacker. We won't know which until midday on Saturday.